From Wikipedia, the free encyclopedia
(Redirected from Salon.com)
American progressive news and opinion website focusing on U.S. politics and culture

Salon is an American liberal news and opinion website, created by David Talbot in 1995. It publishes articles on U.S. politics, culture, and current events and has a politically progressive/ liberal editorial stance. [3] [4] [5] [6]

According to the senior contributing writer for the American Journalism Review, Paul Farhi, Salon offers "provocative (if predictably liberal) political commentary and lots of sex." [8]

In 2008, Salon launched the interactive initiative Open Salon, a social content site/blog network for its readers. Originally a curated site with some of its content being featured on Salon, it fell into editorial neglect and was closed in March 2015. [9]

Responding to the question, "How far do you go with the tabloid sensibility to get readers?," former Salon.com editor-in-chief David Talbot said:

Is Salon more tabloid-like? Yeah, we've made no secret of that. I've said all along that our formula here is that we're a smart tabloid. If by tabloid what you mean is you're trying to reach a popular audience, trying to write topics that are viscerally important to a readership, whether it's the story about the mother in Houston who drowned her five children or the story on the missing intern in Washington, Chandra Levy. [10] 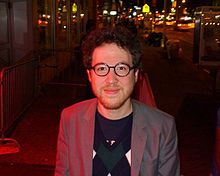 Alex Pareene, who wrote about politics for Salon, in New York in 2012

Salon was created in the wake of the San Francisco newspaper strike of 1994, by former San Francisco Examiner arts and features editor David Talbot who wished to explore the potential of Web. [17] [18] [17] It launched as salonmag.com [19] in November 1995. In its early days, readers noticed a specifically Northern California flavor. In 1996, Talbot agreed: "We swim in the soup of San Francisco. There are a lot of odd fish we've plucked out of the bay here and it gives us some of that Left Coast, Weird Coast style." [20] Time magazine named it one of the Best Web Sites of 1996. [21]

Salon purchased the virtual community, The WELL, in April 1999 (switching to its current URI salon.com at roughly that time), and made its initial public offering (IPO) of Salon.com on the NASDAQ stock exchange on June 22 of that year. [22] Subsequently, for the month of October 1999, Nielsen/NetRatings reported that Salon had over 2 million users. [23]

Salon Premium, a pay-to-view (online) content subscription was introduced on April 25, 2001. The service signed up 130,000 subscribers and staved off discontinuation of services. However, in November 2002, the company announced it had accumulated cash and non-cash losses of $80 million, and by February 2003 it was having difficulty paying its rent and made an appeal for donations to keep the company running. 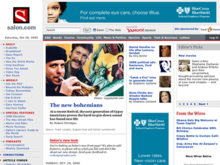 On October 9, 2003, Michael O'Donnell, the chief executive and president of Salon Media Group, said he was leaving the company after seven years because it was "time for a change." When he left, Salon.com had accrued $83.6 million in losses since its inception, and its stock traded for 5¢ on the OTC Bulletin Board. David Talbot, Salon's chairman and editor-in-chief at the time, became the new chief executive. Elizabeth "Betsy" Hambrecht, then Salon's chief financial officer, became the president. [24]

In July 2008, Salon launched Open Salon, a "social content site" and "curated blog network." [25] It was nominated for a 2009 National Magazine Award [26] in the category "best interactive feature." On March 9, 2015, Salon announced it would be closing Open Salon after six years of hosting a community of writers and bloggers. [9]

Salon closed its online chat board "Table Talk" without stating an official reason for ending that section of the site on June 10, 2011. [27]

On July 16, 2012, Salon announced that it would be featuring content from Mondoweiss. [28]

Salon Media Group sold The WELL to the group of members in September 2012. [29]

Salon has been unprofitable through its entire history. Since 2007, the company has been dependent upon repeated cash injections from board Chairman John Warnock and William Hambrecht, father of former Salon CEO Elizabeth Hambrecht. [30] [31] [32] [33] During the nine months ending in December 31, 2012, these cash contributions amounted to $3.4 million, compared to revenue in the same period of $2.7 million. [34] In December 2016 and January 2017, the company was evicted from its New York offices at 132 West 31st Street, a block from Madison Square Garden, for non-payment of $90,000 in back rent. [35] [36] In February 2017, Spear Point Capital invested $1 million into Salon, taking a 29% equity stake and three seats on the company's board. [37] As of April 2019, the company had failed to file its form 10-K for the fiscal year ending March 31, 2018. On August 30, 2019 Salon.com was sold for $5 million by Salon Media Group ( OTCQB:  SLNM) to privately held Salon.com, LLC which is owned by Chris Richmond and Drew Schoentrup. [38] [39]

Aspects of the Salon.com site offerings, ordered by advancing date:

In March 2016, while American tourist Otto Warmbier was imprisoned in North Korea for allegedly trying to steal a propaganda poster there, the site posted an article about him headed: "This might be America's biggest idiot frat boy: Meet the UVa student who thought he could pull a prank in North Korea." [41] After Warmbier's death, the article was removed. [42] [43] Andrew O'Hehir, the executive editor of Salon, said the article was a summary of the opinions of television comedian Larry Wilmore. [42]

In September 2015, Salon published an article written by Todd Nickerson, moderator of Virtuous Pedophiles, about his experiences with being a non-offending pedophile, titled: "I'm a pedophile, but not a monster." [44]

This caused controversy at the time, with some commentators considering it "pro-pedophile" [45] and Nickerson himself subject to a "backlash." [46]

This article, along with an accompanying video [47] and a follow-up article, [48] was deleted in February 2017, supposedly to protect Salon from accusations of hypocrisy when covering Milo Yiannopoulos's alleged support for pedophilia, [45] although Salon Media Group CEO and Salon acting editor-in-chief Jordan Hoffner told New York magazine it was due to unspecified "new editorial policies." [45]

In February 2018, it was noted that Salon was preventing readers using ad blockers from seeing its content. Such users are offered a choice of disabling their blocker, or allowing Salon to run an in-browser script, using the user's resources, to mine Monero, a form of cryptocurrency. [49] [50]