From Wikipedia, the free encyclopedia
(Redirected from SR 595 (NV))
Highway in Nevada 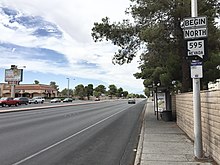 Rainbow Boulevard was originally known as Lorenzi Boulevard north of Westcliff Drive. The road got its current name sometime after US 95 (Oran K. Gragson Freeway) was built within the area (a separate Lorenzi Street exists just east of it, from Westcliff to Charleston).

RTC Transit Routes 101: Rainbow and 219: Craig (continuations of each other north and west respectively) function on this road.

Template:Attached KML/Rainbow Boulevard (Las Vegas)
KML is not from Wikidata