From Wikipedia, the free encyclopedia
(Redirected from Russian American)
Americans who trace their ancestry to Russia

Russian Americans are Americans who trace their ancestry to Russia, the former Russian Empire, or the former Soviet Union. This means that ‘Russian’ does not necessarily refer to East Slavic ethnic Russians. The definition can be applied to recent Russian immigrants to the United States, as well as to settlers of 19th-century Russian settlements in northwestern America.

After Russian America (now territory part of present-day Alaska) was sold to the United States in the mid-nineteenth century, waves of Russian immigrants fleeing religious persecution settled in the United States, including Russian Jews and Spiritual Christians. These groups mainly settled in coastal cities, including Brooklyn ( New York City) on the East coast, and Los Angeles, San Francisco, and Portland, Oregon, on the West coast.

Emigration was very restricted during the Soviet era, though in the 1990s, immigration to the U.S. increased exponentially.

According to the Institute of Modern Russia in 2011, the Russian American population is estimated to be 3.13 million. [3]

Many Russian Americans do not speak Russian, [6] having been born in the United States and brought up in English-speaking homes. In 2007, however, Russian was the primary spoken language of 851,174 Americans at home, according to the U.S. Census. [3] According to the Davis Center for Russian and Eurasian Studies at Harvard, 750,000 Russian Americans were ethnic Russians in 1990. [7]

The New York City metropolitan area has historically been the leading metropolitan gateway for Russian immigrants legally admitted into the United States. [8] Brighton Beach, Brooklyn continues to be the most important demographic and cultural center for the Russian American experience. However, as Russian Americans have climbed in socioeconomic status, the diaspora from Russia and other former Soviet-bloc states has moved toward more affluent parts of the New York metropolitan area, notably Bergen County, New Jersey. Within Bergen County, the increasing size of the Russian immigrant presence in its hub of Fair Lawn prompted a 2014 April Fool's satire titled, " Putin Moves Against Fair Lawn". [9]

Sometimes Carpatho-Rusyns and Ukrainians who emigrated from Carpathian Ruthenia in the 19th century and the beginning of the 20th century identify as Russian Americans. More recent émigrés would often refer to this group as the 'starozhili', which translates to mean "old residents". This group became the pillar of the Russian Orthodox Church in America[ citation needed]. Today, most of this group has become assimilated into the local society, with ethnic traditions continuing to survive primarily around the church.

Main articles: Russian America and Russian colonization of the Americas 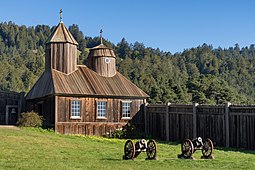 The territory that today is the U.S. state of Alaska was settled by Russians and controlled by the Russian Empire; Russian settlers do not only include ethnic Russians, they also include Russified Ukrainians, Russified Romanians (from Bessarabia), and native Siberians, including Yupik, Mongolic peoples, Chukchi, Koryaks, Itelmens, and Ainu. The southernmost such post of the Russian American Company was Fort Ross, established in 1812 by Ivan Kuskov, some 50 miles north of San Francisco, as an agricultural supply base for Russian America. It was part of the Russian-America Company, and consisted of four outposts, including Bodega Bay, the Russian River, and the Farallon Islands. There was never an established agreement made with the government of New Spain which produced great tension between the two countries. Spain claimed the land yet had never established a colony there. But due to the well armed Russian Fort, Spain could not remove the Russians living there. Without the Russians' hospitality the Spanish colony would have been abandoned due to their supplies being lost when Spanish supply ships sank in a large storm off the South American coast. After the Independence of Mexico, tensions were reduced and trade was established with the new government of Mexican California.

Immigration to the U.S.

The most prominent Russian groups that immigrated in this period were Carpatho-Rusyns from Austria-Hungary who self-identified as Russians and those groups from Imperial Russia seeking freedom from religious persecution. The latter included Russian Jews, escaping the 1881–1882 pogroms by Alexander III, who moved to New York City and other coastal cities; the Spiritual Christians, treated as heretics at home, who settled largely in the Western United States in the cities of Los Angeles, San Francisco, [12] [13] and Portland, Oregon; [14] two large groups of Shtundists who moved to Virginia and the Dakotas, [12] and mostly between 1874 and 1880 German-speaking Anabaptists, Russian Mennonites and Hutterites, who left the Russian Empire and settled mainly in Kansas (Mennonites), the Dakota Territory, and Montana (Hutterites). Finally in 1908–1910, the Old Believers, persecuted as schismatics, arrived and settled in small groups in California, Oregon (particularly the Willamette Valley region), [14] Pennsylvania, and New York. [12] Immigrants of this wave include Irving Berlin, legend of American songwriting and André Tchelistcheff, influential Californian winemaker.

World War I dealt a heavy blow to Russia. Between 1914 and 1918, starvation and poverty increased in all parts of Russian society, and soon many Russians questioned the War's purpose and the government's competency. The war intensified anti-Semitic sentiment. Jews were accused of disloyalty and expelled from areas in and near war zones. Furthermore, much of the fighting between Russia, and Austria and Germany took place in Western Russia in the Jewish Pale of Settlement. World War I uprooted half a million Russian Jews. [15] Because of the upheavals of World War I, immigration dwindled between 1914 and 1917. But after the war, hundreds of thousands of Jews began leaving Europe and Russia again for the U.S., Israel and other countries where they hoped to start a new life. [16]

A large wave of Russians immigrated in the short time period of 1917–1922, in the wake of October Revolution and Russian Civil War. This group is known collectively as the White émigrés. The U.S. was the third largest destination for those immigrants, after France and Serbia.[ citation needed] This wave is often referred to as the first wave, when discussing Soviet era immigration. The head of the Russian Provisional Government, Alexander Kerensky, was one of those immigrants. 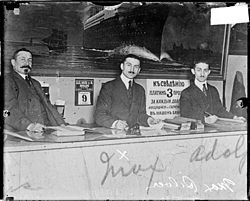 Since the immigrants were of the higher classes of the Russian Empire, they contributed significantly to American science and culture. Inventors Vladimir Zworykin, often referred to as "father of television", Alexander M. Poniatoff, the founder of Ampex, and Alexander Lodygin, arrived with this wave. The U.S. military benefited greatly with the arrival of such inventors as Igor Sikorsky (who invented the Helicopter and Aerosan), Vladimir Yourkevitch, and Alexander Procofieff de Seversky. Sergei Rachmaninoff and Igor Stravinsky are by many considered to be among the greatest composers ever to live in the United States of America. The novelist Vladimir Nabokov, the violinist Jasha Heifetz, and the actor Yul Brynner also left Russia in this period.

As with first and second wave, if the White émigré left Russia to any country, they were still considered first or second wave, even if they ended up moving to another country, including the US at a later time. There was no 'strict' year boundaries, but a guideline to have a better understanding of the time period. Thus 1917-1922 is a guideline. There are Russians who are considered second wave even if they arrived after 1922 up to 1948.

During the Soviet era, emigration was prohibited, and limited to very few defectors and dissidents who immigrated to the United States of America and other Western Bloc countries for political reasons. Some fled the Communist regime, such as Vladimir Horowitz in 1925 or Ayn Rand in 1926, or were deported by it, such as Joseph Brodsky in 1972, or Aleksandr Solzhenitsyn in 1974, some were communists themselves, and left in fear of prosecution, such as NKVD operative Alexander Orlov who escaped the purge in 1938 [17] or Svetlana Alliluyeva, daughter of Joseph Stalin, who left in 1967. Some were diplomats and military personnel who defected to sell their knowledge, such as the pilots Viktor Belenko in 1976 and Aleksandr Zuyev in 1989.

Following the international condemnation of the Soviet reaction to Dymshits–Kuznetsov hijacking affair in 1970, the Soviet Union temporarily loosened emigration restrictions for Jewish emigrants, which allowed nearly 250,000 people leave the country, [18] escaping covert antisemitism. Some went to Israel, especially at the beginning, but most chose the US as their destination, where they received the status of political refugees. This lasted for about a decade, until very early 1980s. Emigrants included the family of Google co-founder Sergey Brin, which moved to the US in 1979, citing the impossibility of an advanced scientific career for a person of Jewish descent.[ citation needed]

The slow Brezhnev stagnation of the 1970s and Mikhail Gorbachev's following political reforms since the mid-1980s prompted an increase of economic immigration to the United States, where artists and athletes defected or legally emigrated to the US to further their careers: ballet stars Mikhail Baryshnikov in 1974 and Alexander Godunov in 1979, composer Maxim Shostakovich in 1981, hockey star Alexander Mogilny in 1989 and the entire Russian Five later, gymnast Vladimir Artemov in 1990, glam metal band Gorky Park in 1987, and many others.

With perestroika, a mass Jewish emigration restarted in 1987. The numbers grew very sharply, leading to the United States forbidding entry to those emigrating from the USSR on Israeli visa, starting October 1, 1989. Israel withheld sending visa invitations from the beginning of 1989 claiming technical difficulties. After that the bulk of Jewish emigration went to Israel, nearing a million people in the following decade. Those who could claim family reunion could apply for the direct US visa, and were still receiving the political refugee status in the early 1990s. 50,716 citizens of ex-USSR were granted political refugee status by the United States in 1990, 38,661 in 1991, 61,298 in 1992, 48,627 in 1993, 43,470 in 1994, 35,716 in 1995 [24] with the trend steadily dropping to as low as 1,394 refugees accepted in 2003. [25] For the first time in history, Russians became a notable part of illegal immigration to the United States.

With the fall of the Soviet Union in 1991 and the subsequent transition to free market economy came hyperinflation and a series of political and economic crises of the 1990s, culminating in the financial crash of 1998. By mid-1993 between 39% and 49% of Russians were living in poverty, a sharp increase compared to 1.5% of the late Soviet era. [26] This instability and bleak outcome prompted a large new wave of both political and economic emigration from Russia, and one of the major targets became the United States, which was experiencing an unprecedented stock market boom in 1995–2001.

A notable part of the 1991—2001 immigration wave consisted of scientists and engineers who, faced with extremely poor job market at home [27] coupled with the government unwilling to index fixed salaries according to inflation or even to make salary payments on time, left to pursue their careers abroad. This coincided with the surge of hi-tech industry in the United States, creating a strong brain drain effect. According to the National Science Foundation, there were 20,000 Russian scientists working in the United States in 2003, [28] and the Russian software engineers were responsible for 30% of Microsoft products in 2002. [27] Skilled professionals often command a significantly higher wage in the US than in Russia. [29] The number of Russian migrants with university educations is higher than that of US natives and other foreign born groups. [30]

51% of lawful Russian migrants obtain permanent residence from immediate family member of US citizens, 20% obtain it from the Diversity Lottery, 18% obtain it through employment, 6% are family sponsored, and 5% are refugee and asylum seekers. [31]

The Soviet Union was a sports empire, and many prominent Russian sportspeople found great acclaim and rewards for their skills in the United States. Examples are Alexander Ovechkin, Alexandre Volchkov, and Andrei Kirilenko. Nastia Liukin was born in Moscow, but came to America with her parents as a young child, and developed as a champion gymnast in the U.S. Maria Sharapova moved to the United States at the age of seven.

As of now, Russians make up the nineteenth highest migrant group overall and the eleventh highest from Europe. [32]

Distribution of Russian Americans according to the 2000 census, red indicates higher concentrations 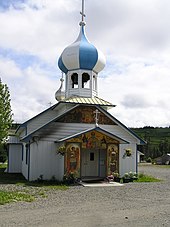