Route 128 station (also Westwood – Route 128 [1], and sometimes subtitled Dedham-Westwood or University Park) is a passenger rail station in Westwood, Massachusetts. It is located at the crossing of the Northeast Corridor and Interstate 95/ US Route 1/ Route 128 at the eastern tip of Westwood and Dedham. It is served by most MBTA Commuter Rail Providence/Stoughton Line commuter trains, as well as by all Amtrak Northeast Regional and Acela Express intercity trains. The station area and platforms are owned by Amtrak, but the MBTA owns the parking garage and tracks. [1]

Route 128 station opened in 1953 as a park-and-ride facility and was rebuilt in 2000 with a large parking garage. The station has no bus connections and low walkability to Westwood, Dedham, or the nearby towns of Norwood and Canton, however substantial development has occurred just south of the station. It is one of only a few MBTA stations that permits overnight parking. [5] A separate entrance to the garage is used for overnight parking, which is intended for Amtrak customers. Unlike most MBTA stations, credit cards and even E-ZPass transponders are accepted for payment of parking fees.

The station has full-length high-level platforms serving both tracks and is fully accessible.

A station named Green Lodge was located on Green Lodge Street (later part of the original Circumferential Highway) from the 1860s to the 1920s. The New Haven Railroad opened Route 128 station on April 26, 1953, on the same site, so that intercity rail passengers could park off the (then under construction) Route 128 expressway rather than having to drive into downtown Boston. [2] Built at the direction of New Haven president Frederic C. Dumaine, Jr., Route 128 station was among the first dedicated park and ride stations built in the country. [1] It quickly became a preferred station for suburban commuters, who now represent a majority of station traffic. [6] The bridge that carried Green Lodge Street over the tracks was removed in the 1980s; the abutments still flank the platforms. Some local commuters park on the east side of the station to avoid parking fees, though the MBTA has attempted to curtail this. [7]

A southbound Amtrak train at Route 128 in 1974. The 1965-built station building and 1971-added pedestrian bridge (moved from Wickford Junction) are visible.

The station originally had two small prefab shelters, manufactured as garages, as waiting rooms. [1] These were replaced in 1965 with brick buildings; a pedestrian overpass originally from Wickford Junction was added in 1971. [1] [8] [9] The New Haven Railroad folded into Penn Central at the end of 1968; Amtrak took over intercity service on May 1, 1971, while the MBTA (formed in 1964 to subsidize suburban commuter service) gradually took over local trains. [10]

The MBTA bought Penn Central's southside lines and stations on January 27, 1973, and began subsidizing service as far as Canton Junction on the Stoughton Branch and Sharon on the Providence Line in June 1973. [10] Conrail took over Penn Central on April 1, 1976; beginning on March 12, 1977, the MBTA contracted the Boston and Maine Railroad to run all southside service. [10] Both Amtrak and the B&M continued to use the 1965-built station facilities for the remainder of the 20th century. 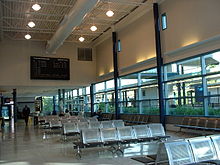 Conceptual designs for a replacement station were completed in June 1991. [11] In November 1997, the MBTA Board approved a $42.5 million plan to replace the aging station. [12] The new station opened in 2000, with a $30 million, multi-level 2,000-space parking garage; bicycle racks; staffed ticket windows; a small concession and vending area; and an enclosed, well-lit waiting area. [13] [14] The new station included new full-length high-level side platforms, which are designed to be converted to island platforms when third and fourth tracks are eventually added to the station. The new platforms and the elevators connecting them were necessary to meet ADA rules for handicapped accessibility, as well as to allow the Acela Express (which can only board at high-level platforms) to begin running in December 2000. [1] The new parking garage at the station was a source of controversy due to the financing plan that relies heavily on customer revenues, which initially failed to meet expectations. [13] The financing plan causes parking fees to be higher than other MBTA Commuter Rail stations. [15]

The elevators and escalators installed in 2000, which are necessary for many passengers to reach the Boston-bound platform, have proved unreliable. In early 2013, the escalator serving the outbound platform failed and was not repaired due to lack of funding for replacement. [16] The inbound platform escalator and one elevator failed in early 2015, prompting Amtrak to initiate replacement of both escalators and both elevators. The replacement process was originally expected to require both elevators to be out of service until the project is complete in early 2016. [17] The elevators were taken out of service on July 20, 2015; Amtrak provided an accessible shuttle service between both platforms and the station building. [18] The elevators returned to service on September 1, 2015, though the escalators remained out of service for several months longer. [19] However, elevators and escalators inside the station building suffered similar issues for the next several years. Because Amtrak is except from state and local building laws, it circumvented normal rules that require regular elevator inspections. [20]

As a major park-and-ride ten miles from downtown Boston, Route 128 station is a candidate for rapid transit service rather than conventional low-frequency commuter rail service. The 1966 Program for Mass Transportation recommended a bifurcated Orange Line, with one branch to West Roxbury or Hersey and another to either Readville or Route 128 via Hyde Park. [21] Various reports over the next two decades continued to recommend various combinations of the extensions; however, due to cost, the 1987 relocation of the Orange Line to the Southwest Corridor was terminated at Forest Hills. [22] Hyde Park, Readville, and the Needham Line instead received limited upgrades like handicapped accessible platforms.

The extension is still periodically discussed. The 2004 Program for Mass Transportation listed an extension to Route 128 with intermediate stops at Mount Hope, Hyde Park, and Readville at a cost of $342.8 million. The extension was listed as low priority due to environmental issues with crossing the wetlands south of Readville, and because the corridor already has commuter rail service. [23]