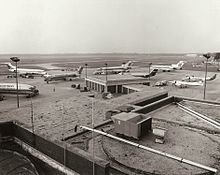 The Capital Region Airport Commission (CRAC) owns and operates Richmond International Airport. Established in 1975 by the Virginia General Assembly, [3] the commission is overseen by representatives of the counties of Chesterfield, Hanover, and Henrico, and the City of Richmond. RIC serves the Greater Richmond Region with non-stop flights to 26 destinations, serviced by seven air carriers. A joint-civil-military public airport, RIC houses the former property of the Richmond International Airport Air National Guard Station, which was transferred to the Department of the Army in support of U.S. Army Reserves and Virginia Army National Guard Activities. [4]

In the early 2000s Richmond saw another period of extensive growth, and in 2005 it announced a complete redesign. RIC went from a single story terminal with 12 gates to 22 gates (plus numerous non-jet bridge gates), added parking spaces (to 10,500), and created a new terminal roadway and air traffic control tower. The project features major renovations of the terminal building, including upper-level departures and lower-level arrivals, the construction of a central utility plant, and the widening of security checkpoints. Construction on the two-level terminal was completed in spring 2007, and was designed by Gresham, Smith & Partners. [5] Due to recent growth Richmond has reopened its international gate (B15) for flights to Cancun, Toronto, Punta Cana, all of which are seasonal services.

In 2016 Richmond recorded its second highest yearly passenger volume, and RIC plans a major expansion, starting in the Fall of 2018. The number of gates will increase from 22 to 28 or 30 by adding 6 or 8 gates (net) to its A Concourse. [6] Construction will begin in late Summer/early Fall 2018 and last for 15 months. As of January 2020, the construction work is said to be done by summer 2020. The airport is also planning an expansion of the checkpoint area in Concourse B, which currently has four TSA screening lanes. That project will increase the number of lanes available to at least six. That expansion is estimated to cost $4 million and will be underway in the late Summer or Fall of 2018, with construction set to last for about eight months. Concourse A has three screening lanes in its checkpoint area, though that is likely to be expanded in the next few years. More construction at the airport is coming - the Capital Region Airport Commission is looking into moving the rental car counters from the central portion of the lower lobby level to an expanded north baggage claim area. The airport also expects to add an enclosed two-level connecting walkway between the terminal and the rental car garage. [7] The rental car garage is also set to expand. In 2017, the airport handled 3,657,479 passengers, an all-time record. [8]

In 2016 Richmond International Airport handled over 63,000 tons of cargo, an all-time high. Cargo services include more than 100,000 square feet (10,000 m2) of warehouse/office space and 1,000,000 square feet (100,000 m2) of apron space. The airport is designated a Foreign Trade Zone. Because of its position on the Eastern Seaboard, cargo transit via RIC is on the rise. Goods shipped out of the metropolitan Richmond area can reach 72% of the U.S. population within 24 hours.

In 2016 RIC reported its 32nd consecutive month of growth, with an estimated 345,000 travelers reported in October 2016. Several airlines serving RIC have responded to growing demand with upgraded routes and aircraft. Delta Air Lines, JetBlue Airways and Southwest Airlines have added additional routes and larger aircraft in 2017. United Airlines up-gauged its Denver service to a mainline aircraft, replacing the Embraer E-175 used with United Express. It is the longest and most westerly flight from Richmond, surpassing American Airlines' Dallas/Fort Worth service.

In 2017 the airport served 3,657,479 passengers, an all-time record for the airport and broke its previous record of 3,634,544 in 2007. RIC is served by airlines flying primarily domestic routes to cities in the South, Northeast, and Midwest, and connecting flights to major hubs for international destinations.

The airport was dedicated as Richard Evelyn Byrd Flying Field in 1927 in honor of aviator Richard E. Byrd, brother of then Gov. Harry F. Byrd. Charles Lindbergh attended the dedication ceremony. Although the facility was in Henrico County, Richmond Mayor John Fulmer Bright was instrumental in the creation of Byrd Field, which was initially owned by the City of Richmond. It was renamed Richard E. Byrd Airport in 1950, and became Richmond International Airport in 1984. The airport's manager from 1957 to 1988 was Anthony E. Dowd, Sr. [10]

A terminal building designed by Marcellus Wright and Son was completed in 1950. [11] It was expanded from 1968 to 1970, which included the current passenger concourses. [12]

In 2017, the airport served 3,657,479 passengers, an all-time record for the airport and broke its previous record of 3,634,544 in 2007. 2017 was also the airport's fifth consecutive year of growth and experienced a passenger traffic increase of 2.8% over passenger traffic reported in 2016. [27] RIC is the third-busiest airport in Virginia, after Washington Dulles and Ronald Reagan Washington.

Until October 2007, the 192d Fighter Wing (192 FW), an Air Combat Command (ACC)-gained unit of the Virginia Air National Guard, maintained an Air National Guard station, operating F-16 Fighting Falcon aircraft from the airport. In late 2007, pursuant to BRAC 2005 action, the 192 FW relinquished its F-16C and F-16D aircraft and moved to Langley AFB (now Joint Base Langley-Eustis), to integrate with the Regular Air Force as an associate unit to the 1st Fighter Wing (1 FW) flying the F-22 Raptor.