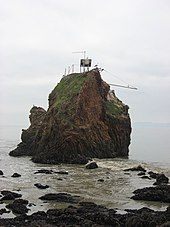 Selim E. Woodworth was the first owner and resident of Red Rock Island, where he built a cabin and maintained a hunting preserve. [6] [7] [8] The island was once mined for manganese. It was privately purchased in the 1920s. After a series of owners, David Glickman, at the time a San Francisco attorney and part-time real estate buyer, purchased the island in 1964 for US$49,500. [3]

In the 1980s, a plan was proposed (but never implemented) to remove the top half of the island (which would be sold for highway roadbed construction). The island would then be developed with a 10-story hotel and casino, and a yacht harbor on the lee (north) side. Water and power would be provided from lines connected to the San Rafael Bridge. [9]

In June 2007, Glickman, now a gem dealer in Thailand, announced that Red Rock Island was for sale for US$10 million. He had previously attempted to sell the island in 2001, including to the California Department of Fish and Game. [10] No conservation groups or agencies have so far expressed interest in buying the island, though some have considered it. [3]

The island is mentioned and described as "Blue Island" in the novel The Circle by Dave Eggers. [13]