From Wikipedia, the free encyclopedia
(Redirected from Red Line (Los Angeles Metro))
This article is about the currently operating subway. For the former Los Angeles rail system known as the "Red Car", see Pacific Electric.
Metro line from Los Angeles to North Hollywood

The B Line (formerly the Red Line) is a heavy rail subway line operating in Los Angeles, running between Downtown Los Angeles and North Hollywood. It is one of six lines on the Metro Rail system, operated by the Los Angeles County Metropolitan Transportation Authority.

The Metro B Line is one of the city's two fully-underground subway lines (along with the D Line). Although they separate in Koreatown, the two subway lines (B and D) share tracks through Downtown Los Angeles. As of 2019 [update], the combined B and D lines averaged 133,413 boardings per weekday. [1]

The B Line was originally branded as the Hollywood branch of the Red Line (with the other branch being today's D Line). In 2006, the Purple Line was instituted as its own line, separate from the Red Line. In 2020, the Red Line was renamed to the B Line while retaining the color red in its circle icon. 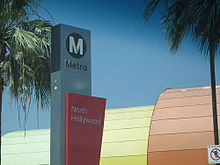 North Hollywood is the northern terminus of the B Line in the San Fernando Valley.

The B Line is a 16.4-mile (26.4 km) line [2] that begins at Union Station and travels southwest through Downtown Los Angeles, passing the Civic Center, Pershing Square (near the Historic Core) and the Financial District. At 7th St/Metro Center, travelers can connect to the Metro A Line and Metro E Line. From here, the train travels between 7th Street and Wilshire Boulevard (and briefly Ingraham Street) west through Pico-Union and Westlake, arriving at Wilshire/Vermont in the city's Koreatown district. Up to this point, the track is shared with the Metro D Line: at Wilshire/Vermont, the two lines diverge.

From here, the B Line travels north along Vermont, and then west along Hollywood Boulevard, traveling through Koreatown and Hollywood. Finally, the line turns northwest and crosses into the San Fernando Valley, where it terminates in North Hollywood.

This route roughly follows a branch of the old Red Car system through the Cahuenga Pass, dismantled during The Great American Streetcar Scandal.

Trains on the B Line operate every ten minutes during peak hours Monday through Friday. [4] They operate every twelve minutes during the daytime weekdays and all day on the weekends after approximately 10 a.m. (with a 15-minute headway early Saturday and Sunday mornings). Night service is every 20 minutes.

The current B Line is the product of a long-term plan to connect Downtown Los Angeles to central and western portions of the city with a heavy rail subway system. Originally planned in the 1980s to travel west down Wilshire Boulevard to Fairfax Avenue and then north to the San Fernando Valley, a methane explosion at a Ross Dress for Less clothing store near Fairfax in 1985, just as construction got underway, led to a legal prohibition on tunneling in a large part of Mid-Wilshire, though this prohibition was later rescinded in the early 2000s allowing for the expansion of the D Line. [5] Instead, after some political wrangling, a new route was chosen up Vermont Avenue to Hollywood Boulevard.

The tunnel to connect the Metro Red Line Hollywood leg to the San Fernando Valley extension cost $136 million ($202 million adjusted for inflation). It included the cost of digging a tunnel under the Santa Monica Mountains. The tunneling work was done by a Traylor Brothers/Frontier-Kemper joint venture. The Santa Monica Mountains Conservancy and the Sierra Club had fought to prevent the tunneling but ultimately lost. Environmentalists were concerned that the removal of billions of gallons of ground water might affect springs, wildlife and vegetation.

Tunneling from North Hollywood for the subway started in 1995. Workers dug 70 feet (21 m) deep using tunneling machines. Work progressed an average of 50 to 200 feet (15 to 61 m) daily, performed by work crews round-the-clock six days a week. The machines bored through soil that once lined the bottoms of ancient oceans.

The two tunnels between the North Hollywood and Universal City stations were a total of 10,541 feet (3,213 m). The cost of building the two tunnels was $65.4 million ($97.1 million adjusted for inflation) and involved 250 workers. 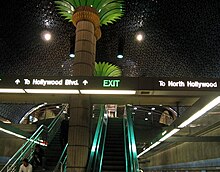 The route currently known as the B Line was originally intended to continue beyond its eastern terminus at Union Station to East Los Angeles. At the north end of the route, the B Line was to turn west from North Hollywood station toward Warner Center. Trouble during the B Line's construction, including a 1995 sinkhole that led to the project switching to a new contractor, [9] led to a 1998 ballot proposition that banned revenue from existing sales taxes being used to dig subway tunnels in Los Angeles County, [10] [11] which put an end to expansion of the B Line for the then foreseeable future. The route to Warner Center was turned into the G Line, a bus rapid transitway (BRT) service.

In the early 21st century, new sales tax Measures R and M were approved by voters to specifically provide funds for rail development. While the B Line does not figure into currently active expansion plans, several concepts have been proposed that would build off of it.

Extensions to the North

Former Mayor Antonio Villaraigosa has mentioned extending the B Line from its current North Hollywood Station terminus along Lankershim Boulevard to the northeastern San Fernando Valley, with a terminus in Sylmar.[ citation needed]

One long-term possibility might be an underground extension of another mile or two to a future high-rise housing district, or to a multi-modal transportation hub station at Bob Hope Airport in Burbank, a distance of approximately four miles. It would possibly go under Oxnard Street, the NoHo West development, Laurel Canyon Blvd, and Vanowen Street to the Burbank Airport.[ citation needed] In 2006 a large number of housing units, including a high-rise tower was completed very near the North Hollywood ( NoHo Arts District) station.

Planned high-rise housing developments further to the north, including the NoHo West development which broke ground in March 2017 and the possibility of establishing a direct connection to the planned California High-Speed Rail station at Burbank Airport have been suggested as additional justification for an extension of the line from its current terminus in North Hollywood. [12]

In 2010, at the request of L.A. City Councilman Tom LaBonge, Metro staff studied the possibility of adding a station along the west bank of the Los Angeles River to 6th Street and Santa Fe Avenue. The study concluded that such an extension, completed at-grade along Metro-owned right-of-way, could be completed for as little as $90 million.

The study suggested an alternative station at the Division 20 Yard north of 4th Street and Santa Fe Avenue. This station would be closer to the residential population of the Arts District. As new turnback tracks will need to be built as part of the Purple Line Extension (to allow shorter headways), this Arts District extension could possibly be partially completed as part of the Purple Line Extension project, lowering the incremental cost of the station while increasing its usability. [13] [14]

Plans of extending the B Line to the Eastside have been set aside with the opening of the Metro Gold Line East extension to the neighborhoods of Boyle Heights and East Los Angeles in 2009. [15] Although there are no plans to do such, it is conceivable that plans for a future eastward extension could involve the San Gabriel Valley rather than the Eastside. Some citizen proposals have included the conversion of the El Monte Busway to heavy rail, although this would disrupt the existing bus and Metrolink service along that corridor. Other rights-of-way that could host a B Line extension, whether subway or at-grade, include the Union Pacific's Alhambra Trench, the former Pacific Electric two-track right of way extending through the City Terrace area to El Monte and Covina, and the median of Huntington Drive, which also held a two-track Pacific Electric line extending as far as Azusa & Glendora, until 1951, when it was removed.

Metro is currently constructing the Purple Line Extension to extend the D Line (originally part of the B Line) seven miles to the Westside, with 9 new stations. This extension to the D Line will open in phases, completing in 2027. [16]

The following table lists the stations of the B Line, from South to North :

Inside the car of a Metro B Line. Both the Metro B and D Lines use the Ansaldobreda A650 cars.

The B Line operates out of the Division 20 Yard (Santa Fe Yard) located at 320 South Santa Fe Avenue in Downtown Los Angeles. This yard stores the fleet used on the Red and Purple Lines, and where heavy maintenance is performed. Cars reach this yard by continuing past Union Station, making a right turn and surfacing at the Eastern terminus of Ducommun Street. They then travel south to 1st Street, through a washing station, and enter the yard.

The B Line uses Breda A650 75-foot (23 m) electric multiple unit cars built by Breda in Italy; these trains are based on similar vehicles that were built by the Budd Company for the Baltimore and Miami rapid transit systems between 1983 and 1986. Trains usually run in six-car consists during peak hours and four-car consists outside of peak hours. The acceleration for cars #530 and up is similar to that of cars used by the Washington Metro because they both use General Electric traction motors. [19] [20] The cars are maintained in a Metro yard on Santa Fe Avenue near 4th Street alongside the Los Angeles River in downtown Los Angeles.

On December 22, 2006, a rider accidentally spilled a vial of mercury on the platform at the Pershing Square station. He then located a passenger information intercom and told the operator that he spilled mercury before boarding a train. [22] The Los Angeles County Sheriff's Department was not notified until the next day, eight hours later. Metro has responded since the incident by giving hazardous materials (Hazmat) training to its field employees and operators so they can identify hazardous substances and take correct action in the future. [23]

On August 19, 2011, an altercation between two passengers resulted in a fatal stabbing of one of the involved on the train near the Hollywood and Vine station. [24] The suspect was caught on August 24. [25]

On September 4, 2012, a 54-year-old man fell onto the tracks at the North Hollywood station and was hit by an oncoming train. [26] He was rescued by firefighters and paramedics but died at the hospital. [27]

On May 22, 2018, an unidentified man "probably jumped" onto the tracks at the 7th Street/Metro Center station and was hit by an oncoming train. He was rescued by firefighters and paramedics in grave condition and later died at the hospital. It is unknown if it was suicide or not. [28]