From Wikipedia, the free encyclopedia
Genus of flowering plants in the buttercup family Ranunculaceae
"Buttercup" redirects here. For the variety of squash, see Buttercup squash. For other uses, see Buttercup (disambiguation).

Ranunculus /ræˈnʌŋkjʊləs/ [1] is a large genus of about 600 species [2]:276 [3] of flowering plants in the family Ranunculaceae. Members of the genus are known as buttercups, spearworts and water crowfoots.

Buttercups usually flower in the spring, but flowers may be found throughout the summer, especially where the plants are growing as opportunistic colonizers, as in the case of garden weeds.

The water crowfoots (Ranunculus subgenus Batrachium), which grow in still or running water, are sometimes treated in a separate genus Batrachium (from Greek βάτραχος bátrakhos, "frog"). They have two different leaf types, thread-like leaves underwater and broader floating leaves. In some species, such as R. aquatilis, a third, intermediate leaf type occurs.

Ranunculus species are used as food by the larvae of some Lepidoptera species including the Hebrew character and small angle shades. Some species are popular ornamental flowers in horticulture, with many cultivars selected for large and brightly coloured flowers. 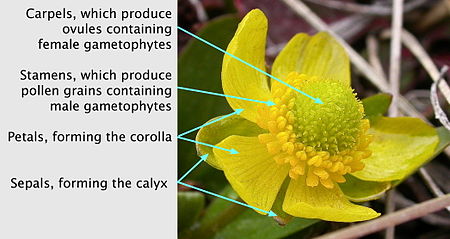 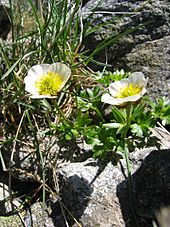 Buttercups are mostly perennial, but occasionally annual or biennial, herbaceous, aquatic or terrestrial plants, often with leaves in a rosette at the base of the stem. In many perennial species runners are sent out that will develop new plants with roots and rosettes at the distanced nodes. The leaves lack stipules, have petioles, are palmately veined, entire, more or less deeply incised, or compound, and leaflets or leaf segments may be very fine and linear in aquatic species. The hermaphrodite flowers are single or in a cyme, have usually five (but occasionally as few as three or as many as seven) mostly green sepals and usually five yellow, greenish or white petals that are sometimes flushed with red, purple or pink (but the petals may be absent or have a different, sometimes much higher number). At the base of each petal is usually one nectary gland that is naked or may be covered by a scale. Anthers may be few, but often many are arranged in a spiral, are yellow or sometimes white, and with yellow pollen. The sometimes few but mostly many green or yellow carpels are not fused and are also arranged in a spiral, mostly on a globe or dome-shaped receptacle. The fruits (in this case called achenes) may be smooth or hairy, winged, nobby or have hooked spines. [4]

The petals of buttercups are often highly lustrous, especially in yellow species, owing to a special coloration mechanism: the petal's upper surface is very smooth causing a mirror-like reflection. [5] [6] The flash aids in attracting pollinating insects and temperature regulation of the flower's reproductive organs. [5]

The name Ranunculus is Late Latin for "little frog", the diminutive of rana. This probably refers to many species being found near water, like frogs. [4]

The name buttercup may derive from a false belief that the plants give butter its characteristic yellow hue (in fact it is poisonous to cows and other livestock). A popular children's game involves holding a buttercup up to the chin; a yellow reflection is supposed to indicate fondness for butter. [7]

In the interior of the Pacific Northwest of the United States, the buttercup[ clarification needed] is called "Coyote's eyes"—ʔiceyéeyenm sílu in Nez Perce and spilyaynmí áčaš in Sahaptin. In the legend, Coyote was tossing his eyes up in the air and catching them again when Eagle snatched them. Unable to see, Coyote made eyes from the buttercup.[ citation needed]

Splitting of the genus

Molecular investigation of the genus has revealed that Ranunculus is not monophyletic with respect to a number of other recognized genera in the family—e.g. Ceratocephala, Halerpestes, Hamadryas, Laccopetalum, Myosurus, Oxygraphis, Paroxygraphis and Trautvetteria. A proposal to split Ranunculus into several genera has thus been published in a new classification for the tribe Ranunculeae. [8] The split (and often re-recognized) genera include Arcteranthis Greene, Beckwithia Jeps., Callianthemoides Tamura, Coptidium (Prantl) Beurl. ex Rydb., Cyrtorhyncha Nutt. ex Torr. & A.Gray, Ficaria Guett., Krapfia DC., Kumlienia E. Greene and Peltocalathos Tamura. Not all taxonomists and users accept this splitting of the genus, and it can alternatively be treated in the broad sense.

All Ranunculus (buttercup) species are poisonous when eaten fresh, but their acrid taste and the blistering of the mouth caused by their poison means they are usually left uneaten. Poisoning in livestock can occur where buttercups are abundant in overgrazed fields where little other edible plant growth is left, and the animals eat them out of desperation. Symptoms of poisoning include bloody diarrhea, excessive salivation, colic, and severe blistering of the mouth, mucous membranes and gastrointestinal tract. When Ranunculus plants are handled, naturally occurring ranunculin is broken down to form protoanemonin, which is known to cause contact dermatitis in humans and care should therefore be exercised in extensive handling of the plants. [10] The toxins are degraded by drying, so hay containing dried buttercups is safe.[ citation needed]

†Ranunculus gailensis and †Ranunculus tanaiticus seed fossils have been described from the Pliocene Borsoni Formation in the Rhön Mountains, central Germany. [11]