From Wikipedia, the free encyclopedia
International treaty for the conservation and sustainable utilization of wetlands

Every three years, representatives of the contracting parties meet as the Conference of the Contracting Parties (COP), the policy-making organ of the convention which adopts decisions (resolutions and recommendations) to administer the work of the convention and improve the way in which the parties are able to implement its objectives. [3] COP12 was held in Punta del Este, Uruguay, in 2015. COP13 was held in Dubai, United Arab Emirates, in October 2018. 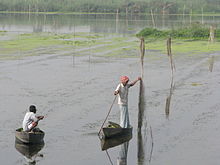 Sustainable fishing in India, an example of wise use

The list of wetlands of international importance included 2,331 Ramsar sites in May 2018 covering over 2.1 million square kilometres (810,000 sq mi). The countries with most sites are the United Kingdom with 175 and Mexico with 142. And, the country with the greatest area of listed wetlands is Bolivia, with around 148,000 square kilometres (57,000 sq mi). [4]

The Ramsar Sites Information Service (RSIS) is a searchable database which provides information on each Ramsar site. [5] 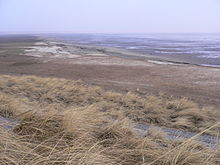 The Wadden Sea is a transboundary Ramsar site covering 13 Ramsar sites in Denmark, Germany and the Netherlands
Main article: List of parties to the Ramsar Convention

As of 2016 there are 18 transboundary Ramsar sites, and 15 Ramsar regional initiatives covering regions of the Mediterranean, Asia, Africa, and South America.

The Ramsar Convention works closely with six other organisations known as international organization partners (IOPs). These are:

These organizations support the work of the convention by providing expert technical advice, helping implement field studies, and providing financial support. The IOPs also participate regularly as observers in all meetings of the conference of the parties and as full members of the Scientific and Technical Review Panel.

The convention collaborates with a network of partners:

Bodies established by the convention

Conference of the Contracting Parties

This is the convention's governing body consisting of all governments that have ratified the treaty. This ultimate authority reviews progress under the convention, identifies new priorities, and sets work plans for members. The COP can also make amendments to the convention, create expert advisory bodies, review progress reports by member nations, and collaborate with other international organizations and agreements.

The Standing Committee is the intersessional executive body which represents the COP between its triennial meetings, within the framework of the decisions made by the COP. The contracting parties that are members of the Standing Committee are elected by each meeting of the COP to serve for the three years. 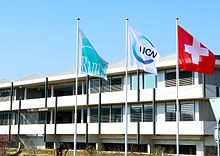 The Scientific and Technical Review Panel

The Scientific and Technical Review Panel (STRP) provides scientific and technical guidance to the Conference of Contracting Parties, the Standing Committee, and the Ramsar Secretariat.

The Secretariat carries out the day-to-day coordination of the convention's activities. It is based at the headquarters of the International Union for Conservation of Nature (IUCN) in Gland, Switzerland.

The implementation of the Ramsar Convention is a continuing partnership between the Conference of Contracting Parties, the Standing Committee, and the Secretariat, with the advice of the subsidiary expert body, the Scientific and Technical Review Panel (STRP), and the support of the international organization partners (IOPs).

Martha Rojas Urrego is the sixth secretary general of the Ramsar Convention on Wetlands.

The convention was co-founded by Eskandar Firouz (former environment minister of Iran), Luc Hoffmann of Tour du Valat research station in the Camargue in France, and Geoffrey Matthews of the Wildfowl & Wetlands Trust at Slimbridge in the late 1960s. The conference which adopted the terms of the agreement was held in the Iranian Caspian Sea resort of Ramsar on 2 February 1971. [6]