Raiatea ( Tahitian: Ra'iātea) is the second largest of the Society Islands, after Tahiti, in French Polynesia. The island is widely regarded as the "centre" of the eastern islands in ancient Polynesia[ citation needed] and it is likely that the organised migrations to the Hawaiian Islands, New Zealand and other parts of East Polynesia started at Raiatea.

A traditional name for the island is Havai'i, homeland of the Māori people. [3] Situated on the southeast coast is the historical Taputapuatea marae, which was established by 1000 AD.

The main township on Raiatea is Uturoa, the administrative centre for the Leeward Islands ( French Îles Sous-le-vent). There are also colleges which serve as the main educational location for secondary schools for students from the regional islands of Bora Bora, Tahaa, Huahine and Maupiti. 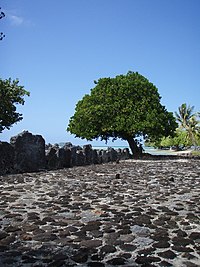 Taputapuatea marae, an ancient marae mentioned in the traditions of Polynesian peoples, including, for example, the Māori of Aotearoa, who regard this place as a sacred marae of their ancestors. This is where the Hawaiian voyaging canoe Hōkūle'a landed on her first voyage in 1976.

The Tahitian language name Ra'iātea means bright sky. "Ulitea" is an obsolete transcription commonly used in the 19th century. The term recurs elsewhere in Polynesia as a local place name - on Rarotonga (Rangiatea), in New Zealand (Rangiātea), and on the Hawaiian islands of Hawai'i and O'ahu (Laniākea).[ citation needed]

The extinct Raiatea starling inhabited the island; there is only one drawing of it in the world - in the Natural History Museum, London.

Raiatea has a small road that runs around the entire island. Raiatea Airport is an airport in Uturoa.

The island is divided into three administration communes (municipalities):

These three communes are inside the administrative subdivision of the Leeward Islands.

The island economy is mainly agricultural with exports of vanilla, pineapple and coconut. The plant Nono (or noni) (Morinda citrifolia) is also grown. Fa'aroa Valley is a large and important agricultural region with the rural economy and the cultivation of vanilla supported by a local research facility. Pearl farming is also an important industry while farming cattle, sheep and pigs has recently decreased. There is less tourism compared to the other islands in the archipelago. The local tourist infrastructure comprises boarding houses, two marinas, a four star hotel, The Hawaiki Nui and a port for visiting cruise ships. There is also a fledgling local industry in the maintenance of yachts and shipbuilding. The main source of employment is the island's public service and the consumer market.