From Wikipedia, the free encyclopedia
(Redirected from Public equity)
This article is about publicly traded companies. For enterprises owned by the state or a state entity, see State-owned enterprise.
Company that offers its securities for sale to the general public 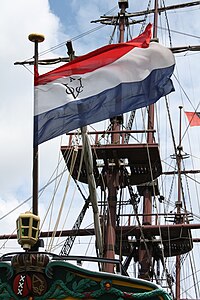 Public companies are formed within the legal systems of particular states, and therefore have associations and formal designations which are distinct and separate in the polity in which they reside. In the United States, for example, a public company is usually a type of corporation (though a corporation need not be a public company), in the United Kingdom it is usually a public limited company (plc), in France a " société anonyme" (SA), and in Germany an Aktiengesellschaft (AG). While the general idea of a public company may be similar, differences are meaningful, and are at the core of international law disputes with regard to industry and trade.

Courtyard of the Amsterdam Stock Exchange (or Beurs van Hendrick de Keyser in Dutch), the world's first formal stock exchange. [2] [3] [4] [5] Modern-day publicly listed multinational corporations (including Forbes Global 2000 companies), in many respect, are all 'descendants' of a business model pioneered by the Dutch East India Company (VOC) in the 17th century. [6]

In the early modern period, the Dutch developed several financial instruments and helped lay the foundations of the modern financial system. [11] [12] The Dutch East India Company (VOC) became the first company in history to issue bonds and shares of stock to the general public. In other words, the VOC was officially the first publicly traded company, [13] because it was the first company ever to be actually listed on an official stock exchange. While the Italian city-states produced the first transferable government bonds, they did not develop the other ingredients necessary to produce a fully fledged capital market: corporate shareholders. As Edward Stringham (2015) notes, "companies with transferable shares date back to classical Rome, but these were usually not enduring endeavors and no considerable secondary market existed (Neal, 1997, p. 61)." [14]

Securities of a company

Usually, the securities of a publicly traded company are owned by many investors while the shares of a privately held company are owned by relatively few shareholders. A company with many shareholders is not necessarily a publicly traded company. In the United States, in some instances, companies with over 500 shareholders may be required to report under the Securities Exchange Act of 1934; companies that report under the 1934 Act are generally deemed public companies.

Many stock exchanges require that publicly traded companies have their accounts regularly audited by outside auditors, and then publish the accounts to their shareholders. Besides the cost, this may make useful information available to competitors. Various other annual and quarterly reports are also required by law. In the United States, the Sarbanes–Oxley Act imposes additional requirements. The requirement for audited books is not imposed by the exchange known as OTC Pink. [17] [18] The shares may be maliciously held by outside shareholders and the original founders or owners may lose benefits and control. The principal-agent problem, or the agency problem is a key weakness of public companies. The separation of a company's ownership and control is especially prevalent in such countries as the UK and the US.[ citation needed]

In the United States, the Securities and Exchange Commission requires that firms whose stock is traded publicly report their major shareholders each year. [19] The reports identify all institutional shareholders (primarily, firms owning stock in other companies), all company officials who own shares in their firm, and any individual or institution owning more than 5% of the firm's stock. [19]

For many years, newly created companies were privately held but held initial public offering to become publicly traded company or to be acquired by another company if they became larger and more profitable or had promising prospects. More infrequently, some companies — such as investment banking firm Goldman Sachs and logistics services provider United Parcel Service (UPS) — chose to remain privately held for a long period of time after maturity into a profitable company.

However, from 1997 to 2012, the number of corporations publicly traded on American stock exchanges dropped 45%. [20] According to one observer ( Gerald F. Davis), "public corporations have become less concentrated, less integrated, less interconnected at the top, shorter lived, less remunerative for average investors, and less prevalent since the turn of the 21st century". [21] Davis argues that technological changes such as the decline in price and increasing power, quality and flexibility of computer Numerical control machines and newer digitally enabled tools such as 3D printing will lead to smaller and more local organization of production. [21]

A group of private investors or another company that is privately held can buy out the shareholders of a public company, taking the company private. This is typically done through a leveraged buyout and occurs when the buyers believe the securities have been undervalued by investors. In some cases, public companies that are in severe financial distress may also approach a private company or companies to take over ownership and management of the company. One way of doing this would be to make a rights issue designed to enable the new investor to acquire a supermajority. With a super-majority, the company could then be relisted, i.e. privatized.

Most industrialized jurisdictions have enacted laws and regulations that detail the steps that prospective owners (public or private) must undertake if they wish to take over a publicly traded corporation. This often entails the would-be buyer(s) making a formal offer for each share of the company to shareholders.

The shares of a publicly traded company are often traded on a stock exchange. The value or "size" of a company is called its market capitalization, a term which is often shortened to "market cap". This is calculated as the number of shares outstanding (as opposed to authorized but not necessarily issued) times the price per share. For example, a company with two million shares outstanding and a price per share of US$40 has a market capitalization of US$80 million. However, a company's market capitalization should not be confused with the fair market value of the company as a whole since the price per share are influenced by other factors such as the volume of shares traded. Low trading volume can cause artificially low prices for securities, due to investors being apprehensive of investing in a company they perceive as possibly lacking liquidity.

For example, if all shareholders were to simultaneously try to sell their shares in the open market, this would immediately create downward pressure on the price for which the share is traded unless there were an equal number of buyers willing to purchase the security at the price the sellers demand. So, sellers would have to either reduce their price or choose not to sell. Thus, the number of trades in a given period of time, commonly referred to as the "volume" is important when determining how well a company's market capitalization reflects true fair market value of the company as a whole. The higher the volume, the more the fair market value of the company is likely to be reflected by its market capitalization.

Another example of the impact of volume on the accuracy of market capitalization is when a company has little or no trading activity and the market price is simply the price at which the most recent trade took place, which could be days or weeks ago. This occurs when there are no buyers willing to purchase the securities at the price being offered by the sellers and there are no sellers willing to sell at the price the buyers are willing to pay. While this is rare when the company is traded on a major stock exchange, it is not uncommon when shares are traded over-the-counter (OTC). Since individual buyers and sellers need to incorporate news about the company into their purchasing decisions, a security with an imbalance of buyers or sellers may not feel the full effect of recent news.