Providence Health & Services is a non-profit, Catholic health care system operating multiple hospitals across eight states, with headquarters in Renton, Washington. The health system includes 51 hospitals, more than 800 non-acute facilities and numerous other health, supportive housing and educational services in the states of the United States West Coast ( Alaska, Washington, Oregon, and California) and Montana, New Mexico, and Texas. Providence Health & Services was founded by the Sisters of Providence in 1859.

Providence Health System was managed by the Sisters of Providence until 1979 when a secular president was appointed.[ citation needed]

The company has a program in place designed to reduce the amount of food scraps that it sends to landfills. The program focuses on more accurate food purchasing and preparation practices, composting food scraps and donating edible food to nonprofits. Providence requires the chefs throughout its system to use centrally developed recipes and portion sizes that are designed to reduce waste and improve the nutritional value of the food served. In 2016, the company said, its program helped divert 204 tons of food waste from the landfill. [10] 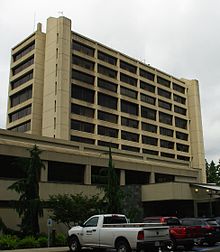