The prostate is an exocrine gland of the male reproductive system in most mammals and some invertebrates. It differs considerably among species anatomically, chemically, and physiologically. The word prostate comes from Ancient Greek προστάτης, prostátēs, literally "one who stands before", "protector", "guardian". [1]

Anatomically, the prostate can be subdivided in two ways: by zone or by lobe. It does not have a capsule; rather an integral fibromuscular band surrounds it. [2] It is sheathed in the muscles of the pelvic floor, which contract during the ejaculation. The prostate also contains some smooth muscles that also help expel semen during ejaculation.

The function of the prostate is to secrete a fluid which contributes to the volume of the semen. This prostatic fluid is slightly alkaline, milky or white in appearance, and in humans usually constitutes roughly 30% of the volume of semen, the other 70% being spermatozoa and seminal vesicle fluid. [3] The alkalinity of semen helps neutralize the acidity of the vaginal tract, prolonging the lifespan of sperm.

Disorders of the prostate include enlargement, inflammation, infection, and cancer. 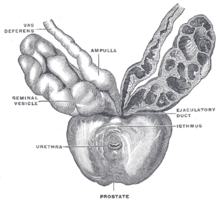 Prostate with seminal vesicles and seminal ducts, viewed from in front and above.

The prostate is a gland of the male reproductive system. In adults, it is about the size of a walnut. [4] The prostate is located in the pelvis. Within it sits the urethra coming from the bladder which is called the prostatic urethra and which merges with the two ejaculatory ducts. [4]

The mean weight of the normal prostate in adult males is about 11 grams, usually ranging between 7 and 16 grams. [5] The volume of the prostate can be estimated by the formula 0.52 × length × width × height. A volume of over 30 cm3 is regarded as prostatomegaly (enlarged prostate). A study stated that prostate volume among patients with negative biopsy is related significantly with weight and height ( body mass index), so it is necessary to control for weight. [6] The prostate surrounds the urethra just below the urinary bladder and can be felt during a rectal exam.

A surrounding fibrous layer is sometimes referred to as the prostatic capsule or prostatic fascia, [7] and a surrounding fibromuscular band is integral. [2] It is sheathed in the muscles of the pelvic floor, which contract during ejaculation.

The prostate can be subdivided in two ways, either by zone or by lobe. [4] Because of the variation in descriptions and definitions of lobes, zones form the predominant division. [4]

The "lobe" classification is more often used in anatomy. The prostate is incompletely divided into five lobes:

The prostate has been described as consisting of three or four zones. [4] [7] This "zone" classification is more often used in pathology. [8] The prostate gland has four distinct glandular regions, two of which arise from different segments of the prostatic urethra:

The veins of the prostate form a network – the prostatic venous plexus, primarily around its front and outer surface. [7] This network also receives blood from the deep dorsal vein of the penis, and is connected via branches to the vesical plexus and internal pudendal veins. [7] Veins drain into the vesical and then internal iliac veins. [7]

The tissue of the prostate consists of glands and stroma. [4] Tall column-shaped cells form the lining ( epithelium) of the glands. [4] These lie in either one layer or are pseudostratified. [7] The epithelium is highly variable and areas of low cuboidal or squamous epithelium are also present, with transitional epithelium in the distal regions of the longer ducts. [12] The glands are found as numerous follicles, which in turn drain into long canals and subsequently 12 - 20 main ducts, which in turn drain into the urethra as it passes through the prostate. [7] There are also a small amount of basal cells, which sit next to the basement membranes of glands, and act as stem cells. [4]

The stroma of the prostate is made up of fibrous tissue and smooth muscle. [4] The fibrous tissue separates the gland into lobules. [4] It also sits between the glands and is composed of randomly orientated smooth-muscle bundles that are continuous with the bladder. [13]

Condensation of mesenchyme, urethra, and Wolffian ducts gives rise to the adult prostate gland, a composite organ made up of several tightly fused glandular and non-glandular components.

The prostate gland enlarges over time, until the fourth decade of life. [7]

During male seminal emission, sperm is transmitted from the vas deferens into the male urethra via the ejaculatory ducts, which lie within the prostate gland. [20] Ejaculation is the expulsion of semen from the urethra. [20] Semen is moved into the urethra following contractions of the smooth muscle of the vas deferens and seminal vesicles, following stimulation, primarily of the glans penis. Stimulation sends nerve signals via the internal pudendal nerves to the upper lumbar spine; the nerve signals causing contraction act via the hypogastric nerves. [20] After traveling into the urethra, the seminal fluid is ejaculated by contraction of the bulbocavernosus muscle. [20] 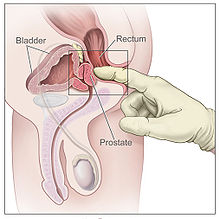 A digital rectal examinations may be performed to investigate how large a prostate is, or if a prostate is tender (which may indicate inflammation).[ citation needed] 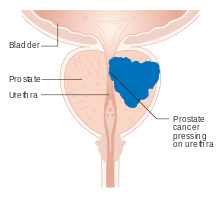 A diagram of prostate cancer pressing on the urethra, which can cause symptoms 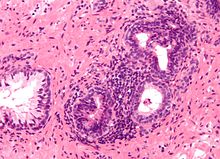 Micrograph showing an inflamed prostate gland, the histologic correlate of prostatitis. A normal non-inflamed prostatic gland is seen on the left of the image. H&E stain

Benign prostatic hyperplasia refers to an enlargement of the prostate due to non-malignant hyperplasia, that is very common in older men. [23] It is often identified when the prostate has enlarged to the point where urination becomes difficult. Symptoms include needing to urinate often (frequency), or taking a while to get started (hesitancy). If the prostate grows too large, it may constrict the urethra and impede the flow of urine, making urination difficult and painful and, in extreme cases, completely impossible, causing urinary retention. [23] Over time, chronic retention may cause the bladder to become larger and cause a backflow of urine into the kidneys ( hydronephrosis). [23]

BPH can be treated with medication, a minimally invasive procedure or, in extreme cases, surgery that removes the prostate. In general, treatment often begins with an alpha-1 adrenergic receptor antagonist medication such as tamsulosin, which reduces the tone of the smooth muscle found in the ureter that passes through the prostate, making it easier for urine to pass through. [23] For people with persistent symptoms, procedures may be considered. The surgery most often used in such cases is called transurethral resection of the prostate, [23] in which an instrument is inserted through the urethra to remove prostate tissue that is pressing against the upper part of the urethra and restricting the flow of urine. This results in the removal of mostly transitional zone tissue in a patient with BPH.[ citation needed] Minimally invasive procedures include transurethral needle ablation of the prostate (TUNA) and transurethral microwave thermotherapy (TUMT). [26] These outpatient procedures may be followed by the insertion of a temporary prostatic stent, to allow normal voluntary urination, without exacerbating irritative symptoms. [27] In some cases, "obesity management may be an effective method to reduce prostate volume." [6]

Prostate cancer is one of the most common cancers affecting older men in the UK, US and Northern Europe [23] and a significant cause of death for elderly men in these countries.[ citation needed] Often, a person does not have symptoms; when they do occur, symptoms may include frequency, urgency, hesitation and other symptoms associated with BPH. Uncommonly, such cancers may cause weight loss, urinary retention, or other symptoms due to lesions outside of the prostate, such as back pain. [23]

A digital rectal examination and the measurement of a prostate specific antigen (PSA) level are usually the first investigations done to check for prostate cancer. PSA values are difficult to interpret, because a high value might be present in a person without cancer, and a low value can be present in someone with cancer. [23] The next form of testing is often the taking of a biopsy to assess for tumour activity and invasiveness. [23] Because of the significant risk of overdiagnosis with widespread screening in the general population, prostate cancer screening is controversial. [28] If a tumour is confirmed, medical imaging such as an MRI or bone scan may be done to check for the presence of tumour metastases in other parts of the body. [23]

Prostate cancer that is only present in the prostate is often treated with either surgical removal of the prostate or with radiotherapy or by the insertion of small radioactive particles ( brachytherapy) [23] Cancer that has spread to other parts of the body is usually treated with hormone therapy, to deprive a tumour of sex hormones (androgens) that stimulate proliferation. This is often done through the use of GnRH analogues or agents that block the receptors that androgens act at, such as bicalutamide; occasionally, surgical removal of the testes may be done instead. [23] Cancer that does not respond to hormonal treatment, or that progresses after treatment, might be treated with chemotherapy such as docetaxel. Radiotherapy may also be used to help with pain associated with bony lesions. [23]

Sometimes, the decision may be made not to treat prostate cancer. If a cancer is small and localised, the decision may be made to monitor for cancer activity at intervals ("Active surveillance") and defer treatment. [23] If a person, because of frailty or other medical conditions or reasons, has a life expectancy less than ten years, then the impacts of treatment may outweigh any perceived benefits. [23]

John E. McNeal first proposed the idea of "zones" in 1968. McNeal found that the relatively homogeneous cut surface of an adult prostate in no way resembled "lobes" and thus led to the description of "zones". [8]

The prostate is found as a male accessory gland in all placental mammals excepting xenarthrans, martens, badgers, and otters. [29] The prostate glands of male marsupials are disseminate [30] and proportionally larger than those of placental mammals. [31] In some marsupial species, the size of the prostate gland changes seasonally. [32] The structure of the prostate varies, ranging from tubuloalveolar (as in humans) to branched tubular. The gland is particularly well developed in dogs, foxes and boars, though in other mammals, such as bulls, it can be small and inconspicuous. [33] [34] The prostate is the only accessory gland that occurs in male dogs. [35] Dogs can produce in one hour as much prostatic fluid as a human can in a day. They excrete this fluid along with their urine to mark their territory. [36] In many rodents and bats, the prostatic fluid contains a coagulant. This mixes with and coagulates semen during copulation to form a mating plug that temporarily prevents further copulation. [37] [38] In cetaceans the prostate is composed of diffuse urethral glands [39] and is surrounded by a very powerful compressor muscle. [40]

Prostatic secretions vary among species. They are generally composed of simple sugars and are often slightly alkaline. [41]

The prostate gland originates with tissues in the urethral wall. This means the urethra, a compressible tube used for urination, runs through the middle of the prostate. This leads to an evolutionary design fault for some mammals, including human males. The prostate is prone to infection and enlargement later in life, constricting the urethra so urinating becomes slow and painful. [42]

Monotremes and marsupial moles lack prostates, instead having simpler cloacal glands that carry out their function. [43] [44]

A prostate gland also occurs in some invertebrate species, such as gastropods ( slugs and snails). [45]

The Skene's gland, also known as the female prostate, is found in both female humans and rodents. Historically it was thought to be a vestigial organ, but recently it has been discovered that it produces the same protein markers, PSA and PAB, as the male prostate. [46] It functions as a histologic homolog to the male prostate gland. [47] [48]