From Wikipedia, the free encyclopedia
(Redirected from Pottawatomie)
This article is about the people. For the language, see Potawatomi language.
"Pottawatomie" redirects here. For other uses, see Pottawatomie (disambiguation).
Native American people of the Great Plains

The Potawatomi /pɒtəˈwɒtəmi/, [1] [2] also spelled Pottawatomi and Pottawatomie (among many variations), are a Native American people of the Great Plains, upper Mississippi River, and western Great Lakes region. They traditionally speak the Potawatomi language, a member of the Algonquin family. The Potawatomi call themselves Neshnabé, a cognate of the word Anishinaabe. The Potawatomi are part of a long-term alliance, called the Council of Three Fires, with the Ojibway and Odawa (Ottawa). In the Council of Three Fires, the Potawatomi are considered the "youngest brother" and are referred to in this context as Bodéwadmi, a name that means "keepers of the fire" and refers to the council fire of three peoples.

In the 19th century, they were pushed to the west by European/American encroachment in the late 18th century and removed from their lands in the Great Lakes region to reservations in Oklahoma. Under Indian Removal, they eventually ceded many of their lands, and most of the Potawatomi relocated to Nebraska, Kansas, and Indian Territory, now in Oklahoma. Some bands survived in the Great Lakes region and today are federally recognized as tribes. In Canada, there are over 634 recognized First Nation governments or bands.

The English "Potawatomi" is derived from the Ojibwe Boodewaadamii(g) ( syncoped in the Ottawa as Boodewaadmii(g)). The Potawatomi name for themselves ( autonym) is Bodéwadmi (without syncope: Bodéwademi; plural: Bodéwadmik), a cognate of the Ojibwe form. Their name means "those who tend the hearth-fire," which refers to the hearth of the Council of Three Fires. The word comes from "to tend the hearth-fire," which is bodewadm (without syncope: bodewadem) in the Potawatomi language; the Ojibwe and Ottawa forms are boodawaadam and boodwaadam, respectively.

The Potawatomi teach their children about the "Seven Grandfather Teachings" of wisdom, respect, love, honesty, humility, bravery, and truth toward each other and all creation, [3] each one of which teaches them the equality and importance of their fellow tribesmen and respect for all of nature’s creations. The story itself teaches the importance of patience and listening as it follows the Water Spider's journey to retrieve fire for the other animals to survive the cold. As the other animals step forth one after another to proclaim that they shall be the ones to retrieve the fire, the Water spider sits and waits while listening to her fellow animals. As they finish and wrestle with their fears, she steps forward and announces that she will be the one to bring it back. As they laugh and doubt her she weaves a bowl out of her own web that sails her across the water to retrieve the fire. She brings back a hot coal out of which they make fire, and they celebrate her honor and bravery. 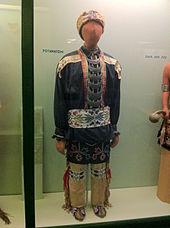 Regalia at the Field Museum in Chicago

The Potawatomi are first mentioned in French records, which suggest that in the early 17th century, they lived in what is now southwestern Michigan. During the Beaver Wars they fled to the area around Green Bay to escape attacks by both the Iroquois and the Neutral Nation, who were seeking expanded hunting grounds. It is estimated in 1658 that the Potawatomi numbered around 3,000.

As an important part of Tecumseh's Confederacy, Potawatomi warriors took part in Tecumseh's War, the War of 1812 and the Peoria War. Their alliances switched repeatedly between Great Britain and the United States as power relations shifted between the nations, and they calculated effects on their trade and land interests.

At the time of the War of 1812, a band of Potawatomi inhabited the area near Fort Dearborn, where Chicago developed. Led by the chiefs Blackbird and Nuscotomeg (Mad Sturgeon), a force of about 500 warriors attacked the United States evacuation column leaving Fort Dearborn; they killed most of the civilians and 54 of Captain Nathan Heald's force, and wounded many others. George Ronan, the first graduate of West Point to be killed in combat, died in this ambush. The incident is referred to as the " Fort Dearborn Massacre". A Potawatomi chief named Mucktypoke (Makdébki, Black Partridge), counseled his fellow warriors against the attack. Later he saved some of the civilian captives who were being ransomed by the Potawatomi. [4]

The British period of contact began when France ceded its lands after the defeat in the French and Indian War (aka Seven Years' War). Pontiac's Rebellion was an attempt by Native Americans to push the British and other European settlers out of their territory. The Potawatomi captured every British Frontier Garrison but the one at Detroit. [4]

The Potawatomi nation continued to grow and expanded westward from Detroit, most notably in the development of the St. Joseph villages adjacent to the Miami in southwestern Michigan. The Wisconsin communities continued and moved south along the Lake Michigan shoreline. [4]

The United States Treaty period of Potawatomi history began with the Treaty of Paris (1783), which ended the American Revolutionary War and established the United States' interest in the lower Great Lakes. It lasted until the treaties for Indian Removal were signed. The US recognized the Potawatomi as a single tribe. They often had a few tribal leaders whom all villages accepted. The Potawatomi had a decentralized society, with several main divisions based on geographic locations: Milwaukee or Wisconsin area, Detroit or Huron River, the St. Joseph River, the Kankakee River, Tippecanoe and Wabash Rivers, the Illinois River and Lake Peoria, and the Des Plaines and Fox Rivers.

The chiefs listed below are grouped by geographic area.

See also: Treaty with the Potawatomi 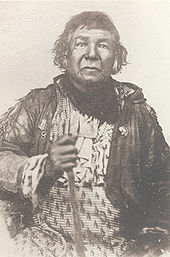 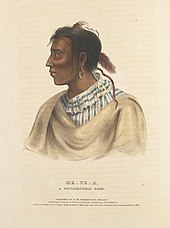 The removal period of Potawatomi history began with the treaties of the late 1820s, when the United States created reservations. Billy Caldwell and Alexander Robinson negotiated for the United Nations of Chippewa, Ottawa and Potowatomi in the Second Treaty of Prairie du Chien (1829), by which they ceded most of their lands in Wisconsin and Michigan. Some Potawatomi became religious followers of the "Kickapoo Prophet", Kennekuk. Over the years, the US reduced the size of the reservations under pressure for land by incoming European Americans.[ citation needed]

The final step followed the Treaty of Chicago, negotiated in 1833 for the tribes by Caldwell and Robinson. In return for land cessions, the US promised new lands, annuities and supplies to enable the peoples to develop new homes. The Illinois Potawatomi were removed to Nebraska and the Indiana Potawatomi to Kansas, both west of the Mississippi River. Often annuities and supplies were reduced, or late in arrival, and the Potawatomi suffered after their relocations. Those in Kansas later were removed to Indian Territory, now Oklahoma. The removal of the Indiana Potawatomi was documented by a Catholic priest, Benjamin Petit, who accompanied the Indians on the Potawatomi Trail of Death. Petit died while returning to Indiana. His diary was published in 1941 by the Indiana Historical Society. [7]

Many Potawatomi found ways to remain, primarily those in Michigan. Others fled to their Odawa neighbors or to Canada to avoid removal to the west. 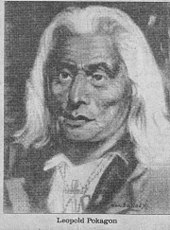 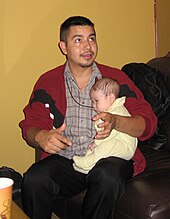 There are several active bands of Potawatomi.

La Chauvignerie (1736) and Morgan (1877) mention among the Potawatomi doodems (clans) being:

They regard Epigaea repens as their tribal flower and consider it to have come directly from their divinity. [14] Allium tricoccum is consumed in traditional Potawatomi cuisine. [15] They mix an infusion of the root of Uvularia grandiflora with lard and use it as salve to massage sore muscles and tendons. [16] They use Symphyotrichum novae-angliae as a fumigating reviver. [17] Vaccinium myrtilloides is part of their traditional cuisine, and is eaten fresh, dried, and canned. [18] They also use the root bark of the plant for an unspecified ailment. [19] 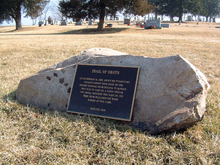 The Potawatomi first lived in Lower Michigan, then moved to northern Wisconsin and eventually settled into northern Indiana and central Illinois. In the early 19th century, major portions of Potawatomi lands were seized by the U.S. government. Following the Treaty of Chicago in 1833, by which the tribe ceded its lands in Illinois, most of the Potawatomi people were removed to Indian Territory west of the Mississippi River. Many perished en route to new lands in the west on their journey through Iowa, Kansas and Indian Territory (now Oklahoma), following what became known as the " Trail of Death".

Potawatomi (also spelled Pottawatomie; in Potawatomi Bodéwadmimwen or Bodéwadmi Zheshmowen or Neshnabémwen) is a Central Algonquian language and is spoken around the Great Lakes in Michigan and Wisconsin. It is also spoken by Potawatomi in Kansas, Oklahoma, and in southern Ontario. [21] There are fewer than 1300 people who speak Potawatomi as a first language, most of them elderly. [22] The people are working to revitalize the language.[ citation needed]

Many places in the Midwest have names derived from the Potawatomi language, including Waukegan, Muskegon, Oconomowoc, Pottawattamie County, Kalamazoo, and Skokie.