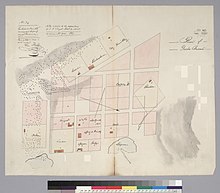 Portsmouth Square is located on the site of the first public square, The Grand Plaza, established in the early 19th century in the Mexican community of Yerba Buena, whose name was changed to San Francisco in 1847. During the Mexican–American War Captain John Berrien Montgomery of the USS Portsmouth was ordered to seize Yerba Buena. On July 9, 1846, the first American flag [2] was raised near the Mexican adobe custom house in the plaza that would eventually be named Portsmouth Square in honor of the ship.

Many historical events have happened at the plaza. In 1847, the first public school in California was erected at the southwest corner of plaza. On May 11, 1848, the discovery of gold was announced when Sam Brannan showed his gold to a crowd. On June 12, 1849, a crowd was gathered at the plaza, demanding election of delegates at the Monterey Constitutional Convention. An assembly was organized on July 16, 1849, to fight against a lawless body, ' The Hounds.' On August 29, 1850, a memorial service was held after the death of US President Zachary Taylor. The First Admission Day celebration was held October 29, 1850 when California became the 31st state of the United States. On June 1, 1852, a crowd protested against the purchase of the Jenny Lind Theatre as the city hall. On September 18, 1859, Colonel E. D. Baker delivered an oration after U.S. Senator David C. Broderick was killed in a duel with California Chief Justice David S. Terry. [3]

Director Don Siegal filmed a scene from the 1971 movie Dirty Harry in the Square. As the character "Dirty Harry" follows "Scorpio", it is possible to see the stone bridge [2] joining the park to the Chinese Culture Center of San Francisco, at what today is the Hilton San Francisco Financial District, 750 Kearny Street. 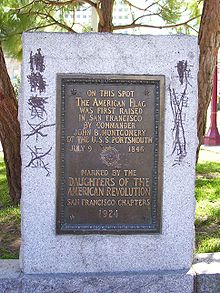 In 1987, the park underwent its second major renovation. The first phase involved installing new elevators and bathrooms on the top of the park. The second phase began in 1994, included installation of child play structures, Chinese chess tables, benches, and landscaping. Phase three included the construction of a new community room and play areas. This $3.9 million renovation was completed and the park was opened to the public in 2001. [4]

The square is referred to as the "Heart of Chinatown." [3] It features many markers and statues. There are three markers registered as California Historical Landmarks, honoring the first raising of the American flag on the square in 1846 (#119), the Eastern Terminus of the Clay Street Hill Railroad Company (#500), and the 1848 opening of the first public school in California (#587). [5] A monument to Robert Louis Stevenson is also located inside the park to commemorate its history. In addition, a statue of the Goddess of Democracy, a gift from the San Francisco Goddess of Democracy Statue Project, to commemorate the June 4th, 1989, Tiananmen Square Protests and massacre to the city, sits in the park.

A four-level underground parking garage is located beneath Portsmouth Square, accommodating an average of 50,000 vehicles per month. [6]

It was also home for a large number of homeless people. San Francisco Board of Supervisors President Aaron Peskin, who represented the area surrounding the park, and Mayor Gavin Newsom have criticized the Department of Recreation and Parks for failing in its upkeep of the park. Regarding these criticisms, the city department has tried to hire additional gardeners and custodians despite budget cuts. Another city department, Public Works, was urged by Newsom to help clean up the park, at least temporarily. [7]

The playground at the square features an installation by Mary Fuller and Robert McChesney called Tot Lot. The collection of sculptures are made of concrete and glass and overall encompass approximately 86 in. x 30 ft. 7 in. x 25 ft. 9 in. Completed in 1983 and dedicated in 1984, the sculptures are used as playground equipment such as a slide and a sandbox. It consists of six animals from the Chinese zodiac: a Goat, a Tiger, a Monkey, a Rabbit, a Dragon and a Snake. All of the animals have glass eyes and are abstract in design. [8]

Tot Lot was commissioned by the city and county of San Francisco's Bureau of Architecture and two of the pieces, the ram and rabbit, were gifts of the Tamarack Foundation. The architect's office, Recreation and Parks Department and San Francisco Arts Commission developed the piece. Children use the pieces frequently due to its playground status. In 1994 it was surveyed as part of the Smithsonian Institution's Save Outdoor Sculpture! program in 1994 and was described as needing conservation treatment. [8]