), officially the French Republic (French: République française), is a country, primarily located in Western Europe, consisting of metropolitan France and several overseas regions and territories. The metropolitan area of France extends from the Rhine to the Atlantic Ocean and from the Mediterranean Sea to the English Channel and the North Sea. It borders Belgium, Luxembourg and Germany to the northeast, Switzerland, Monaco and Italy to the east and Andorra and Spain to the south. The overseas territories include French Guiana in South America and several islands in the Atlantic, Pacific and Indian Oceans. The country's 18 integral regions (five of which are situated overseas) span a combined area of 643,801 km2 (248,573 sq mi) and a total population of 67.07 million (). France is a unitary semi-presidential republic with its capital in Paris, the country's largest city and main cultural and commercial centre. Other major urban areas include Lyon, Marseille, Toulouse, Bordeaux, Lille and Nice. France, including its overseas territories, has the most time zones of any country, with a total of 12.

During the Iron Age, what is now metropolitan France was inhabited by the Gauls, a collection of Celtic tribes. The area was annexed by Rome in 51 BC, developing a distinct Gallo-Roman culture that laid the foundation of the French language. The Germanic Franks arrived in 476 and formed the Kingdom of Francia, which became the heartland of the Carolingian Empire. The Treaty of Verdun of 843 partitioned the empire, with West Francia becoming the Kingdom of France in 987.

For much of the High Middle Ages, France was a highly decentralized feudal kingdom in which the authority of the king was barely felt. King Philip Augustus achieved remarkable success in the strengthening of royal power and the expansion of his realm, doubling its size and defeating his rivals. By the end of his reign, France had emerged as the most powerful state in Europe. In the mid-14th century, French monarchs were embroiled in a series of dynastic conflicts with their English counterparts, which lasted over 100 years. Emerging victorious from said conflicts, disputes with Spain and the Holy Roman Empire soon followed during the Renaissance but were ultimately less successful. However, French culture flourished and a global colonial empire was established, which by the 20th century would become the second largest in the world. The second half of the 16th century was dominated by religious civil wars between Catholics and Protestants ( Huguenots), which severely weakened the country. But France once again emerged as Europe's dominant cultural, political, and military power in the 17th century under Louis XIV following the Thirty Years' War. An inadequate financial model and inequitable taxation system as well as endless and costly wars to maintain its predominant position, the Seven Years' War and American War of Independence among them, left the heavily indebted kingdom in a precarious situation by the end of the 18th century. The French Revolution in 1789 saw the fall of the absolute monarchy that characterized the Ancien Régime and from its ashes, rose one of modern history's earliest republics, which drafted the Declaration of the Rights of Man and of the Citizen. The declaration expresses the nation's ideals to this day.

Following the revolution, France reached its political and military zenith in the early 19th century under Napoleon Bonaparte, subjugating much of continental Europe and establishing the First French Empire. The French Revolutionary and Napoleonic Wars shaped the course of European and world history. After the collapse of the empire and a relative decline, France endured a tumultuous succession of governments culminating in the establishment of the French Third Republic in 1870 in the midst of the Franco-Prussian War. France was one of the prominent participants of World War I, from which it emerged victorious, and was one of the Allied powers in World War II, but came under occupation by the Axis in 1940. Following liberation in 1944, a Fourth Republic was established and later dissolved in the course of the Algerian War. The Fifth Republic, led by Charles de Gaulle, was formed in 1958 and remains to this day. Algeria and nearly all other French colonies became independent in the 1960s, with most retaining close economic and military connections with France. ( Full article...)

Read more about France, its history and people
Refresh with new selections below (purge)

This is a Featured article, which represents some of the best content on English Wikipedia..

View of the dome of La Coupole

La Coupole (English: The Dome), also known as the Coupole d'Helfaut-Wizernes and originally codenamed Bauvorhaben 21 (Building Project 21) or Schotterwerk Nordwest (Northwest Gravel Works), is a Second World War bunker complex in the Pas-de-Calais department of northern France, about 5 kilometres (3.1 mi) from Saint-Omer, and some 14.4 kilometers (8.9 miles) south-southeast from the less developed Blockhaus d'Eperlecques V-2 launch installation in the same area. It was built by the forces of Nazi Germany between 1943 and 1944 to serve as a launch base for V-2 rockets directed against London and southern England, and is the earliest known precursor to modern underground missile silos still in existence.

Constructed in the side of a disused chalk quarry, the most prominent feature of the complex is an immense concrete dome, to which its modern name refers. It was built above a network of tunnels housing storage areas, launch facilities and crew quarters. The facility was designed to store a large stockpile of V-2s, warheads and fuel and was intended to launch V-2s on an industrial scale. Dozens of missiles a day were to be fuelled, prepared and launched in rapid sequence against London and southern England. ( Full article...)
edit

Pierre Benjamin Monteux (4 April 1875 – 1 July 1964) was a French (later American) conductor. After violin and viola studies, and a decade as an orchestral player and occasional conductor, he began to receive regular conducting engagements in 1907. He came to prominence when, for Sergei Diaghilev's Ballets Russes company between 1911 and 1914, he conducted the world premieres of Stravinsky's The Rite of Spring and other prominent works including Petrushka, Ravel's Daphnis et Chloé, and Debussy's Jeux. Thereafter he directed orchestras around the world for more than half a century.

From 1917 to 1919 Monteux was the principal conductor of the French repertoire at the Metropolitan Opera in New York. He led the Boston Symphony Orchestra (1919–24), Amsterdam Concertgebouw Orchestra (1924–34), Orchestre Symphonique de Paris (1929–38) and San Francisco Symphony (1936–52). In 1961, aged eighty-six, he accepted the chief conductorship of the London Symphony Orchestra, a post which he held until his death three years later. Although known for his performances of the French repertoire, his chief love was the music of German composers, above all Brahms.

In 1932 he began a conducting class in Paris, which he developed into a summer school that was later moved to his summer home in Les Baux in the south of France. After moving permanently to the US in 1942, and taking American citizenship, he founded a school for conductors and orchestral musicians in Hancock, Maine.

Selected fare or cuisine - show another 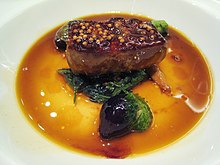 listen), French:  [fwa ɡʁɑ]; French for '"fat liver"') is a specialty food product made of the liver of a duck or goose. According to French law, foie gras is defined as the liver of a duck or goose fattened by gavage. In Spain and other countries, it is occasionally produced using natural feeding. Ducks are force-fed twice a day for 12.5 days and geese three times a day for around 17 days. Ducks are typically slaughtered at 100 days and geese at 112 days.

Foie gras is a popular and well-known delicacy in French cuisine. Its flavor is described as rich, buttery, and delicate, unlike that of an ordinary duck or goose liver. Foie gras is sold whole, or is prepared into mousse, parfait, or pâté, and may also be served as an accompaniment to another food item, such as steak. French law states that "Foie gras belongs to the protected cultural and gastronomical heritage of France." ( Full article...)

This is a Good article, an article that meets a core set of high editorial standards.

A cartoon from Punch from 1890: The phylloxera, a true gourmet, finds out the best vineyards and attaches itself to the best wines.

The Great French Wine Blight was a severe blight of the mid-19th century that destroyed many of the vineyards in France and laid waste the wine industry. It was caused by an aphid (the actual genus of the aphid is still debated, although it is largely considered to have been a species of Daktulosphaira vitifoliae, commonly known as grape phylloxera) that originated in North America and was carried across the Atlantic in the late 1850s. While France is considered to have been worst affected, the blight also did a great deal of damage to vineyards in other European countries.

How the Phylloxera aphid was introduced to Europe remains debated: American vines had been taken to Europe many times before, for reasons including experimentation and trials in grafting, without consideration of the possibility of the introduction of pestilence. While the Phylloxera was thought to have arrived around 1858, it was first recorded in France in 1863, near the former province of Languedoc. It is argued by some that the introduction of such pests as phylloxera was only a problem after the invention of steamships, which allowed a faster journey across the ocean, and consequently allowed durable pests, such as the Phylloxera, to survive the trip. ( Full article...)
edit

Picture of the Month  (Archive) 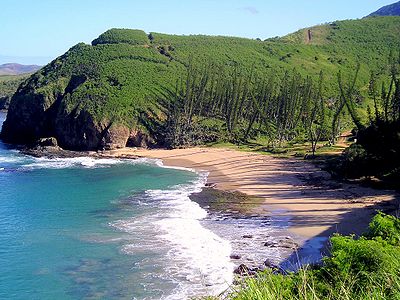 Did you know - show different entries

Sports- Sport in France - French sportspeople - France at the Olympics - 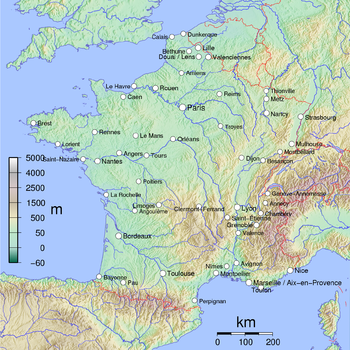