From Wikipedia, the free encyclopedia
Seaport in Broward County, Florida 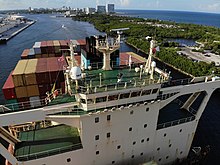 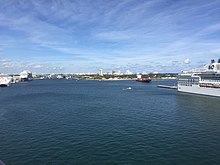 View from onboard a cruise ship

Port Everglades is a seaport in Fort Lauderdale, Florida, located in Broward County. Port Everglades is one of South Florida's foremost economic engines, as it is the gateway for both international trade and cruise vacations. In 2019, Port Everglades was ranked the third busiest cruise homeport in the world, accommodating more than 3.89 million passengers. [3] It was also one of the busiest container port in Florida and ranked among the top 20 busiest in the United States, moving more than 1 million TEUs annually. [4]

The Port Everglades Department is a self-supporting enterprise fund of the Broward County government, with operating revenues of approximately $170.7 million in fiscal year 2019. The port does not rely on local property taxes for operations. The total value of economic activity at Port Everglades is approximately $32 billion annually. Approximately 219,000 statewide jobs are impacted by the port, including more than 13,000 people who work for companies that provide direct services to Port Everglades.

Port Everglades is composed of land within three municipalities, Hollywood, Fort Lauderdale and Dania Beach and unincorporated Broward County. [6] Port Everglades is a man-made seaport. The port was originally dredged from Lake Mabel, a natural body of water that was a wide and shallow section of the Florida East Coast Canal system. In 1911, the Florida Board of Trade passed a resolution that called for a deep-water port. The port was originally intended to ship produce to the North and the West. In 1913, the Fort Lauderdale Harbor Company was formed and eventually dug out the Lake Mabel Cut, which opened the New River to the sea and created access for small boats. [5]

In 1924, the founder and mayor of the city of Hollywood, Florida, Joseph Wesley Young, bought 1,440 acres (5.8 km2) of land adjacent to the lake. He then created the Hollywood Harbor Development Company. Three years later, the Florida Legislature established the Broward County Port Authority. On February 22, 1928, 85 percent of Broward County's residents gathered for a ceremony in which President Calvin Coolidge was to push a button from the White House detonating explosives to remove the rock barrier separating the harbor from the Atlantic Ocean. The button malfunctioned, but the barrier was removed shortly thereafter. [7]

Bay Mabel Harbor was dedicated on February 22, 1928. Many of South Florida's local women's clubs agreed that the port needed a new name to better represent the region. They held a name changing contest, and the name Port Everglades was selected. The reason for this was as follows: "The gateway to the rich agricultural area embraced in the 4,000,000 acres (1,600,000 hectares) at the Port's very backdoor." [5] The container handling capacity of the port was increased with a new 41 acres (17 hectares) terminal, completed in 2010. The expansion increased Port Everglades' freight handling area by 15%. [8]

In 2015, the US Army Corps of Engineers approved a new phase of expansion for Port Everglades with the deepening and widening of the port's channels. The project received federal authorization in December 2016 under the Water Infrastructure Improvements for the Nation (WIIN) Act. The port served ships from Europe and South America that were too large to fit through the Panama Canal, but the ships still had to be under a certain load to fit properly in the port. The expansion was planned to increase main navigational channels from 42 feet (13 meters) to 50 feet (15 m), and to deepen and widen both the Entrance Channel and parts of the Intracoastal Waterway. The project was planned to be completed in 2028, create approximately 4,789 construction jobs and 1,491 direct jobs locally, and cost $509.6 million. [9] [10] In February 2020, the port received $29.1 million from Congress for the Intracoastal Waterway portion of the expansion; a section of the Waterway would be widened by 250 feet and be completed by 2023. The remaining funds, estimated up to $437 million, is expected to arrive at the end of 2021 and fund the deepening portion of the project, now scheduled to be completed between 2024 and 2026. [11]

In May 2017, Port Everglades received approval to begin the Southport Turning Notch Extension (STNE) project, its largest capital improvement project in the Port's history. [12] The existing deepwater turn-around area would be lengthened by 1,500 feet, from 900 feet to 2,400 feet. [12] The lengthening makes it possible for up to five new cargo ship berths to be added. [12] Additionally, existing gantry crane rails will be extended, and three new super-post-Panamax container gantry cranes where manufactured to supplement the expansion. [12] The STNE also replaced 8.7 acres of an existing mangrove conservation easement with a 16.5-acre mangrove upland easement. [12] In June 2017, Port Everglades received approval to purchase the three new gantry cranes [13] and in June 2018, Port Everglades Chief Executive Steven Cernak gave the approval to begin manufacturing three "Super Post- Panamax" gantry cranes to increase the port's cargo volume. [14] Each crane, manufactured by ZPMC, cost $13.8 million, and measures 175 feet tall. They are expected to arrive in 2020. [14] [15]

Port Everglades has a large economic impact on Broward County. In FY2019, the Port generated over $32 billion in economic activity and more than 219,000 statewide jobs. [16] As the third-busiest cruise homeport in the world, it directly affects the region's tourism industry, with more than 3.89 million cruise passengers arriving in 2019 [17] According to a 2015 study, 62% of surveyed passengers stayed in South Florida for at least a night prior to their cruise and 21% arrived at their cruise directly from Fort Lauderdale-Hollywood International Airport. 21% of surveyed passengers stayed in South Florida after their cruise. [18]

In 2019, Port Everglades generated over $32 billion in business activity. The port also generated over 219,000 jobs throughout the state of Florida. [19] This resulted in a total of $809,333 taxes collected on the state and local level. In 2017, Port Everglades was also ranked America's second-largest port for exports to Cuba, behind Port of Brunswick in Georgia. [20]

Condominium residents who live in buildings next to the channel of Port Everglades often bid bon voyage to cruise ships as they embark on their voyages from Port Everglades with the "Condo Salute." The residents blow horns, ring bells, or wave scarves, and the ships often respond by blowing their horns back. [21]

Harmony of the Seas docked at Port Everglades

An aerial shot of the stern of Carnival Conquest and the bow of Caribbean Princess both docked at Port Everglades.