From Wikipedia, the free encyclopedia
This article is about the port. For the city, see Cape Canaveral, Florida.

Port Canaveral is a cruise, cargo, and naval port in Brevard County, Florida, United States. It is one of the busiest cruise ports in the world with 4.5 million cruise passengers passing through during 2016. [3] Over [4]6 million short tons (5.4 Mt) of bulk cargo moves through each year.

Primary cargoes include slag, salt, autos/trucks, containers, petroleum, heavy equipment, lumber, and aggregate. [5] The port has conveyors and hoppers for loading products directly into trucks and facilities for bulk-cargo containers. The channel is about 44 feet (13 m) deep. [6]

The port exports fresh citrus; bulk-frozen citrus juice stored in one of the largest freezer warehouses in the state; cement; and building materials. The port receives lumber, salt for water-softening, automobiles, and steel sheet and plate. It transships items for land, sea, air, and space.

On average, ten ships enter the port each day. This includes ships from cruise lines such as Carnival, Disney, Royal Caribbean, Norwegian, and more. [7] [8]

The Canaveral Port Authority was established in 1953 by the State Legislature and consists of the Board of Commissioners and the Executive Management Team. The Board sets policies such as fiscal, regulatory, and operations, while the executives are responsible for administrative and operational duties. In October 2015 the board voted unanimously to terminate embattled CEO John Walsh. Walsh clashed with residents over a controversial plan to build a cargo railway through a federally managed wildlife refuge. Walsh drew community outrage after calling opponents of his plan " Luddites" and "dogs chasing moving cars." Walsh lied about documentation from the United States Air Force, relating to building the Canaveral Rail through the Cape Canaveral Air Force Station. [9]

The five Commissioners of the Board are elected from the surrounding area by popular vote. They must live in specific areas but are elected by voters in all five districts. The races are partisan.

The Executive Management Team is headed by the Chief Executive Officer (CEO). [13] [14]

A columnist grouped the history of the actual port into four eras, roughly paralleling the terms of the several directors: 1) initial construction and operation of the port with no clearcut separation of governance and management 1947–2004, 2) expansion of port facilities. Port becomes second in cruise business worldwide 2004–2013, 3) political friction between governance and management 2013–2016, 4) modern era 2016–today. [17]

A post office in the area was built and listed in the US Post Office application as Artesia. [18] and retained this name from 1893–1954; and then went into service for Port Canaveral from 1954–1962.

Noah Butt [20], a former speaker of the Florida House of Representatives, was the first Chairman of the Canaveral Port Authority. [21] The first port manager, George King, was announced in 1954. Commercial fishing had already begun at the port, and in the next year commercial shipping began, with a load of bagged cement delivered by the SS MormacSpruce.[ citation needed] In 1955, the Tropicana Corporation began building a refrigerated warehouse for storing orange juice, a local agricultural product, prior to shipping.

Cruise traffic appeared at the port in 1964, with the SS Yarmouth Castle, recently purchased by Yarmouth Cruise Lines from the Chadade Steamship Company. The ship was American owned, with registration from Panama. The ship burned at sea between Miami and Nassau, Bahamas in 1965, and cruise traffic was limited until the 1980s.

In 1965, a lock was dedicated at the port, as part of the Canaveral Barge Canal. The Canaveral Lock is still in operation and is maintained by the United States Army Corps of Engineers. The focus of the port throughout the 1960s and 1970s remained commercial fishing and shipping, with three 400-foot (120 m) cargo piers built on the north side of the Port in 1976, and a succession of warehouses built in the port area. 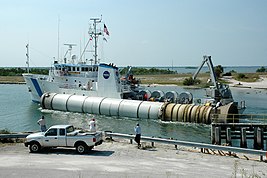 The rocket booster recovery ship Freedom Star with a spent solid rocket booster (SRB) from the STS-114 launch in tow as it makes it way through Port Canaveral.

Port Canaveral has played a role in support of NASA projects out of nearby Kennedy Space Center. During the Apollo program, segments of the Saturn V rocket transited through the port and lock. Most recently the Space Shuttle's external tanks were floated into Port Canaveral for each mission, and the solid rocket boosters were towed back through Port Canaveral after being fished out of the Atlantic Ocean after each launch. NASA contributed $250,000 for improvements in the lock in 1965. [22]

Prior to its disestablishment in 2000, Premier Cruise Line was headquartered in Cape Canaveral. [24] [25]

In 2009, a commissioner resigned and the Florida Department of Law Enforcement announced that it was conducting an investigation into possible corruption at the port. [27]

In 2009, the last cruise company to offer gambling, SunCruz Casinos, filed for Chapter 7 bankruptcy ( liquidation). The companies failed due to competition from land-based gambling activities in Seminole Casinos, and Greyhound racing venues. Gambling liners hit a high on 1.0 million passengers in 2004, before starting to decline. [28] Casino operations generated about $5–$6 million annually for the port. [29]

Mega-cruise ships Freedom of the Seas and Carnival Dream were homeported in Port Canaveral in 2009, followed by the Disney Dream in 2011.

In the 2010s, SpaceX began using the port for their autonomous spaceport drone ships. In April 2016, the ASDS Of Course I Still Love You returned the first Falcon 9 booster recovered at sea to Port Canaveral. [30]

A recent addition to the port is the seven-story Exploration Tower, which offers tourists almost 550,000 square feet (51,000 m2) of exhibit space, interactive displays, two observation decks – one inside and one outside – a 72-seat auditorium, event rooms, and a café and gift shop. [32]

Carnival, Disney, Norwegian and Royal Caribbean International are some of the cruise lines which dock at one of the five cruise terminals. The port hosted 109,175 multi-day cruise passengers in October 2008. There was a high of 307,005 passengers in April 2009. This fell to a seasonal low of 221,557 in October. With the loss of daily gambling ship cruises, port authorities do not expect this high to be exceeded for some time. [33] There were 2.8 million passengers in 2010. [34]

In the early 1980s, a new port director, Charles Rowland, shifted the focus towards developing the port to a Cruise port. In 1982, a 20,000 square feet (2,000 m2) warehouse on the north side of the port was converted into Cruise Terminal 1. The SS Scandinavian Sea, a 10,427-ton ship, was the first cruise ship to home-port at Port Canaveral. Early cruises were simple day cruises out into the ocean and back. The Port then purchased two former Bicentennial exhibit halls from NASA in 1983 and they became Terminals 2 and 3 in 1983. The following year the SS Royale of Premier Cruise Line was home-ported at Port Canaveral. The first year-round 3- and 4-day cruises to the Bahamas began. A fourth cruise terminal was built in 1986. Expansion into the Western Turning Basin began with the construction of Terminal 5. The Carnival Fantasy started sailing from there at that time becoming the first mega-ship to call the Port home.

In December 2014, Port Canaveral and Royal Caribbean International opened Terminal 1, a new terminal building built to handle the Oasis class ships. It was announced in March 2015 that Port Canaveral would become the new home port of the world's largest cruise ship, the Oasis of the Seas. [35]

Ships based out of Port Canaveral

The following ships are home-ported at Port Canaveral:

MS Freedom of the Seas at Port Canaveral in 2016

Future ships based out of Port Canaveral [39]

The Naval Ordnance Test Unit operates the naval port. They have 100 sailors and 70 subcontractors. [40] [41]

The SeaFest seafood festival was first held in 1983. [51] The celebration occurred over three days in early spring, and was co-hosted by the Cocoa Beach Area Chamber of Commerce and the Canaveral Port Authority. It featured live music, local artists, and seafood. In 2005, the final year of the festival at the port, 5,000 pounds (2,300 kg) of freshly caught fish, including flounder, Florida rock shrimp, blue crab claws and 100 US gallons (380 l; 83 imp gal) of seafood chowder were consumed at the festival. In 2006, because of security concerns and the site being needed for cargo, the festival was forced to move elsewhere and was renamed. In 2008 it tried to move back but was canceled.

Tugboats at dock in Port Canaveral (2016)

In 2018, the port announced a planned agreement with Carnival Cruise Line to accommodate Carnival's new 180,000-short-ton (160,000 t) ship. This ship would use the now under construction Terminal 3 as its home-port. [56]

To counteract this effect the Canaveral Harbor Federal Sand Bypass Project transfers sand from the shoreline north of the harbor entrance to areas of shoreline south of the entrance. This plan is implemented through a partnership of Canaveral Port Authority, the U.S. Army Corps of Engineers (Jacksonville District), and the State of Florida and Brevard County. [60]