From Wikipedia, the free encyclopedia
Town in Newfoundland and Labrador, Canada

Placentia is a town located in the Canadian province of Newfoundland and Labrador. It consists of the Argentia Industrial Park and amalgamated communities of Townside, Freshwater, Dunville, Southeast, and Jerseyside.

There is considerable evidence that Placentia Bay was intermittently occupied by Little Passage people. [1] Their descendants, the Beothuk, continued to settle there until the 17th century. Remnants of Beothuk occupation from the surrounding area has been carbon dated back to as far as 1500 CE. [1] Whether the Beothuk had come to permanently settle or just to fish has proved difficult to ascertain. [1] By the late 17th century, the English and French settlers and fishermen had claimed the bays of Placentia. [2] This effectively cut the natives off from valuable salmon, seal, and other valuable coastal resources. [2] This is one of several reasons attributed as to why the Beothuk eventually disappeared from Placentia, as well as other several other areas of Newfoundland.

It is unclear when Placentia terrain was first settled by Europeans, but Basque fishermen were fishing in the area as early as the beginning of the 16th century, using Placentia as a seasonal centre of operations. The last will of a Basque seaman has been discovered in an archive in Spain in which Domingo de Luca asks in 1563, “that my body be buried in this port of Plazençia in the place where those who die here are usually buried.” It is believed to be the oldest original civil document written in Canada.

Contemporary scholars think that land called Vinland extending from Nova Scotia to L'Anse aux Meadows consisted of at least a few settlements; [3] probably on the Avalon Peninsula too. "Placentia" may be derived from a similar name of an old Basque villa called Placencia de las Armas ( Basque: Soraluze), which is located in the Gipuzkoa province of the Basque Country.

Placentia may also be derived from the Latin placentia ("smooth"), a name also probably given by the Basques. [4] Placentia's large, rocky beach meant that fish could be salted and dried on the beach rocks rather than on a constructed wooden fishing stage, saving both time and effort.[ citation needed]

In 1655, the French, who controlled more than half of the island of Newfoundland, and most of Atlantic Canada, made Placentia (French: Plaisance) their capital. They built Fort Plaisance in 1662, which was followed by Fort Royal in 1687, and Fort Saint Louis in 1691. The establishment of a fort with a garrison allowed fishermen to pursue their activities with greater safety in neighbouring harbours. The French garrisons at Plaisance were small, but despite that fact, the soldiers and French privateers managed to hold their own in the face of numerous English attacks during the two major conflicts of the Nine Years' War and the War of the Spanish Succession, which marked the colony's history. Recollect (Franciscan) friars from New France built a friary here in 1689, which lasted until the expulsion of the French in 1714. In 1692, Louis-Armand de Lom d'Arce de Lahontan, Baron de Lahontan defended the French port. [5] [6]

In 1711, the British Rear-Admiral Hovenden Walker considered attacking the French at Placentia with a Royal Navy fleet containing 15 ships, armed with a total of 900 cannons, and transporting 4,000 soldiers. However, he decided that doing so was not a viable option. [7]

In 1713, the Treaty of Utrecht forced the French to abandon their Placentia Bay settlements and migrate to Louisbourg, and Placentia became a British possession. Many of the French fishermen who had to abandon the fisheries in Placentia ended up at the fisheries in Isle Royale, otherwise known as Cape Breton Island. [8] In the spring of 1714, the governor of Plaisance began organizing the emigration. [9] Three royal ships accompanied by merchant vessels took the French residents of Placentia to the future site of Louisbourg. [8] The group consisted of 116 men, 10 women and 23 children. [8] The Miꞌkmaq who had resided there also abandoned Placentia following the Treaty of Utrecht. [10] William Taverner claims that the Miꞌkmaq likely left because they had been deprived of their French trading partners. [10]

For a time in the 18th century, it still rivalled St. John's in size and importance, as evidenced by the future King William IV's summering at Placentia in 1786 and using it as his base of operations when acting as surrogate judge in Newfoundland. [11] The town was described by the then-Prince as "a more decent settlement than any we have yet seen in Newfoundland" and was reported as having a population between 1,500 and 2,000 people. [11]

Considering that the population of Newfoundland was reported as 8,000 11 years earlier, in 1775, Placentia's relative size and importance becomes apparent.

Placentia at the beginning of the 20th century.

By the 19th century, it was more fully eclipsed by St. John's and Harbour Grace, Placentia continued to be an important town, regional centre to the southern Avalon Peninsula and the eastern Burin Peninsula.

From the mid-18th century through to the 1830s, numerous Irish immigrants from Waterford, Wexford, Kilkenny and Cork settled in Placentia, so that the population of the modern town is largely of a mixture of West Country English and south-eastern Irish background. In the 18th century there were also a large number of settlers from the Channel Islands, from which Jerseyside, a prominent section of the town, derives its name. Some time after 1810 General George Garth was appointed as Lieutenant Governor of Placentia, a post he held until his death in 1817.

In 1940, via an agreement between the British and American governments (Newfoundland not joining Canada until 1949), a large American military base was constructed at nearby Argentia (which is now within the town of Placentia's boundaries). For a time, this was the largest American military base outside of the United States, and it played an integral role in World War II, earning the nickname "the Gibraltar of the Atlantic."

This huge development revolutionized the Placentia area both economically and culturally. Essentially, the American base introduced a widespread cash-based economy. Suddenly, people who had fished all of their lives (engaging in a type of barter system called the truck system) had access to good-paying jobs on the American base. American technology enriched the living standards of Placentia residents, while the local culture was influenced strongly by the American presence. Similarly, it prompted a huge population boom, growing from 1,900 people in 1935 [12] to well over 8,000 in the 1960s (note: these figures account for the current boundaries of Placentia, which at the time consisted of four separate towns: Placentia, Dunville, Jerseyside, and Freshwater).

The post office was established in 1851. The first postmistress in 1863 was Mary Morris.

On September 16, 1870 it became the seat of the Catholic pre-diocesan Apostolic Prefecture of Placentia, but instead of becoming a diocese it was suppressed in 1891, its territory being merged into the Diocese of St. John’s, Newfoundland. [13] 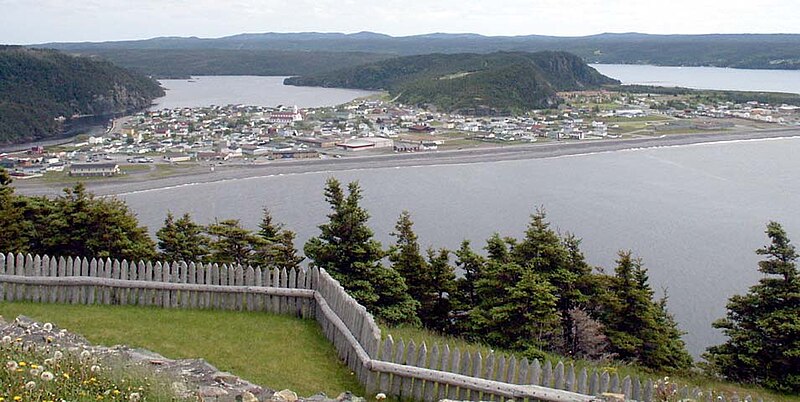 Placentia as viewed from the site of a former fortress, now a national historic site