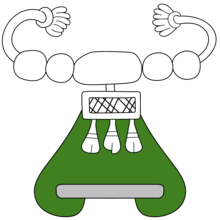 The Nahuas of El Salvador ( Kuskatan), better known as "Pipiles" in the academic literature, are an indigenous people who live in western El Salvador, which they call Kuskatan. The Pipil language, or Nawat, belongs to the Nahuatl dialect group, which stretches from Durango in Mexico to El Salvador, and historically as far as the Nicoya Peninsula of Costa Rica. It is thought that the Pipil, along with the neighbouring Nicarao people, migrated from Central Mexico to their present location around 900 AD, after the Chichimeca-Toltec civil war. As they settled in the area, they founded the city-state of Kuskatan, absorbed many other preexisting polities, and intermarried with the native peoples, mostly Lenca, Poqomam, and Xinca.

Their cosmography is related to that of the Toltec, Mayan and Lenca [1] said by oral tradition to have been adopted by the Ch'orti' and Poqomam Mayan people during the Pipil exodus in the 9th century CE, led by Topiltzin Quetzalcoatl.[ citation needed]

The name Pipil is the most commonly encountered term in the anthropological and linguistic literature. This exonym derives from the closely related Nahuatl word -pil "son, boy". Archaeologist William Fowler notes that pipil can be translated as "noble" and surmises that the invading Spanish and their Indian auxiliaries the Tlaxcala used the name as a reference to the population's elite, known as Pipiltin, who owned land and composed a sovereign society state during the Toltec expansion. The Nawat Pipil themselves tell of a time when the Toltec children had to flee to safety during the Chichimeca-Toltec civil war and how they descended from Nanahuatzin. In this reading, the name "Pipil" only later became associated with the people as a whole. The Spanish translated the term pipil as "childish" because of the simple form of Nahuatl spoken by the Tlaxcala and Mexica people living at a distance from the core civilization in Mexico.[ citation needed]

The Pipil speak an endangered Uto-Aztecan language Nawat, but there is a movement of revitalization among young Nahua people.

For most authors the term Pipil or Nawat is used to refer to the language in Central America only (i.e., excluding Mexico). However, the term (along with the synonymous Eastern Nahuatl) has also been used to refer to Nahuatl language varieties in the southern Mexican states of Veracruz, Tabasco, and Chiapas, that like Pipil have reduced the earlier /tl/ sound to a /t/. The varieties spoken in these three areas do share greater similarities with Nawat Pipil than the other Nahuatl varieties do (suggesting a closer connection); however, Campbell (1985) considers Nawat distinct enough to be a language separate from the Nahuatl complex, thus rejecting an Eastern Nahuatl subgrouping that includes Nawat.

Other authors use the term Aztec to refer to all closely related languages in this region as a single language, not distinguishing Nahuat from Nahuatl (and sometimes not even separating them from Pochutec). The classification of Nahuan that Campbell argues for (1985, 1997) has been superseded by newer and more detailed classifications. Currently, the widely accepted classifications by Lastra de Suarez (1986) and Canger (1988) see Pipil as a Nahuan dialect of the eastern periphery.

Dialects of Nawat include the following[ citation needed]:

Today Nawat is seldom used except in some rural areas and mostly as phrases sustained in households in the Sonsonate and Ahuachapán departments. Cuisnahuat and Santo Domingo de Guzmán have the highest concentration of Nawat Pipil speakers. Campbell's 1985 estimate (fieldwork 1970-1976) was 200 remaining speakers although as many as 2000 speakers have been recorded in official Mexican reports.[ citation needed] Gordon (2005) reports only 20 speakers (from 1987). The exact number of speakers is difficult to determine because native Nawat speakers do not wish to be identified due to historic government repression of aboriginal Salvadorean, such as La Matanza ("The Massacre") of 1932.

A cohesive group sharing a central Mexican culture migrated to the southern Guatemalan piedmont during the Late Classic. They settled around the town of Santa Lucía Cotzumalguapa, a region rich in natural resources, particularly cacao, indigo dye and tropical fruits, and erected Monument 4 between the Late and Terminal Classic periods. The culture lasted until the Spanish conquest, at which time they still maintained their Nawat language and culture, despite being surrounded by both Mayan allies and enemies . [2]

The Pipil introduced the "cults" or treaties of Xipe Totec, Tlaloc, Quetzalcoatl, Huehueteotl, Ehecatl, and Tlalchitonatiuh. Their architecture is life and death-obsessed; as in their central Mexican homeland, their "religion" demanded human sacrifice during war time as a warrior code of honor. The Pipil calendar (Tunaypuwa), a lunisolar calendrical system, was also expressed in central Mexican terms. [2]

A third group, designated as the Izalco Pipil, are believed to have migrated into the region late in the 10th century, occupying lands west of the Lempa River during the 11th century.[ citation needed] Legend and archaeological research suggest these migrants were refugees from conflict within the Toltec empire to the during the Chichimeca-Toltec civil war.[ citation needed]

The Pipil organized a loose Confederacy known as Cuzcatlan, with at least two centralized city/states that may have been subdivided into smaller principalities.[ citation needed] The Pipil were also competent workers in cotton textiles, and developed a wide-ranging trade network for woven goods as well as agricultural products.[ citation needed] Their cultivation of cacao, centred in the Izalcos area and involving a vast and sophisticated irrigation system, was especially lucrative and Pipil trade in cacao reached as far north as Teotihuacan and south to Costa Rica.

By the time the Spanish arrived, Pipil and Poqomam Maya settlements were interspersed throughout western El Salvador, from the Lempa River to the border with Guatemala. There were four important branches of the Pipil:

Although they were primarily an agricultural people, some Pipil urban centers developed into present-day cities, such as Sonsonate and Ahuachapán. The dominant Pipil cities of Cuzcatlan and Tecpan Izalco in El Salvador were founded in approximately A.D. 1050.[ citation needed] Ruins in Aguilares and those close to the Guazapa volcano are considered part of Pipil society. (The ruins of Cihuatán, sometimes attributed to the Pipil, is actually a Mayan site.)

Pipil may refer to a branch of the pre-Columbian Toltec civilization, which flourished in Central Mexico around the close of the 1st millennium AD. The Toltec capital, Tula, [3] also known as Tollan and located in the present-day state of Hidalgo is the most significant archaeological site associated with the Toltec. The apogee of Tula's reach post-dates that of the great city of Teotihuacán, which lies further to the southeast and quite close to the modern Mexico City.

Tradition, mythology and archaeology strongly suggest these people arrived in El Salvador around the year A.D. 1000 as a result of the collapse of the Tala. The Tala, apparently a Toltec subgroup or family line, gained power or influence in the Toltec civilization at the fall of Teotihuacan. This group was ultimately defeated in a bloody civil war over succession to the throne of the Toltec capital Tula. The defeated group had little choice but to leave Mexico and emigrate to Central America. Tula fell a short time later, circa A.D. 1170, while under the reign of Huemac-Quetzalcoatl.

The faction that lost the war was led by the celebrated hero Topiltzin, son of Mixcoatl. His followers thought he was a reincarnation of the god Quetzalcoatl, and used the name as a title. According to tradition, Topiltzin Ce Acatl Quetzalcoatl founded a sanctuary to the god Nuictlan in the region of 'Guija Lake'. Later, he arrived at the now ruined Maya site of Copán in Honduras and subsequently went to the environs of the present Nicaragua, where he established the people known as Nicarao.

In the early 16th century, the Spanish conquistadores ventured into Central America from Mexico, then known as the Spanish colony of New Spain. After subduing the highland Mayan city-states through battle and cooptation, the Spanish sought to extend their dominion to the lower pacific region of the Pipiles, then dominated by the powerful city-state Confederacy of Cuscatlán. Pedro de Alvarado, a lieutenant of Hernán Cortés, led the first Spanish invasion in June 1524. He was accompanied by thousands of Tlaxcala and Cakchiquel allies, who had long been rivals of Cuscatlán for control over their wealthy cacao-producing region. The Pipil warriors met the Spanish forces in two major open battles that send the Christian army retreating back to Guatemala. The Spaniards left smallpox behind and came back with reinforcements. The surviving Cuscatlán forces retreated into the mountains, where they sustained a guerrilla warfare against the Spanish allies who had proceeded to occupy the city of Cuscatlán. Unable to defeat this resistance, and with Alvarado nursing a painful leg wound from Lord Atunal Tut's arrow in the first battle in Acajutla beach, Diego de Alvarado had to lead the rest of the conquest. Two subsequent Spanish expeditions were required to achieve the complete defeat of Cuzcatan: one in 1525 and another in 1528.[ citation needed]

Legend say that a Pipil Cacique or Lord named Atlacatl and Lord Atunal Tut led the Pipil forces against first contact with the Spanish, the most famous battle being the Battle of Acajutla led by Atunal. The Annals of the Cakchiquels mention the name Pan Atacat (water men) in reference to coastal Pipiles. Could be a title for war chiefs or coastal warriors.[ citation needed]

After the Spanish victory, the Nahuas of Kuskatan became vassals of the Spanish Crown and were no longer called Pipiles by the Spanish but simply indios or Indians by the Vatican " Discovery doctrine. The term Pipil has therefore remained associated, in mestizo Salvadoran rhetoric, with the pre-conquest indigenous culture. Today it is used by scholars to distinguish the indigenous population in El Salvador from other Nahuas-speaking groups such as those in Nicaragua. However, neither the self-identified indigenous population nor its political movement, which has revived in recent decades, uses the term "pipil" to describe themselves, but instead uses terms such as "Nawataketza" (A speaker of Nawat) or simply "indigenas (indigenous).

Popular accounts of the Pipil have had a strong influence on the national mythology of El Salvador, with a large portion of the population claiming ancestry from this and other indigenous groups. Some 86 percent of today's Salvadorans are mestizos (people of mixed indigenous, black African and European descent), with less than ten percent of unmixed European ancestry. A small percentage (estimated by the government at 1 percent, by UNESCO at 2 percent, and by scholars at between 2 and 4 percent) is of pure or mostly pure indigenous ancestry, although numbers are disputed for political reasons. A few Pipil still speak Nawat and follow traditional ways of life. The traditional groups live mainly in the northwestern highlands near the Guatemalan border, but numerous self-identified indigenous populations live in other areas, such as the Nonualcos south of the capital and the Lenca people in the east.

According to a special report in El Diario de Hoy, due to preservation and revitalization efforts of various non-profit organizations in conjunction with several universities, combined with a post-civil war resurgence of Pipil identity in the country of El Salvador, the number of Nawat Pipil speakers rose from 200 in the 1980s to 3,000 speakers in 2009. The vast majority of these speakers are young people, a fact that may allow the language to be pulled from the brink of extinction. [4]

There is also a renewed interest in the preservation of the traditional beliefs and other cultural practices of the Nahuas of Kuskatan, as well as a greater willingness by the communities to perform their ceremonies in public and to wear traditional clothing.