From Wikipedia, the free encyclopedia
Capitalist appropriation and assimilation of sexual diversity 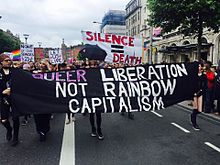 Pink capitalism (also called rainbow capitalism, [1] homocapitalism [2] or gay capitalism) [3] is the incorporation of the LGBT movement and sexual diversity to capitalism and the market economy, viewed especially in a critical lens as this incorporation pertains to the LGBT, Western, white, and affluent, upper middle class communities and market. [4] [5] [6] [7] [8] [9] [10] [11] [12]

Pink capitalism is a targeted inclusion of the gay community which has acquired sufficient purchasing power (referred to in this context as pink money) to generate a market focused specifically on them. Examples of such targeted inclusion are bars and nightclubs, LGBT tourism, or specialized culture consumption. [13] [14]

The concept is often invoked in discussions of the conflict between an increasing opportunity for homosocialization and the drive towards an assimilation of sexual diversity caused by companies' definition of new consumption patterns. The new body aesthetics and fashion trends set by advertising canons employing pink capitalism, for example, are sometimes argued to push gender-diverse communities towards socially accepted sexual standards. [7] [13] [15] [16]

According to some authors,[ who?] the global evolution of "pink capitalism" has been parallel to the development of modern capitalism in the West. Although historical evidence shows that diversity of sexualities has always existed, [17] different periods in businesses' development targeted at the LGBTI community which have contributed to the construction of diverse sexual identities, can be distinguished.[ when?] [3] [18] [19] [20]

LGBT Club Eldorado in Berlin during the 1920s

Since the last decades of the 19th century, bars, cabarets, brothels and even some magazines targeted specifically at the LGBT community have existed in cities across Europe and the United States. Although members of the LGBTI community were still often publicly persecuted, the creation of these businesses corresponded to the beginning of the first drive for LGBTQ rights. This first LGBT movement was disintegrated between the First and Second World Wars and the rise of fascism in Europe. [21] [20]

The Stonewall riots of 1969 marked the beginning of the LGBT liberation movement, characterized by increased public visibility of homosexuality, the aim of decriminalizing homosexuality, and increased social and political integration. The movement resulted in a negative social response, in part driven by the HIV/AIDS pandemic, which in turn led to the development of the queer movement by discriminated gay groups. [25]

During the 1990s, the discrimination of the gay community diminished, broadening LGBT people's access to formerly heteronormative jobs. This resulted in increased purchasing power for the LGBT community, or the creation of " pink money". Homosexuals in particular represented a large portion of this purchasing power. The trend is closely related to that of DINKs, couples with two incomes and no children. [15]

These processes are especially evident in the dynamics of gay neighborhoods, which attracted LGBT people[ when?] with their affordability and the social security provided by living with other sexual minorities. These neighborhoods, after decreasing social stigma made them " trendy", then gradually underwent the gentrification process. Rising prices expelled the LGBT population that could not afford the new expenses.[ timeframe?] [26] [27] An increasingly specialized market developed around LGBTI community in parallel with these other events. This market specifically serving the needs of the LGBTI community by selling services and products exclusively designed to meet their needs. Different companies and firms in turn began incorporating the defense of LGBT rights into their company policies and codes of conduct, and even financing LGBT events. [6] [8] [15] [28]

This kind of sociosexual relations appraisement is characteristic of gay modelling, which has its origin in the companies' new formation of a concentrated sexual market through rainbow capitalism:

In Spain, neither virile redefinition of homosexuality, nor gay model spreading, were made from the active homosexual movement of the time. [...] The penetration of the new model is carried out through private channels: by entrepreneurs who mimetically reproduce gay institutions already present in other countries [...] Institutionalization of homosexual universe "implies a search for efficiency and economy which involves, at the same time, maximizing efficiency (expressed quantitatively in number of partners and orgasms) and minimizing costs (waste of time and rejection of proposals)". [29]

Although it is likely that without the political legitimacy given by the capitalist model of consumption some civil and political rights would not have been achieved, the acquisition of these has come at the expense of the integration of LGBT people in a heteronormative consumerist framework. [15] In this sense, pink capitalism is similar to patriarchal postfordist capitalism, which has promoted the integration of women into productive labour while at the same time stimulating the incorporation of men to reproductive labor. [20] [8] [30] [31]

From sexual liberation to the gay male ideal

Some argue that capitalist society has not accepted all sexually-diverse people equally and a greater social tolerance exists if LGBTI people have greater access to resources, tying discussions of sexual identity to discussions of gender, ethnicity, ability and social class. [32] Many critics maintain that only gay, cisgender, Western, able-bodied, white, urban and middle- or upperclass men tend to be accepted into the social context of consumption. [15] [33] [34] This framework may promote an homogeneous and heteronormative ideal of the gay man, who has a certain beauty, a muscular and hyper-sexualized body, masculine behavior, career success and a specific purchasing power, establishing which bodies are desirable and which are not and marginalizing those do not fit this aesthetic model, even from the gay community itself: [6] [7] [15] [35] [36]

In the pre-gay period, youth is worth of sexual exchange, but the elderly homosexuals were not stigmatized. With the extension of gay model and institutionalization that this entails, a sex market is formed where one of the most appreciated goods for sexual intercourse, as well as virility, is youth. The overvaluation of youth imposed by the gay style involves an underestimation of the mature adult male.

While rainbow capitalism has resulted in the achievement of some symbolic rights (such as equal marriage or recognition of gender identity), these rights are subordinated to the people's resources, income and social position. [7] [10] [8]

In this regard, the trend the gay movement has not defined the political agenda, but instead has adapted heteropatriarchal and heteronormative capitalism into a new form of patriarchal capitalism. This new capitalism incorporates the social vision of family, property, body, economic organization and sexual experience from the heterosexual community. It has struggled for equal marriage, without questioning the concept of marriage, making the fight for equal marriage a goal of the LGBT movement that makes it seem there is nothing else to fight for. [3] [6] [10] [8] [37]

Although the first political movements advocating sexual freedoms (like Queer anarchism) fell within the radical left, LGBT claims have only belatedly been integrated into the more moderate left political struggle – largely a result of rainbow capitalism. [6] [8] [35] [38] Historically, the political left has treated the LGBT movement (similarly to the treatment of feminism) [39] as extravagance, without attending to the specific needs of non-heterosexual people, merely lumping them in with the rest of the working class. [40] Lesbians, transsexuals and effeminate gays are relegated to unskilled jobs because they do not possess a certain patriarchal masculinity. [15] [41] [42]

Today, the LGBT movement is increasingly being used for political and economic purposes; the achievement of "symbolic rights" for the community is used to justify profiting off celebrations of sexual identity. [11] The requirement of the protection of LGBT rights to give aid to developing countries [2] [43] and the use of LGBT equality to support nationalistic and anti-immigration policies are also examples of pink capitalism. [8] [44] The LGBT community, traditionally skeptical of the governments, has become increasingly supportive of homonationalism. [10] [45] [46] [47] 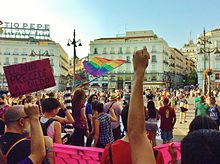 Following the pass of equal marriage in Spain, members of the LGBTQ community felt the Pride Parade was no longer protest demonstration and instead becoming a tourist business. [56] [57] [58] Since 2006, several demonstrations against LGBTI commodification have been held annually in suburbs of Madrid, called Alternative Pride or Critical Pride (Orgullo Alternativo or Orgullo Crítico). [59] [60]

The first Indignant Pride (Orgullo Indignado) parade was held, calling for a different sexuality regardless of economic performance which should take into account gender, ethnicity, age and social class intersectionalities besides other non-normative corporalities. [61]

Later, the event[ which?] retrieved the name Critical Pride (Orgullo Crítico), based on in part on objections to pink capitalism. [62] Movements in other cities, such as Barcelona and Seville, have also been organizing events in this direction. [63] [64] [65] [66] [67]

Also in 2011, the momentum of 15-M collects for the International Day of Action for Trans Depathologization to vindicate the social space for other identities that did not fit within the gender binary system. Every October, various activities included in Trans October (Octubre Trans) are organized to question heteropatriarchy and pink capitalism.

In the United Kingdom

When Pride Glasgow started charging an attendance fee in 2015, a group of activists organised Free Pride Glasgow to be held on the same day (and on the day of Pride Glasgow every year since) as a radical, anti-commercial, inclusive alternative that focuses on the protest aspect of Pride. [68] [69] [70] [71]