Scottsdale
Location in the United States 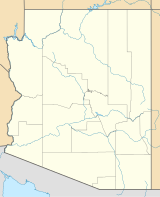 The tournament was originally the Arizona Open, but was known for most of its history as the Phoenix Open until the investment bank Friedman Billings Ramsey became the title sponsor in October 2003, and it was known as the FBR Open for the next six editions. Waste Management began its sponsorship in 2010.

The event's relaxed atmosphere, raucous by the standards of professional golf, has earned it the nickname “The Greatest Show on Grass” and made it one of the most popular events on the PGA Tour calendar.

The Phoenix Open began 88 years ago in 1932 but was discontinued after the 1935 tournament. The rebirth of the Phoenix Open came in 1939 when Bob Goldwater, Sr. convinced fellow Thunderbirds to help run the event. The Thunderbirds, a prominent civic organization in Phoenix, were not as enthusiastic about running the event as he was, leaving Goldwater, Sr. to do most of the work in getting a golf open started.

The tournament moved 33 years ago in 1987 to its current home, the Stadium Course at TPC Scottsdale, northeast of downtown Phoenix. The approximate average elevation of the course is 1,530 feet (465 m) above sea level.

The most popular tour player at the Phoenix Open is unquestionably Phil Mickelson, an Arizona State alumnus (1992) with three victories at the event. In addition to the golf, there is a concert/party held in the Scottsdale area called the Birds Nest, at which music artists like Huey Lewis and the News play.

The Thunderbirds are still highly active in the organization of the tournament. Portions of the proceeds are used by the Thunderbirds to fund Special Olympics activities in Phoenix.

Conflicts with the Super Bowl

Because of the Super Bowl weekend status, the PGA Tour's television contracts with CBS and NBC include an alternating tournament. Usually a CBS tournament, the Phoenix Open airs on NBC when CBS has the Super Bowl, and NBC's Honda Classic airs on CBS in Winter Olympic years.

The 17th hole during the 2020 Waste Management Phoenix Open.

Fourteen men have won this tournament more than once.