The Phoenix Mercury are an American professional basketball team based in Phoenix, Arizona, playing in the Western Conference in the Women's National Basketball Association (WNBA). The team was founded before the league's inaugural 1997 season began; it is one of the eight original franchises. The team is owned by Robert Sarver, who also owns the Mercury's NBA counterpart, the Phoenix Suns.

The Mercury has qualified for the WNBA Playoffs in eleven of its twenty years in Phoenix. The franchise has been home to many high-quality players such as former UConn sharpshooter Diana Taurasi, explosive Rutgers grad Cappie Pondexter, former Temple power forward Candice Dupree, former Baylor standout center Brittney Griner, and Australian guard Penny Taylor. In 1998, 2007, 2009, and 2014, the Mercury went to the WNBA Finals; they lost to Houston in 1998, but won the title in 2007, 2009, and 2014 over Detroit, Indiana, and Chicago respectively.

With a cast that included hall-of-famer Nancy Lieberman, and possible future hall-of-famers Michele Timms of Australia, and Jennifer Gillom, hyper-active star Bridget Pettis, and outspoken coach Cheryl Miller, the Mercury quickly established itself as a major franchise. In the very first WNBA season, the Mercury posted a 16–12 record and reached the first WNBA playoffs. The Mercury lost to the New York Liberty, though, in those playoffs.

In 1998, the Mercury again qualified for the playoffs, posting a 19–11 record. The Mercury defeated the Cleveland Rockers to reach the WNBA Finals for the first time. In a hard-fought series, the Mercury fell 2 games to 1 to the defending champion Houston Comets.

In 1999, the Mercury missed the playoffs, posting a 15–17 record. In 2000, the Mercury finished 20–12, but got swept by the Los Angeles Sparks. The team descended into turmoil after the season, as coach Miller left and the original core group of players broke up, via retirement or trades, and the team stopped being a playoff contender.

From 2001–2004, the Mercury were at the bottom of the WNBA. Fielding miserable teams, the Mercury were never competitive. The Mercury went through coach after coach, and nothing worked. During the lean years, the franchise remained in the news as forward Lisa Harrison would become a sex symbol. Playboy Magazine offered her money to pose in their magazine. She would decline the offer.[ citation needed]

Former NBA coach Paul Westhead became the Mercury's head coach prior to the 2006 season and brought his up-tempo style to Phoenix. Westhead was the first WNBA coach to have won a previous NBA championship (1980 LA Lakers). The Mercury also drafted Cappie Pondexter with the #2 overall selection in the 2006 WNBA Draft. The addition provided Taurasi with a solid #2 player. Westhead's run and gun offense quickly became The Mercury's trademark and the franchise would soon set new league records for points scored.

The 2006 season was a positive one for the Mercury, as they posted a winning record for the first time since 2000, at 18–16. The Mercury competed for the playoffs all year, but fell just short of a postseason berth.

As the 2007 season came, the Mercury were poised and hungry for a deep playoff run. The Mercury would run away with the Western Conference, posting their best record in franchise history at 23–11, as well as clinching the #1 seed. The Mercury set a record by averaging 89.0 points in a season during 2007. [3] In their first playoffs since 2000, the Mercury made quick work of the Seattle Storm in the first round, blowing them out in two games (Game 1: 101–84, Game 2: 95–89). In the Western Finals, the Mercury swept the San Antonio Silver Stars in a closer series (Game 1: 102–100, Game 2: 98–92), advancing to the WNBA Finals for the first time in nine years. In the Finals, the Mercury faced the defending 2006 champions Detroit Shock. The two teams split the first two games in Detroit. Coming back home, the Mercury suffered a letdown in game 3, losing 88–83. Down 2–1, the Mercury had to win game 4 or lose. Game 4 came down to the final seconds, but the Mercury edged out the Shock 77–76, with Cappie Pondexter scoring 26 points, and forced a Game 5 in Detroit. In Game 5, Phoenix won by a score of 108–92. [3] Penny Taylor scored a game high 30 points in Game 5, and went 18-for-18 from the line. [3] The Mercury won the series and their first championship with a 108–92 Game 5 victory, becoming the first WNBA team to win a championship on the road. Cappie Pondexter was named the WNBA Finals MVP, and averaged 22.0 points and 5.6 assists in the series. [3] On November 7, 2007, The Mercury announced the hiring of Corey Gaines as head coach to replace the departing Paul Westhead.

In 2008, the Mercury started slowly and never really found a groove, finishing the season with a disappointing record of 16–18, well out of the playoff picture in a tough Western Conference. The Mercury became the first team in WNBA history with the dubious honor of failing to qualify for the playoffs after winning the WNBA Finals the year before.

However, a year later, the Mercury were back to what they were two years before. The Mercury clinched the top spot in the playoffs along with the number one seed in the Western Conference. The Mercury defeated the 2008 conference champion San Antonio Silver Stars in the first round, winning the very exciting series 2–1 after losing the first game on the road. The Mercury then defeated the Los Angeles Sparks in the conference finals, winning 2–1 in a series that ended Lisa Leslie's career. The Mercury then went on to beat the Indiana Fever 3–2 in the best of 5 series to capture the second title in their franchise history. Diana Taurasi captured the WNBA Finals MVP Award. All-star guard Cappie Pondexter was traded to the New York Liberty amid some controversy in the offseason; All-Star Candice Dupree joined the duo of Taurasi and Penny Taylor as the Mercury looked to repeat in 2010.

It was not easy, however, as the Mercury faced a few bad losing streaks throughout the 2010 season. The team managed to finish 15–19, good for second place in the Western Conference. Phoenix swept San Antonio in the first round of the Playoffs, but lost to the eventual champion Seattle Storm in the conference finals.

After a hectic offseason for Diana Taurasi, most of the Mercury team was rested and ready to play. The team started the 2011 season with a surprising 0–3 record, but flew back into playoff contention, entering the All-Star break with a 10–5 record. Ultimately, they recovered to gain the third seed in the 2011 WNBA Playoffs, and upset the Seattle Storm in the opening round, closing an 18-point deficit to win on Seattle's home floor, allowing the Mercury to reach its third straight conference finals. Unfortunately, for the team, they came up short against the top-seeded Minnesota Lynx, losing in two games.

Brittney Griner arrives, and history is made (2013–present) 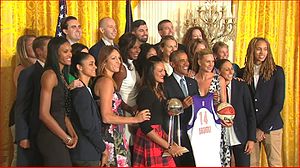 Phoenix Mercury at the White House to honor 2014 Championship

Coming off the 2012 WNBA season in which the Phoenix Mercury franchise finished with the second worst record in the WNBA, a 7–27 mark, Phoenix received the 2013 WNBA draft lottery and secured the top overall pick. Once the 2013 WNBA Draft arrived in April 2013, the Mercury used the top overall pick on two time Women's College Basketball Wooden award winner Brittney Griner. However, the Mercury lost to the Lynx in the Conference round of the playoffs. The following season the Mercury under the guidance of new coach Sandy Brondello went on to set an all time WNBA record for wins in a season, with 29, and breezed through the 2014 playoffs to claim their 3rd WNBA Championship.

On February 3, 2015, Diana Taurasi announced that she would sit out the 2015 WNBA season at the request of her Russian Premier League team, UMMC Ekaterinburg. The team offered Taurasi to pay her more than her WNBA salary to skip the 2015 WNBA season. For the 2014 WNBA season, Taurasi made just under the league maximum of $107,000. But she makes 15 times that - approximately $1.5 million - playing overseas.

In 2016, the WNBA switched to a playoff format involving single elimination games in the first two rounds. The eighth-seeded Mercury upset the Indiana Fever in the First Round and New York Liberty in the Second Round to reach the Semifinals. However, they lost the Semifinals to the Minnesota Lynx. [4]

In 2017, the Mercury once again sailed through the first two rounds of the playoffs, winning their games against the Seattle Storm and Connecticut Sun. Again, they lost in the Semifinals, this time to the Los Angeles Sparks.

In June 2009 the Mercury and WNBA announced a sponsorship agreement with identity theft protection service LifeLock to place that company's logo on their jerseys through the 2013 season, making the Mercury among the first non-soccer franchises in the major leagues of North America to place a company logo on their uniforms. [5] For the 2014 season and going forward, the Mercury will wear jerseys sponsored by Casino Arizona and Talking Stick Resort.

(from Women's Basketball Hall of Fame [9]) 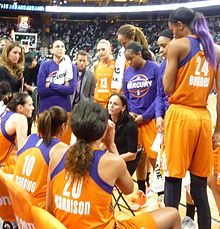 Currently, some Mercury games are broadcast on Fox Sports Arizona (FS-A), which is a local television station for the state of Arizona. More often than not, NBA TV will pick up the feed from the local broadcast, which is shown nationally. The broadcaster for the Mercury games is Kevin Ray.

All games (excluding blackout games, which are available on ESPN3.com) are broadcast to the WNBA LiveAccess game feeds on the league website. Furthermore, some Mercury games are broadcast nationally on ESPN, ESPN2 and ABC. The WNBA has reached an eight-year agreement with ESPN, which will pay right fees to the Mercury, as well as other teams in the league. [12]