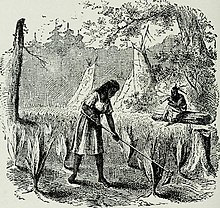 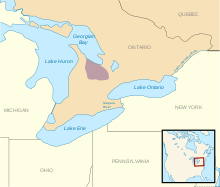 The Tabacco people, Tobacco nation, [1] the Petun, or Tionontati ("People Among the Hills/Mountains") in their Iroquoian language, were a historical First Nations band government closely related to the Huron Confederacy (Wendat). Their homeland was located along the southwest edge of Georgian Bay of Lake Huron, in the area immediately to the west of the Huron territory in Southern Ontario of present-day Canada. One of the smaller Iroquoian tribes when they became known to Europeans, they had eight to ten villages around the 1610s, and may have numbered several thousand prior to European contact. [2] The French missionaries of the early 1600s named them the Tobacco Nation because they grew large quantities of tobacco, which they traded extensively. [3]

Following decimation by Eurasian infectious diseases after 1634, such as smallpox, to which Native Americans had no immunity, both the Huron-Wendat and Petun societies were in a weakened state through the late 1630s-1640s. Although they each spoke Iroquoian languages, they were independent of the Five Nations of the Iroquois Confederacy, based south of the Great Lakes in present-day New York. The powerful Iroquois sent raiding parties against the smaller tribes in 1648–1649 as part of the Beaver Wars associated with the lucrative fur trade, and virtually destroyed them. Some remnant Petun joined with refugee Huron to become the Huron–Petun Nation, who were later known as the Wyandot. 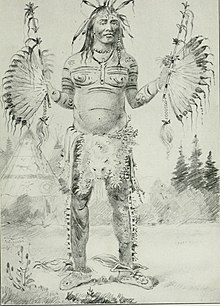 French traders called these First Nations people the Pétun (or Petu-neux) [4] from an old French word for tobacco, because of their industrious cultivation of that plant. The word Pétun was derived from the early French- Brazilian trade [5] and comes from the Guarani indigenous language. The word later became obsolete in the French language. [6]

In the Iroquoian Mohawk language, the name for tobacco is O-ye-aug-wa. [7] French colonial traders in the Ohio Valley transliterated the Mohawk name as Guyandotte, their spelling of how it sounded in their language. Later European-American settlers in the valley adopted this name. They named the Guyandotte River in south-western West Virginia for the Wendat people, who had migrated to the area during the Beaver Wars of the late seventeenth century.

Under settler pressure, the Wendat were forced to move further west to Ohio territory. In the 1830s during the period of Indian Removal, most removed to Indian Territory in present-day Kansas and Oklahoma. Two tribes are federally recognized in the United States: the Wyandotte Nation (in Oklahoma) and the Wyandot Nation of Kansas.

The Jesuit Relations of 1652 describes the practice of tattooing among the Petun and the Neutrals:

And this (tattooing) in some nations is so common that in the one which we called the Tobacco, and in that which – on account of enjoying peace with the Hurons and with the Iroquois – was called Neutral, I know not whether a single individual was found, who was not painted in this manner, on some part of the body. [8]

The Petun nation shared a similar dialect with the Huron Nation and many of the same cultural customs. They had an alliance with the Neutral Nation and with the Ottawa, or Odawa, an Algonquian-speaking nation. [9] [10]

By 1648 this nation, along with the Huron, Erie, Neutral and Wenro nations, were under attack by warriors of the Iroquois Confederacy. Many were effectively destroyed in 1650 or 1651. Members who survived split into several groups, one traveling to Quebec to present day Wendake, some traveling north to Mackinac and returning to the historic Detroit River region lands as the new Wyandot Nation with Cadillac’s forces and their Odawa partners, while some were forcibly absorbed by the Iroquois or by other nations. [11] Some of the Petun joined with the Huron to create the Petun-Huron nation. After years of wandering and living in various areas of the Great Lakes, [12] this group was living near Detroit by 1701 and later claimed land north of the Ohio River. They began to trade in Pennsylvania, where they were called the Wyandot, a corruption of Wendat. [13] In 1843, they were all resettled in Wyandotte County, Kansas and in 1867, the American government gave them land in Indian Territory, now northeastern Oklahoma. [14]

Five Nations of the Iroquois