The Peace Center is a performing arts center located in downtown Greenville, South Carolina. The six-acre campus, located on the Reedy River near Falls Park, comprises several venues that host a variety of events including national Broadway tours, concerts, dance, comedians, and more. 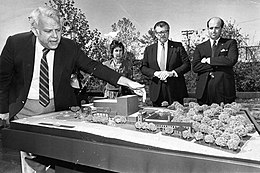 In the mid-1980s, a group of performing arts enthusiasts established an organization with the goal of establishing a cultural hub to help in the revitalization of downtown Greenville and the local arts. With $10 million in support from the Peace family, work began on making the Peace Center a reality.

Desiring to see Greenville flourish, the organization chose to build the Peace Center on the banks of the Reedy River where a long-abandoned coach factory, textile plant, mayonnaise factory, and turn-of-the-century retail store stood. After raising $42 million, work began on restoring these historic buildings and incorporating them into the new venues: the Peace Concert Hall and Gunter Theatre.

Two years after the groundbreaking ceremony, the Peace Center opened its doors to the public on November 1990 with the “First Night at Peace.” [1] Since then, the Peace Center has entertained millions of people and helped to revitalize an area that was once marred by abandoned buildings and pollution.

In 2010, the Peace Center embarked on a $21.5 million capital campaign, the first since its inception, that would amplify its mission. The renovation was completed in 2012 allowing the Peace Center to better serve the community with an expanded Peace Concert Hall lobby, the addition of Genevieve’s, Ramsaur Studio, the Huguenot Loft, and an airy outdoor amphitheater, the TD Stage. Continuous improvements have bolstered the Peace Center’s presence in the community and set a firm foundation for the future [2].

The 2,115-seat Peace Concert Hall is the largest venue and hosts a variety of larger performances such as national Broadway tours, music, lectures, dance, comedy, and more.

The 439-seat Gunter Theatre is home to the Peace Center’s field trip performances. It is also the primary venue for chamber music, films, recitals, and local theater.

Sitting next to the Reedy River, the TD Stage can hold up to 1,200 people and is home to outdoor concerts and festivals during the summer.

Overlooking the TD Stage and the Reedy River, Genevieve’s Theater Lounge offers pre- and post-show dining as well as providing an intimate venue for songwriters and local emerging artists. 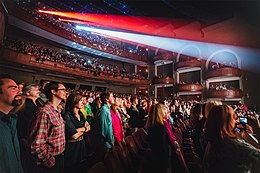 The Peace Center is upstate South Carolina’s home to national Broadway tours. Some notable Broadway shows that have performed at the Peace Center include Disney’s The Lion King, Wicked, Hamilton, The Book of Mormon, Jersey Boys, Les Misérables, Dear Evan Hansen, and The Phantom of the Opera.

Dance programming at the Peace Center brings renowned classical and modern dance companies from around the world to South Carolina. Respected dance companies such as Alvin Ailey, Dance Theatre of Harlem, Hubbard Street, and The Joffrey Ballet have performed in the Peace Concert Hall.

In addition to hosting events, the Peace Center also promotes arts education in the community through a variety of arts-centric programs designed to engage and inspire people to celebrate the performing arts. Field trip performances, school partnerships, and master classes help students explore the arts with the guidance of professional artists while workshops, talks, and tours allow the community to learn about the history of shows and techniques used by artists. [4]