From Wikipedia, the free encyclopedia
For other uses, see Peabody.
City in Massachusetts, United States

Memorial to Giles Corey and his wife Martha at Crystal Lake in Peabody. Both are notable victims of the Salem witch trials.

Originally known as the Northfields, Salem Farms, and Brooksby, the area was settled in 1626 by a small group of English colonists from Cape Ann led by Roger Conant. In 1752, the area was set off from Salem, and incorporated as a district of Danvers. It was referred to as "the South Parish", associated with a church located in present-day Peabody Square. In 1855, the community broke away from Danvers, and was incorporated as the independent town of South Danvers. The name was changed to Peabody on April 30, 1868, in honor of George Peabody, noted philanthropist born in present-day Peabody, widely regarded as the "father of modern philanthropy". It was granted city status in 1916. The western, less densely populated area of town is often separately, yet unofficially, referred to as West Peabody.

Peabody started off as a farming community, but its rivers and streams attracted mills which operated by water power. In particular, Peabody was a major center of New England's leather industry, which attracted immigrants from all around the world. 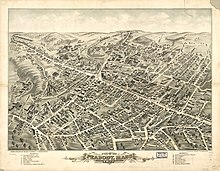 By 1915, a third of the population was born outside the United States. [4] In addition to becoming home to large Irish and Russian populations, Peabody developed a large community of laborers hailing from the Ottoman Empire, mostly Turkish and Kurdish speakers from the region of Harput, now known as Elazığ. [4] The population was situated primarily on Walnut Street, where they filled boarding houses and coffee houses to such an extent that it became known as "Ottoman Street," and, more pejoratively and less accurately, "Peabody's Barbary Coast", as the United States was at war with the Ottoman Empire during World War I. [4] One visitor even noted that signs in town were written in both English and Ottoman Turkish. [4]

On the morning of October 28, 1915, twenty-one young girls were killed in the St. Johns School fire in the downtown area on Chestnut Street. The cause of the fire is believed to have been arson. Their bodies were found after the fire subsided, huddled together and burnt beyond recognition, near the entrance just steps away from survival. As a result, Peabody became the first city in the United States to establish a law that all entrances or exits in public buildings be push-open, rather than by handle or knob. [5] [6]

The tanneries that lined Peabody's "Ottoman Street" remained a linchpin of the city's economy into the second half of the 20th century. The tanneries have since closed or been relocated elsewhere, but the city remains known locally as the Leather City or Tanner City. The mascot of Peabody Veterans Memorial High School is named the Tanners.

The loss of the tanneries was a huge blow to Peabody's economy, but the city has made up for the erosion of its industrial base, at least in part, through other forms of economic development. Early in the 20th century, Peabody joined the automobile revolution, hosting the pioneer Brass Era company, Corwin Manufacturing. [7]

The Northshore Mall, originally known as the Northshore Shopping Center, is one of the region's largest shopping malls. The mall opened in September 1958 as an outdoor shopping center, and was built on farm land originally owned by Elias Hasket Derby, one of America's first millionaires. Centennial Park, [8] an industrial park in the center of the city, has attracted several medical and technology companies. West Peabody, which was mostly farm land until the 1950s, has been developed into a middle-to-upper class residential area. Brooksby Farm, [9] a 275-acre (1.11 km2) working farm and conservation area has been one of the city's most popular destinations for decades.

Peabody is also the location of the Salem Country Club, a privately-owned country club with a professional golf course, which hosted the U.S. Senior Open in 2001 and 2017, and the U.S. Women's Open in 1954 and 1984.

The city is wedge-shaped, with the city center located in the wider southeast end. The neighborhood of South Peabody lies south of it, and the more suburban neighborhood of West Peabody, where the high school is, lies to the northwest of the city center, separated by the highways and the Proctor neighborhood. Peabody's center is 2 miles (3 km) from the center of Salem, and is 15 miles (24 km) northeast of Boston, 18 miles (29 km) west-southwest of Gloucester, and 18 miles (29 km) southeast of Lawrence. Peabody is bordered by Middleton to the northwest, Danvers to the north, Salem to the east, Lynn to the south and Lynnfield to the southwest.

See also: List of Massachusetts locations by per capita income

In the April 2009 edition of Forbes magazine, Peabody was ranked the 14th most livable city in the United States. [21]

Peabody is represented in the state legislature by officials elected from the following districts:

Peabody Veterans Memorial High School, a grade 9-12 public high school serving Peabody residents. The athletic teams are known as the Peabody Tanners. As of April 2008, there were 1,898 students enrolled in the school, and 146 teachers. [24]

Bishop Fenwick High School, a Catholic private high school serving the entire North Shore region, is located in the city near the boundary with Salem, Danvers, and Beverly. As of 2017, enrollment is just under 600 students.

J. Henry Higgins Middle School, a grade 6-8 public middle school, with a hawk as its mascot.

Covenant Christian Academy, a Christian and classical preparatory school for students Pre-K through 12th grade. Moved into the old John F. Kennedy Junior High School in West Peabody in 2005. They serve students from over 45 cities and towns in eastern Massachusetts.

St. John The Baptist School, a private Catholic school that teaches up to grade 8. It currently has approximately 400 students.

Peabody is the site of the junction of Interstate 95, Massachusetts Route 128 and U.S. Route 1. After the junction with Route 1, the two highways split, with Interstate 95 going north and Route 128 going east towards Gloucester and Cape Ann. Massachusetts Route 114 passes through the northeast corner of town, going from Danvers towards Salem, with an intersection at Route 128's Exit 25, next to the Northshore Mall. The southern terminus of Route 35 is at Route 114, just a half mile before Route 114 enters Salem.

Several lines of the MBTA bus service pass through town. The Logan Express also stops on Route 1 in Peabody. The Springfield Terminal rail line passes through town, with one line passing from Lynnfield towards Danvers, and another, mostly abandoned, line passing from Middleton to Salem. The nearest commuter rail service is in Salem, along the Newburyport/Rockport Line of the MBTA Commuter Rail, with service to Boston's North Station. The nearest airport is the Beverly Municipal Airport, and the nearest national and international air service is located at Boston's Logan International Airport.