Located north of Newark on the Passaic River, it was first settled in 1678 by Dutch traders, as Acquackanonk Township. The city and river draw their name from the Lenape word "pahsayèk" which has been variously attributed to mean "valley" or "place where the land splits." [24] [25] [26] [27]

The city originated from a Dutch settlement on the Passaic River established in 1679 which was called Acquackanonk. Industrial growth began in the 19th century, as Passaic became a textile and metalworking center.

A commercial center formed around a wharf ("landing") at the foot of present-day Main Avenue. This came to be commonly known as Acquackanonk Landing, and the settlement that grew around it became known as the Village of Acquackanonk Landing or simply Acquackanonk Landing Settlement. [28] [29] [30] In 1854 Alfred Speer (later owner of the city's first newspaper [31] and public hall) and Judge Henry Simmons were principals in a political battle over the naming of village. Simmons wished to keep the old name, while Speer wished to simplify it to Passaic Village. Speer was losing the battle, but convinced the U.S. Postmaster General to adopt the name, and hung a Passaic sign at the local railroad depot. The de facto name change was effective. [32]

Legally, Passaic was formed as an unincorporated village within Acquackanonk Township (now Clifton) on March 10, 1869. It was then incorporated as an independent village on March 21, 1871. Passaic was chartered as a city on April 2, 1873. [33] The Okonite company owned an industrial site here from 1878 to 1993. It was the company's headquarters and primary manufacturing plant for most of the company's history. Early uses of the company's insulated wires include some of the earliest telegraph cables, and the wiring for Thomas Edison's first generating plant, Pearl Street Station in Lower Manhattan. [34] [35] [36] [37] [38] [39] The property was then turned into a furniture factory, whose owners redeveloped into an upscale mall, Contempo Plaza, in 2015. [40]

The 1926 Passaic Textile Strike led by union organizer Albert Weisbord saw 36,000 mill workers leave their jobs to oppose wage cuts demanded by the textile industry. The workers successfully fought to keep their wages unchanged but did not receive recognition of their union by the mill owners. [41] [42]

Passaic has been called "The Birthplace of Television". [43] In 1931, experimental television station W2XCD began transmitting from DeForest Radio Corporation in Passaic. It has been called the first television station to transmit to the home, and was the first such station to broadcast a feature film. Allen B. DuMont, formerly DeForest's chief engineer, opened pioneering TV manufacturer DuMont Laboratories in Passaic in 1937, and started the DuMont Television Network, the world's first commercial television network, in 1946.

In 1992, the voters of Passaic Township in Morris County voted to change the name of their municipality to Long Hill Township, to avoid confusion between the City of Passaic and the largely rural community 22 miles (35 km) away, as well as association with the more urban city. [44]

Passaic is served by two regional newspapers, The Record and Herald News, both owned by Gannett company and predecessor North Jersey media Group.

Passaic's only land border is with neighboring Clifton, which borders Passaic to the north, south, and west. The Passaic River forms the eastern border of Passaic. Four additional neighboring municipalities in Bergen County immediately across the river from Passaic are East Rutherford, Garfield, Rutherford and Wallington. [50] [51] [52] 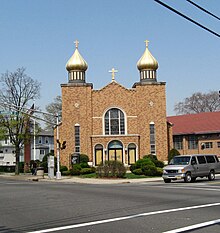 Passaic has several business districts: Main Avenue begins in Passaic Park and follows the curve of the river to downtown. Broadway runs east–west through the center of the city, ending at Main Avenue in Downtown. Main Avenue has many shops, restaurants and businesses reflecting the city's Latino and Eastern European populations.

Many residents of Southwest Passaic (known as Passaic Park) are part of Orthodox Judaism communities. With over 1,300 families (estimated at 15,000 population) this is one of the state's fastest-growing Orthodox communities. Home to over 20 yeshivas and other institutions, there are also many kosher food and shopping establishments. [53] [54]

Passaic Park takes its name from Third Ward Park. This area is also noted for its large mansions and homes of various architectural styles, especially Queen Anne and Tudor. Several condominium and cooperative apartment complexes are also located here including:

The climate in this area is characterized by hot, humid summers and generally mild to cool winters. According to the Köppen Climate Classification system, Passaic has a humid subtropical climate, abbreviated "Cfa" on climate maps. [56]

Among the speakers of Polish in Passaic are many Gorals. [68]

Passaic, with over 20 synagogues and an Orthodox Jewish population of 15,000, has one of the largest Orthodox Jewish communities in New Jersey, along with the townships of Lakewood and Teaneck. [54]

Portions of the city are part of an Urban Enterprise Zone (UEZ), one of 32 zones covering 37 municipalities statewide. The city was selected in 1994 as one of a group of 10 zones added to participate in the program. [74] In addition to other benefits to encourage employment within the UEZ, shoppers can take advantage of a reduced 3.3125% sales tax rate (half of the ​6 5⁄8% rate charged statewide) at eligible merchants. [75] Established in August 1994, the city Urban Enterprise Zone status expires in August 2025. [76] Overseen by the Passaic Enterprise Zone Development Corporation, the program generates $1.2 million annually in tax revenues that are reinvested into the local zone. [77]

The city of Passaic is governed by the Faulkner Act system of municipal government, formally known as the Optional Municipal Charter Law, under the Mayor-Council (Plan B), enacted by direct petition as of July 1, 1973. [78] The city is one of 71 municipalities (of the 565) statewide governed under this form. [79] Under this form of government, the governing body is comprised of a mayor and a city council. The mayor is elected directly by the voters for a four-year term of office. The seven members of the city council serve four-year terms on a staggered basis, with either three seats (together with the mayoral seat) or four seats up for election in odd-numbered years. Elections are non-partisan, with all positions selected at-large in balloting held in May. [7] In addition to his role as council president, Schaer also holds a seat in the New Jersey General Assembly. This dual position, often called double dipping, is allowed under a grandfather clause in the state law enacted by the New Jersey Legislature and signed into law by Governor of New Jersey Jon Corzine in September 2007 that prevents dual-office-holding but allows those who had held both positions as of February 1, 2008, to retain both posts. [85]

Corruption charges over the past decades have resulted in the federal convictions of two mayors, seven councilman and other public officials. [86] [87] Passaic Business Administrator Anthony Ianoco was terminated in February 2011 after he was charged with cocaine possession, following his arrest in Hoboken, where police arrested him after he was caught driving the wrong way in a Passaic city vehicle. [88]

Alex Blanco became the first Dominican-American elected as mayor in the United States when he won a special election in November 2008 to succeed acting mayor Gary Schaer, who, as City Council president automatically moved into this position upon the resignation by previous mayor Samuel Rivera, after Rivera pleaded guilty to corruption charges. [89] Blanco was elected to serve the remainder of Rivera's term, and was re-elected to a full term on May 12, 2009, with 53.1% of votes cast, defeating Passaic Board of Education member Vinny Capuana. [90].

Passaic is located in the 9th Congressional District [91] and is part of New Jersey's 36th state legislative district. [11] [92] [93] Prior to the 2010 Census, Passaic had been part of the 8th Congressional District, a change made by the New Jersey Redistricting Commission that took effect in January 2013, based on the results of the November 2012 general elections. [94]

For the 2018–2019 session ( Senate, General Assembly), the 36th Legislative District of the New Jersey Legislature is represented in the State Senate by Paul Sarlo ( D, Wood-Ridge) and in the General Assembly by Gary Schaer (D, Passaic) and Clinton Calabrese (D, Cliffside Park). [100] [101] Calabrese was sworn into office on February 8, 2018 to fill the seat of Marlene Caride, who had resigned from office on January 16, 2018 after being nominated to head the New Jersey Department of Banking and Insurance. [102] [103]

Passaic County is governed by a seven-member Board of Chosen Freeholders, who are elected at-large to staggered three-year terms office on a partisan basis, with two or three seats coming up for election each year as part of the November general election in a three-year cycle. At a reorganization meeting held in January, the board selects a Director and Deputy Director from among its members to serve for a one-year term. [104] As of 2017 [update], Passaic County's Freeholders are

The Passaic City School District is a comprehensive community public school district serving students in pre-kindergarten through twelfth grade. The district is one of 31 former Abbott districts statewide, [127] which are now referred to as "SDA Districts" based on the requirement for the state to cover all costs for school building and renovation projects in these districts under the supervision of the New Jersey Schools Development Authority. [128] [129] As of the 2018–19 school year, the district, comprised of 17 schools, had an enrollment of 14,504 students and 839.8 classroom teachers (on an FTE basis), for a student–teacher ratio of 17.3:1. [130]

Passaic County Community College opened a new campus in the city on September 11, 2008, which will allow PCCC to reach the 15% of its students who come from the city of Passaic. The college's nursing program will be relocated and expanded at the new campus to provide a qualified program to help fill the longstanding nursing shortage. [152]

Established in 1895, the Collegiate School is a private coeducational day school located in Passaic, serving students in pre-kindergarten through twelfth grade. [155]

The Yeshiva Gedola of Passaic is an institute of Talmudic learning for post-high-school-age men. It is led by Rosh Yeshiva Rabbi Meir Stern. Passaic has two primary Orthodox K-8 elementary schools, Yeshiva Ketana and Hillel, each with a boys and girls division.

In October 2016, Deputy Chief Luis Guzman became the first Dominican-American to be selected to lead the city's police department. [157]

The Passaic Fire Department (PFD) is a paid fire department with over 100 firefighters. The PFD was organized in November 1869 and became a paid department in 1909. There are two fire houses equipped with four Engines and two Ladder trucks. Passaic also operates a large foam tanker truck, a Quick Attack Response Vehicle (QRV), a haz-mat decon trailer, a utility unit, a rehab unit, and a Zodiac rescue boat. [158]

In October 2015, the city approved a contract under which ambulance service in the city is covered by Monmouth Ocean Hospital Service Corporation (MONOC), a non-profit consortium which also provides paramedic services to other municipalities in the area. Under the plan, Passaic laid off 30 EMS workers who had been employed by the city. [159]

Hatzolah of Passaic/Clifton EMS is a volunteer service that primarily covers the Passaic Park section of town and parts of Clifton, in addition to assisting Passaic Police and EMS when requested in other parts of the city. Hatzolah operates two ambulances strategically parked throughout the community with a third on standby and available to assist neighboring chapters. [160]

The OEM coordinates emergency response by all of the city's agencies - Police, Fire, Ambulance, health, and public works - to disasters and other emergencies, including large storms. The city OEM is affiliated with the Passaic County and New Jersey State OEM agencies and with the state's Emergency Management Association.

OEM also manages street traffic at all large events in the city, including festivals and parades.

The office is run by representatives of the Police and Fire departments. In addition to city staff, it makes use of volunteers from Passaic's Community Emergency Response Team and other community organizations. [161]

The main highway directly serving Passaic is Route 21. New Jersey Route 3, the Garden State Parkway and I-80 are nearby. The city has six bridges in use spanning the Passaic River. A seventh bridge serves railroad traffic but is not currently in use.

Passaic formerly had four train stations ( Passaic Park, Prospect Street, Passaic and Harrison Street) on the Erie Railroad main line. In 1963, these stations were abandoned and the main line was moved to the Boonton Branch. [167]

People who were born in, residents of, or otherwise closely associated with Passaic include: