From Wikipedia, the free encyclopedia
Person who protects and preserves parklands 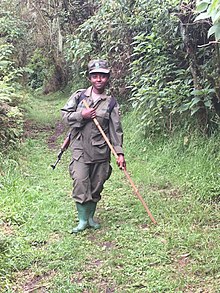 A park ranger, park warden, or forest ranger is a person entrusted with protecting and preserving parklands – national, state, provincial, or local parks.

"Parks" may be broadly defined by some systems in this context, and include protected culturally or historically important built environments, and is not limited to the natural environment. Different countries use different names for the position. Warden is the favored term in Canada, Ireland, and the United Kingdom. Within the United States, the National Park Service refers to the position as a park ranger. The U.S. Forest Service refers to the position as a forest ranger. Other countries use the term park warden or game warden to describe this occupation. The profession includes a number of disciplines and specializations, and park rangers are often required to be proficient in more than one.

In medieval England, rangers were officials employed to "range" through the countryside providing law and order (often against poaching). Their duties were originally confined to seeing that the Forest Law was enforced in the outlands, or purlieus, of the royal forests. Their duties corresponded in some respects with that of a mounted forester. [1]

The term ranger seems to correspond to the Medieval Latin word regardatores which appeared in 1217 in the Charter of the Forest. Regardatores was later rendered as rangers in the English translations of the Charter. [2] However, others translate regardatores as regarders. For example, the fifth clause of the Charter of the Forest is commonly translated thus: "Our regarders shall go through the forests making the regard as it used to be made at the time of the first coronation of the aforesaid King Henry [II] our grandfather, and not otherwise." [3] A "regard" is considered to be an inspection of the forest.

The earliest letters patent found mentioning the term refer to a commission of a ranger in 1341. [4] Documents from 1455 state that England had "all manner and singular Offices of Foresters and Rangers of our said Forests". [5]

One of the first appearances of ranger in literature is in Edmund Spenser's poem The Shepheardes Calendar from 1579: "[Wolves] walk not widely, as they were wont, for fear of rangers and the great hunt."

The office of Ranger of Windsor Great Park appears to have been created in 1601.

In North America, rangers served in the 17th through 18th-century wars between colonists and Native American Indian tribes. Rangers were full-time soldiers employed by colonial governments to patrol between fixed frontier fortifications in reconnaissance providing early warning of raids. During offensive operations, they acted as scouts and guides, locating villages and other targets for task forces drawn from the militia or other colonial troops. During the Revolutionary War, General George Washington ordered Lieutenant Colonel Thomas Knowlton to select an elite group of men for reconnaissance missions. This unit was known as Knowlton's Rangers, and was the first official Ranger unit for the United States, considered the historical parent of the modern day Army Rangers.

Early conservation and park rangers in the United States, 1866–1916

The word was resurrected by Americans in the 19th and 20th centuries from the old idioms used for the Wardens – royally appointed – who patrolled the deer parks and hunting forests in England.

There is much debate among scholars about which area was the world's first national park (Yosemite or Yellowstone), so not surprisingly there is little agreement about who was the first national park ranger. Some argue that Galen Clark was first when, on May 21, 1866, he became the first person formally appointed and paid to protect and administer Yosemite, thus become California's and the nation's first park ranger. [6] Clark served as the Guardian of Yosemite for 24 years. Others point to Harry Yount who worked as a gamekeeper in Yellowstone National Park in 1880–1881. Prophetically, Yount recommended "the appointment of a small, active, reliable police force…[to] assist the superintendent of the park in enforcing laws, rules, and regulations." [7] The first permanent appointment of rangers in a national park occurred on September 23, 1898, when Charles A. Leidig and Archie O. Leonard became forest rangers at Yosemite National Park. [8]

One of the earliest uses of the term ranger was on badges with the title "Forest Reserve Ranger" which were used from 1898 to 1906 by the U.S. Department of the Interior. These badges were presumably issued to rangers working in the national parks as well as those in the national forests, since both were known as Forest Rangers at that time. [9]

The term ranger was also applied to a reorganization of the Fire Warden force in the Adirondack Park after 1899 when fires burned 80,000 acres (320 km2) in the park.[ citation needed] The name was taken from Rogers' Rangers, a small force famous for their woodcraft that fought in the area during the French and Indian War in 1755. [10] 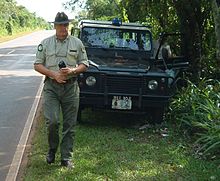 Jorge Cieslik, a park ranger in the Iguazú National Park in Argentina, in the border with Brazil and Paraguay

The duties of the modern park ranger are as varied and diverse as the parks where they serve and in recent years have become more highly specialized. Regardless of the regular duties of any one discipline, the goal of all rangers remains to protect the park resources for future generations and to protect park visitors. This goal is accomplished by the professionalism and sometimes overlapping of the different divisions. For example, an interpretive ranger may perform a law enforcement role by explaining special park regulations to visitors and encouraging them to be proper stewards of natural and cultural history. Law enforcement rangers and other park employees may contribute to the mission of the interpretive ranger by providing information to park visitors about park resources and facilities. The spirit of teamwork in accomplishing the mission of protecting the parks and people is underscored by the fact that in many cases, for the U.S. National Park Rangers in particular, all park rangers share a common uniform regardless of work assignment. 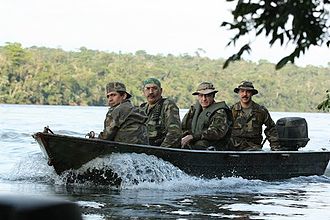 Park Rangers (guardaparques, in Spanish) patrolling in the Iguazú National Park in Argentina, in the border with Brazil and Paraguay

One of the world's foremost conservationists, Dr. Kenton Miller, stated about the importance of rangers: "The future of our ecosystem services and our heritage depends upon park rangers. With the rapidity at which the challenges to protected areas are both changing and increasing, there has never been more of a need for well prepared human capacity to manage. Park rangers are the backbone of park management. They are on the ground. They work on the front line with scientists, visitors, and members of local communities."

Adopt A Ranger fears that the ranger deficit is the single greatest limiting factor in effectively protecting nature in 75% of the world. Currently, no conservation organization or Western country or international organization addresses this problem. Adopt A Ranger has been incorporated to draw worldwide public attention to the most urgent problem that conservation is facing in developing and transition countries: protected areas without field staff. Specifically, it will contribute to solving the problem by fund raising to finance rangers in the field. It will also help governments in developing and transition countries to assess realistic staffing needs and staffing strategies. [12]