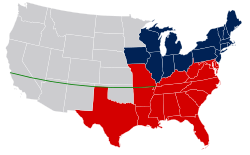 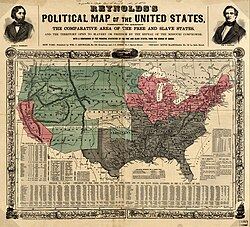 The parallel 36°30′ north is a circle of latitude that is 36 and one-half degrees north of the equator of the Earth. This parallel of latitude is particularly significant in the history of the United States as the line of the Missouri Compromise, which was used to divide the prospective slave and free states west of the Mississippi River, with the exception of Missouri, which is mostly north of this parallel.

In 1779 and 1780, surveyors were sent to mark the line on the ground as far as the Tennessee River. As they worked west their line drifted north until by the time they reached the river they were about 10′ north of 36°30′. Despite this error the boundary was set along the line surveyed. The final part of the Kentucky-Tennessee boundary, between the Tennessee River and the Mississippi River, was not surveyed until after 1819 when treaties extinguished Indian claims in the area. The final portion was surveyed east from the Mississippi River along 36°30′. Due to the relative precision of the survey of 36°30′ on the Mississippi River, Congress decided to continue the line west as the northern boundary of Arkansas Territory, with the exception of the Missouri Bootheel. [1]

The parallel 36°30′ north is part of a nearly straight east-west line of state borders (with small variations) starting on the East Coast of the United States, beginning with the border between Virginia and North Carolina. However, this boundary and the one between Kentucky and Tennessee line lies a few miles north of 36°30′ in places.

In southeastern Missouri, the Missouri Bootheel along the Mississippi River extends about 50 miles (80 kilometers) to the south, all the way to the 36th parallel north, and about 30 miles (50 kilometers) inland. This was because politicians in that region along that major river felt that it would be advantageous to be located in Missouri rather than in the Arkansas Territory, which became the State of Arkansas in 1836. The parallel 36°30′ then forms the rest of the boundary between Missouri and Arkansas.

The Missouri Compromise of 1820 established the latitude 36°30′ as the northern limit for slavery to be legal in the territories of the west. As part of this compromise, Maine (formerly a part of Massachusetts) was admitted as a free state. This addition maintained the balance of power in the U.S. Senate between the free states and the slaveholding states.

The bulk of Missouri lies north of the 36°30′ line, but Southern planters who lived in southeastern Missouri supported slavery, especially for farming on their cotton plantations. Hence, part of the Missouri Compromise arose from this. Also, the slave states of the Southern United States wanted to have the support of another slave state so the Senate could not abolish slavery in the United States. This situation remained in effect for decades because as the free states of Michigan, Wisconsin, and Iowa were admitted to the Union, the new slave states of Arkansas, Florida, and Texas were also admitted.

When the Republic of Texas joined the United States in 1845 as a slave state, it was required to cede all of its claimed land north of the 36°30′ latitude to the Federal Government. Over the following half-century, this land became parts of Kansas, Colorado, New Mexico, and Oklahoma. The Compromise of 1850 confirmed that the 36°30′ parallel was the northmost boundary of Texas. Then Kansas was admitted to the Union as a free state in 1861.

The gap between the northern boundary of Texas on the parallel 36°30′ north and the southern boundaries of Kansas and Colorado on the parallel 37° north created the No Man's Land that later became the Oklahoma Panhandle in 1889. While a significant part of Nevada (containing Las Vegas) is south of 36°30′, at the time of the admission of Nevada in 1864, it was in the New Mexico Territory. This land was not split off from the new Arizona Territory until 1871, when it was given to Nevada by the Federal government.

The Compromise of 1850 made no attempt to divide California along the line of 36°30′, or to allow slavery south of it; the social and political conditions created by the California Gold Rush ruled out any such idea. In fact, California was immediately admitted to the union as a free state

During the American Civil War (1861–65), all of the states located wholly south of 36°30′ north joined the Confederate States of America. All of the states with land north of the parallel, except Virginia, stayed in the Union, although Kentucky and Missouri had Confederate legislatures that were elected in parallel with their regular legislatures. Also Maryland, another slave state, was occupied by the Union Army under the commands of President Abraham Lincoln, and its legislature was thus pressured into voting not to secede. Naturally, Lincoln and the remaining members of the U.S. Congress wanted Maryland to stay in the Union in order to prevent the national capital city of Washington, D.C. from being surrounded by Confederate states, and hence being cut off from the rest of the Union. If such a thing had happened, then the Federal government would have been forced to move somewhere else further north, such as to Philadelphia.

Starting at the Prime Meridian and heading eastwards, the parallel 36°30′ north passes through: