Papeete (pronounced [pa.pe.ʔe.te]) [3] is the capital city of French Polynesia, an overseas collectivity of the French Republic in the Pacific Ocean. The commune of Papeete is located on the island of Tahiti, in the administrative subdivision of the Windward Islands, of which Papeete is the administrative capital. [4] The French High Commissioner also resides in Papeete. [5]

It is the primary center of Tahitian and French Polynesian public and private governmental, commercial, industrial and financial services, the hub of French Polynesian tourism and a commonly used port of call. [5] The Windward Islands are themselves part of the Society Islands. The name Papeete, sometimes also spelled Pape’ete in Tahitian, [Note 1] means "water from a basket". [6] The urban area of Papeete had a total population of 136,771 inhabitants at the August 2017 census, 26,926 of whom lived in the commune of Papeete proper. [2]

Papeete Town Hall, a replica of the Royal Palace of Papeete razed in the 1960s

At the outbreak of World War I Papeete was shelled by German vessels, causing loss of life and significant damage.

The growth of the city was boosted by the decision to move the nuclear weapon test range from Algeria to the atolls of Mururoa and Fangataufa, some 1,500 km (930 mi) to the east of Tahiti; this originated in particular in the construction of the Faa'a airport next to Pape'ete, the only international airport in French Polynesia. In 1983, The Church of Jesus Christ of Latter-day Saints built the Papeete Tahiti Temple here because of the large number of members in the region. On 5 September 1995 the government of Jacques Chirac conducted the first of the last series of nuclear test detonations off the shores of Moruroa. A resulting riot in Papeete lasted for two days and damaged the international airport, injured 40 people, and scared away tourism for some time. [10] [11] Similar rioting occurred after another French nuclear test in the same area in 1987.

There are very busy streets in the town center, and sometimes traffic can be a problem since the streets are very small. There is a freeway that starts close to the town center starting with Pomare Boulevard, named after the Tahitian Royal Family dynasty of the 19th century. By air, the people would use the Faaa International Airport. From there they could either take Air Tahiti to go to another island of the territory or take a plane like Air Tahiti Nui to go international. By sea, they would either take Moorea ferries to go to Moorea or the Bora Bora cruiseline to go to Bora Bora.

Traveling tourists arrive and depart Papeete via cruise ship at Papeete Harbor or domestic airline at Faa'a International Airport, which was completed and opened in 1962.

Papeete features a tropical monsoon climate with a wet season and dry season. However, precipitation is observed even during the city's dry season. The dry season is short, covering only the months of August and September. The rest of the year is wet, with the heaviest precipitation falling in the months of December and January. Temperatures are relatively constant throughout the course of the year, averaging around 27 °C (81 °F). 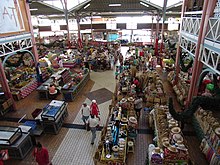 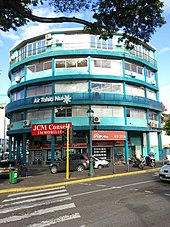 Air Tahiti Nui has its head office in the Immeuble Dexter in Papeete. [23]

The Lycée Paul-Gauguin is located in the city.