From Wikipedia, the free encyclopedia
Not to be confused with Florida Atlantic University.
Christian university in West Palm Beach, Florida

Palm Beach Atlantic University (PBA) is a private Christian university in West Palm Beach, Florida. The university's nine colleges focus on the liberal arts with a select collection of professional studies. In 2019, its undergraduate enrollment was approximately 2,800.

Founded in 1968, the university grew out of a local Baptist church. It operated out of assorted buildings until the first purpose-built campus building was completed in 1982. A subsidiary campus operates in Orlando. Eighteen sports teams represent the university in NCAA Division II competitions.

Palm Beach Atlantic University was the vision of and was founded by Jess C. Moody in 1968 while he was the pastor of First Baptist Church of West Palm Beach. He served until the first class graduated in 1972 and resigned from the presidency to focus on his duties at First Baptist Church. Two laymen of the church, Donald Warren and Riley Sims, became involved as trustees before the university began and continued to contribute time and support for many years. Warren served as chairman of the trustees for 38 years until 2007.

In July 1972, Warner E. Fusselle, previously president of Truett-McConnell College, became the second president of the university and led the accreditation process with the Southern Association of Colleges and Schools which was achieved in December 1972.

Rhea's leadership saw the development of the Rinker campus and expansion of academic programs.

Paul R. Corts, previously president of Wingate College, became the fifth president of Palm Beach Atlantic. He presided over the addition of two graduate programs, from 1991 until 2002. He resigned in 2002 to accept a position as Assistant Attorney General for Administration with the United States Department of Justice.

David W Clark, President of FamilyNet, and founding provost of Regent University became the sixth President in 2003. During his presidency enrollment grew from 2600 to 3291. Five new buildings were completed including the magnificent Warren Library, a mini campus in Wellington was built, and 96 acres (390,000 m2) for a new athletic campus were acquired. The university budget grew from $43 million to $73 million. Over 4,600 or 40 percent of all degrees were awarded during his tenure. President Clark announced his retirement during the 2008-9 academic year the end of June.

On July 1, 2009, Lu Hardin took office as the seventh president of Palm Beach Atlantic University. A former Arkansas state senator, Hardin had previously served as the president of the University of Central Arkansas. [7] Hardin resigned the presidency of PBA on March 4, 2011, [8] shortly before pleading guilty in federal court in Little Rock, Arkansas, to two federal felony charges (wire fraud and money laundering) which occurred during his tenure at UCA. [9] 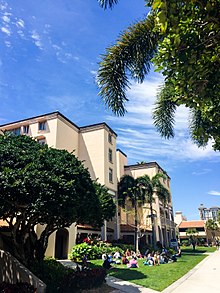 PBA's campus is located in West Palm Beach. The first structure built specifically for PBA, the W.G. Lassiter Jr. Student Center, was completed in 1982. This was followed by Johnson Hall and Sachs Hall in 1989. A new campus was established in Orlando in 2002 and in Wellington in 2002. The Wellington campus ceased operations in 2017.

A continuous building program has characterized the last decade of growth at Palm Beach Atlantic University. In January 2007 the first phase of the state-of-the-art 62,000 sq ft (5,800 m2). Warren Library was dedicated. The second phase was completed in December 2009 and is a total of 86.000 sq ft (7.9897 m2). The building is named after Donald Warren, who served as the first chairman of the Board of Trustees for 38 years. The university has an extension campus in Orlando offering adult and graduate degrees.

A permanent home for Sailfish athletics is in the form of a 78-acre Marshall and Vera Lea Rinker Athletic Campus at 3401 Parker Avenue in West Palm Beach — just a short drive from Palm Beach Atlantic University. The campus, located between I-95 and Parker Avenue just north of Southern Boulevard, provides facilities for training and hosting intercollegiate and intramural and club sport competitions. The facility opened in September 2014 and was completed in August 2017. [12] The athletic campus includes lighted competition baseball, softball and soccer fields, an intramural softball field, Mitch Gornto Tennis Center with 12 match courts and one championship court. Outdoor basketball, racquetball and sand volleyball courts are to be completed at a later date.

The university offers an honors program through the Frederick M. Supper Honors Program. Students in this program read primary texts and take part in Socratic dialogue to understand the predominant and defining ideologies of the major historical epochs. The program seeks not only to provide a rigorous education in the liberal arts, but also to incorporate students into the Great Conversation among writers of the Western canon.

The Centers of Excellence

Palm Beach Atlantic University has five centers of excellence that provide opportunities for students to gain expertise in their given field.

Chapel is held four times weekly in the DeSantis Family Chapel, Monday through Thursday at 11 a.m., as well as other times, dates and locations that are listed on the chapel calendar. Chapel is a requirement for all full-time undergrad students. Students must attend 24 chapels per year. [13]

"Workship" is the school's community service program that seeks to "respond to human needs with Faith-filled action in the community and throughout the world," with the intention that such community service might help students discern their vocation and develop a lifelong habit of servant leadership. [14]

Mission Trips are offered yearly for students. Mission teams travel to countries all over the world and minister through evangelism, performing arts, street ministries, construction, medical outreach, sports workshops and more. The teams travel during the summer on a multi-week trip and on a one-week Spring Break trip. [15]

PBA is a member of the Sunshine State Conference, NCAA Division II. The men's and women's track and field teams compete as Division II independents as the conference does not sponsor these sports. School colors are navy blue and white. The new athletic campus has soccer, lacrosse, baseball, softball, tennis, and running trails as well as a new state of the art weight and training room. The new 34,000 sq ft (3,200 m2) building houses locker rooms, meeting rooms as well as athletic offices. The university fields various men's and women's athletics: