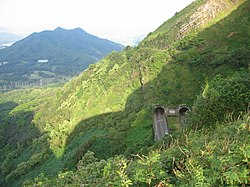 Highway 61 runs through the Nuʻuanu Pali Tunnels, as seen from the Old Pali Highway.

Hawaii Route 61, often called the Pali Highway, is in Honolulu County, Hawaii, United States, that is the main highway connecting downtown Honolulu with the windward side of Oʻahu island. From downtown, it traverses up Nuʻuanu Valley and the residential neighborhood of Nuʻuanu, passes through the Nuʻuanu Pali Tunnels, and descends to the major windward communities of Kāneʻohe (reached by Kamehameha Highway, State Route 83) and Kailua.

The current Pali Highway is actually the third roadway to be built here. The original Pali "highway" went along much of the same route and portions of the old road still exist, although closed to vehicular traffic. When the current Pali Highway and its tunnels opened, the original roadway was closed and is now used by hikers. The "Old Pali Highway", [1] as it is now called, is noted in the popular culture of Hawaii for being a place with strong spiritual connections. Many ghost stories have settings along this old highway. A large portion of the old highway was built over the ancient Hawaiian foot paths that traversed the famous Pali pass, which was the most easily accessible route to take from the Windward to Honolulu side. This was because much of the Koʻolau range on the Windward side has steep cliffs that make it nearly impossible to traverse over safely. "Pali" is the Hawaiian word for precipice. [2]

The highway was mentioned as an "awe-inspiring drive" in Car and Driver's "10 Best Drivers' Cities." [3]

The lower mouth of Nuʻuanu valley is the site of historic Oahu Cemetery, founded in 1844. Over time it was expanded with the Royal Mausoleum of Hawaii in 1863, and the Kyoto Gardens of Honolulu Memorial Park. A few blocks to the east is the National Memorial Cemetery of the Pacific.

Hawaii Route 61 has several free scenic lookouts, including the Pali Lookout. The Queen Emma Summer Palace is also on the Pali (2913 Pali Hwy). The following foreign consulates are located on the Pali: The Pali is also the site of the following houses of worship and religious originations: