From Wikipedia, the free encyclopedia
(Redirected from Palestinian American)

Palestinian Americans ( Arabic: فلسطينيو أمريكا‎) are Americans who are of full or partial Palestinian descent.[ citation needed] It is unclear when the first Palestinian immigrants arrived into the United States. Later immigrants came to the country fleeing the Israeli-Palestinian conflict.

The New York City Metropolitan Area, including North Jersey and Brooklyn, is home to the largest Palestinian population in the United States.

The first Palestinians who immigrated to the United States arrived after 1908, when the Ottoman Empire passed a new conscription law mandating Palestinians into the military. [2] These Palestinians were overwhelmingly Christians, and only a minority of them were Muslims. Palestinian immigration began to decline after 1924, with a new law limiting the number of immigrants, as well as the Great Depression, which heavily reduced immigration.

The population in the United States began to increase after World War II. The 1948 Arab–Israeli War, the Nakba, and the establishment of the state of Israel in 1948 caused many Palestinians to immigrate, most as refugees. However, the greatest wave of Palestinian immigration began in 1967 after the Six-Day War, or as Middle Easterners and North Africans call it the June War. This wave of immigrants reached its peak in the 1980s.[ citation needed]

Paterson, New Jersey has its southern half of the city nicknamed Little Ramallah, with an Arab American population estimated as high as 20,000 in 2015. [7] It has the most concentrated area of Palestinian Americans in the entire United States. [8] It is also called Little Istanbul, since it also has a growing Turkish American community. 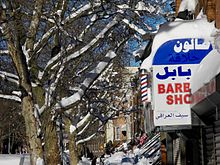 Bay Ridge in Brooklyn, New York City; also has a strongly diverse Arab community, in which its largest Arab groups are Palestinians and Yemenis. Its strong presence is noticeable from Arab shops to Babel Barber Shop, shown above during the January 2016 snow storm.

Despite the fact that many Arabs who immigrated to the United States from the late 19th century being Christians, the majority of Palestinian Americans practice the Sunni sect of Islam, in the Hanafi and Shafi'i madhab. [13] Palestinian Christians mostly belong to the Greek Orthodox Church of Jerusalem, with a significant minority in the Latin and Melkite churches. Smaller minorities adhere to various sects of Protestantism. [14]

In the United States approximately 46% of Palestinians have obtained at least a college degree, compared to 18% of the American population. [16] ‹See TfM›[ failed verification] The study of culture and the Arabic language is increasingly important among Palestinians, especially in college and graduate school. Thus, some Palestinian or Arab organizations are working to monitor and improve the teaching of Arab history and culture in the American schools. [3] Palestinians, along with Jordanians, have one of the highest education rates in the Middle East. [17]

Among the 90 percent of Palestinian American men and 40 percent of women who are in the labor force, 40 percent and 31 percent, have either professional, technical, or managerial positions. There are also large numbers in sales: 26 percent of men, and 23 percent of women. The self-employment rate for men is a significant 36 percent (only 13 percent for women), compared to 11 percent for non-immigrant men. Of the self-employed, 64 percent are in retail trade, with half owning grocery stores. In terms of income, the mean for Palestinian families in 1979 was $25,400, with 24 percent earning over $35,000 and 20 percent earning less than $10,000. [13]

Palestinian culture is a blend of Eastern Mediterranean influences. Palestinians share commonalities with nearby peoples of the Levant, including Egyptians, Lebanese, Syrians, and Jordanians.

Kanafeh is a popular Palestinian dessert which originated from Nablus. Kanafeh is becoming very popular in the United States, mostly in New York City.

Palestinians cook many foods native to Palestine, or a broader definition, the Levant. Examples are kanafeh, hummus, falafel, musakhan, waraq al-'inib, and other Palestinian dishes. These foods, such as Kanafeh, have been very popular in the United States, mostly in New York City. [18]

Palestinian Americans have owned Middle Eastern groceries, shops and restaurants ever since their immigration to the United States. Most of these businesses are in large cities such as New York City and Chicago. [19]

While Palestinian Americans are typically not more politically active than the population at large they are very politically aware of their history and the issues facing their homeland. They are more active in social organizations, such as mosques, churches and local associations, than in political ones, though the former have strong political implications. In the absence of a Palestinian state, the unity and preservation of communities in the diaspora serve to maintain Palestinian identity.