From Wikipedia, the free encyclopedia
(Redirected from Pacific Forum CSIS)
Not to be confused with Pacific Islands Forum. 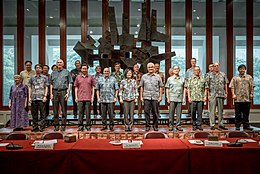 Pacific Forum is a Honolulu-based foreign policy research institute focused on the Indo-Pacific. Founded in 1975, the Pacific forum collaborates with a network of research institutes from around the Pacific Rim, drawing on Asian perspectives and disseminating project findings and recommendations to global leaders, governments, and members of the public. Pacific Forum is non partisan and does not engage in classified work. [1]

Pacific Forum was founded in 1975 with a mission of establishing “a Forum in the Pacific under the auspices of the private sector for a continuing trans-Pacific private dialogue and consultation among the developing and developed countries of the Pacific area.” [2]

The Pacific Forum promotes strategic stability in the region primarily through a series of Track 1.5 dialogues focused on affirming US commitments to its alliance partners and maintaining a strategic balance in the Indo-Pacific. [4] 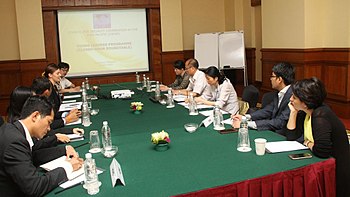 The Young Leaders Program was established in 2004 to train young professionals in international policy affairs at an early juncture in their careers. Currently, the organization’s network of Young Leaders consists of more than 1,000 members from 56 countries. [6]

Pacific Forum produces three regular publications from the organization’s own research as well as by external authors. [7] These publications include: