The Pacific Exchange was a regional stock exchange in California until 2001. Its main exchange floor and building were in San Francisco, California, with a branch building in Los Angeles, California.

In 1999, the exchange became the first U.S. stock exchange to demutualize. The trading floor in Los Angeles was closed in 2001, followed by the floor in San Francisco a year later. 2003 saw the exchange launch PCX Plus, an electronic options trading platform. 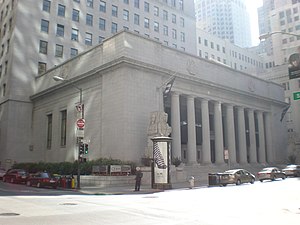 The San Francisco Pacific Exchange building, housing the equities trading floor, is located on Pine Street at the corner of Sansome Street in the Financial District. It was built in 1930 in the Moderne style, with its street facades clad in Yule marble.

The building was sold to private developers and converted by Equinox Fitness into a fitness center.

An options trading floor still operates in the adjacent Mills Building. It was originally connected to the main building.

The Mills Building trading floor had a massive expansion in September 1984. It was again expanded in the mid-nineties beginning with a larger entrance on Montgomery Street which utilized existing spiral marble staircases. The west wall was then knocked out and the corridor behind turned into additional trading areas. The overhead monitors were stacked four rows high, twice as high as the existing trading pits, in order to maximize the use of the narrow area, although these were removed later as a result of seismic concerns and replaced with countertop flat screens. Next, an unused area behind the trade-match room was converted into six additional trading areas to accommodate the exponential growth being experienced in late 1990s.

The dual listing of issues in August 1999, decimalization of options quotes, and technological replacement of open out-cry trading took away market share from the equity options trading floor. In spite of all of this, the options floor still is functioning today with local firms such as Casey Securities and Student Options, and nationally known firms, such as Goldman Sachs, maintaining a presence. Other participants maintain offices and trading facilities off the exchange floor, but still remotely partake in electronic exchange trading.