From Wikipedia, the free encyclopedia
(Redirected from Orange Line (Los Angeles Metro))
Bus rapid transit line operating on a dedicated right-of-way in Los Angeles County
Not to be confused with Orange County Line.

The G Line (formerly the Orange Line) is a bus rapid transit line in the Metro Busway network in Los Angeles, California. It operates between Chatsworth and North Hollywood stations in the San Fernando Valley. The 18-mile (29 km) G Line uses a dedicated, exclusive right-of-way for the entirety of its route with stations located at approximately one mile (1.6 km) intervals; fares are paid via TAP cards at vending machines on station platforms before boarding to improve performance. It is one of the two lines in the Metro Busway system and is operated by the Los Angeles County Metropolitan Transportation Authority (Metro).

The line, which opened on October 29, 2005, follows part of the Southern Pacific Railroad's former Burbank Branch Line which provided passenger rail service from 1904 to 1920; it was subsequently used by Pacific Electric streetcars from 1911 to 1952. At North Hollywood station, the G Line connects with the B Line subway which offers service to Downtown Los Angeles via Hollywood. The Metro Orange Line bicycle path runs alongside part of the route.

In 2020, the line was renamed from Orange Line to the G Line while retaining its route number and the color orange in its square icon as part of a complete renaming of lines by the LACMTA. [3] [4] [5] [6]

The Institute for Transportation and Development Policy (ITDP), under its BRT Standard, has given the Orange Line corridor a Bronze ranking. [7]

Because of its many differences from a standard bus service, Metro has branded the G Line as part of the region's network of light and heavy rail lines and it appears on the same system map as the rail lines. The buses are painted in the silver-and-gray color scheme of Metro Rail vehicles. The G Line is rarely referred to by its line number (901), but it sometimes appears on documents and destination signage.

G Line buses operate 24 hours a day. [8] At peak hours (between 6am and 7pm eastbound, 5am and 6pm westbound), every other bus is a short turn, only operating between North Hollywood and Canoga station.

The majority of the Orange Line is built on part of the former Southern Pacific Railroad, which was later taken over for Pacific Electric Red Car service; passenger service on this segment ended in 1952, but the right-of-way remained undeveloped, and was acquired by Metro in 1991. As the Metro Rail system was being designed in the 1990s, initial plans were to build an extension of the Metro Red Line there, since the purchased right-of-way's eastern terminus was at the site of the planned North Hollywood station. However, political developments stymied these plans: community objections to surface transit along the route resulted in a 1991 law mandating that any line along the route be built as a deep-bore tunnel, [13] [14] but a 1998 ballot measure driven by perceptions of mismanagement banned the use of county sales tax to fund subway tunneling. [15] [16] [17] Prevented from using the route for rail, Metro proceeded to create its first bus rapid transit line along the corridor, and despite further lawsuits from area residents, [18] the line opened on October 29, 2005, at a final cost of $324 million or $23 million per mile ($424 million and 30.1 million adjusted for inflation). [19]

On June 23, 2009 construction began on a four miles (6.4 km) extension from Canoga northward along the Southern Pacific trackbed [20] to the Metrolink station in Chatsworth. Metro's board approved the plan on September 28, 2006, and it was completed in 2012 at a cost of $215 million ($239 million adjusted for inflation). [21] [22] [23] This created two branches at the western end of the line beyond Canoga station; the older branch proceeded outside the busway on city streets to Warner Center. In 2018, this branch was eliminated and replaced with a frequent service local shuttle, leaving the entirety of the Orange Line on dedicated right-of-way. [24]

In July 2017, Metro voted to begin a transition to an all-electric bus fleet. While the entire fleet will probably not be replaced until 2030, the transition on the two Metro Busway lines will begin much sooner. A contract was signed to purchase 35 60-foot articulated zero emission New Flyer XE60 buses for the Orange Line, with all-electric service on the line expected by 2020. [25] 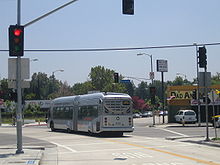 Collisions with automobiles occurred weekly during the first several months of operations. Metro has noted that the Orange Line had about the same accident rate as other bus lines in the city on a per-mile basis, [26] [27] and has stated that the line's accident rate is "less than half" of Metro's entire fleet of buses. [28] The A Line also had a significant number of collisions in its early years and currently has the highest fatality rate in North America. [29]

In December 2005, Metro called for the installation of red-light cameras at most intersections. [32]

As part of the package of enhancement to the LA Metro system approved by voters in 2016 with Measure M, in October 2017 Metro recommended a series of improvements to the Orange Line. These include quad crossing gates at 34 intersections, and the construction of a mile-long elevated section between Sepulveda and Van Nuys Boulevard. These improvements would eliminate much of the time Orange Line buses spend waiting at red lights, and would cut end-to-end travel time along the entire route by 29%. Projected construction costs are $283 million.

The project is currently in the pre-construction, planning, and public outreach phase, but the goal is to begin full construction in 2019 and complete it by 2025. [33] [34] The pre-construction phase of the Metro Orange Line grade-separation has already begun, starting with the LADWP undergrounding the overhead power lines at Sepulveda Blvd and Orange Line in Van Nuys.

Two possible extensions of the Orange Line to Burbank have been proposed. One possible extension proposed by transit advocates, including members of The Transit Coalition, [35] is an extension from North Hollywood station to Hollywood Burbank Airport, which would run north on Vineland Avenue and east on Vanowen Street to the airport, to connect with the Metrolink station.

Another extension proposed is from the North Hollywood Station along Chandler Boulevard that would connect to the Burbank Downtown Metrolink Station. [36] The 3.9-mile (6.3 km) long arrangement would provide increased access to commuter rail as well as transit access to the pedestrian-friendly entertainment and retail district of Downtown Burbank at the proposed new terminus. Proponents of this expansion also argue that the extended line could eventually serve as the beginning of a San Fernando Valley / Orange Line to Pasadena / Gold Line connection.

As of October 2011, both the Bob Hope Airport and Downtown Burbank extension options are being studied, in addition to other potential BRT routes in Los Angeles County. The abandoned roadbed east of North Hollywood Station was converted into the Chandler Bikeway rail trail. [37]

When purchased in 1991, Metro originally considered the route for use as either light rail or a Red Line extension: both ideas have been discussed repeatedly by train advocates. A railroad route would allow longer vehicles and higher operating speeds. The conversion back to a railroad would be relatively inexpensive: former mayor Richard Riordan described it as the "least expensive rail alternative" of the lines under consideration. [38] However, there are several legal and political challenges. Until 2014, Metro was prohibited by law from converting the Orange Line to any form of rail other than a subway. Due to a 1998 proposition, Metro also cannot spend the sales tax revenue from previously passed propositions, but can use revenue from subsequent tax increase propositions such as Measure R funds (conversion of Orange Line to rail is not included in any Measure R projects, but does include the "subway to the sea" along Wilshire Boulevard and other subway proposals) and other sources of revenue on subways.

Metro has been criticized for dismantling existing railroad infrastructure for bus usage. In October 2013, Los Angeles City 4th District Councilman Tom LaBonge introduced a motion to support the repeal of Public Utilities Code section 130265 (1991's SB 211, or Robbins Bill) and support of any legislative and/or administrative action by Metro which would prioritize the development of rail-based transit. The motion was passed by the City Council on October 29, 2013 and approved by the Mayor on November 6, 2013. [39]

In April 2015, a report prepared for Metro estimated that conversion of the Orange Line to light rail would take two to three years and cost between $1.2 and $1.7 billion. This price would include both upgraded infrastructure and corresponding rail vehicles. Improvements to the busway to improve capacity, including more and larger buses and grade separation at busy intersections, could be implemented for $230 to $350 million. The report noted that if not upgraded in some way in the near future, the Orange Line would soon reach capacity at rush hours. [40]

There is concern that the Orange Line will soon reach its engineered capacity, and has exceeded its designed capacity during peak periods. [41] During peak hours, the signaling system is designed to balance the Orange Line buses with vehicle cross traffic. Adding more buses requires platooning, or bunching, which is the running of convoys of two or more buses together, similar to what rail achieves in having multiple cars per train. Greater signal prioritization is also an option, and comes at the cost of decreasing cross street travel times and capacity. Another alternative requires the changing of state law or the granting of a Caltrans exemption from state law and the purchasing of 80-foot-long (24 m) buses. [42]

On October 27, 2005, two days before the line's official opening, a motorist driving with a suspended license ran a red light and collided with an eastbound bus at Vesper Avenue. There were no injuries. [43]

During November 2005 there were two collision-caused injuries. In the first, a fare inspector on the bus was taken to a hospital for minor injuries after a 65-year-old female driver made an illegal right turn against a red light and struck an Orange Line bus near the crossing at Corbin Avenue in Reseda. [44] In the second, one person was seriously injured and 14 others hospitalized after an elderly motorist apparently ran a red light while using a mobile phone. [45] After the second collision, Metro instructed all buses to slow down at intersections [30] and installed white strobe lights on the sides of the buses to improve visibility. They said that they would review any and all ideas to improve safety on the line. [31]

In October 2006, a delivery truck hit the side of a bus. One person was seriously injured and 16 received minor injuries. [46]

The G Line currently uses NABI 60-BRT buses. The large buses, which have been dubbed "Metro Liners" by Metro, are twenty feet longer than the standard forty-foot bus, and carry up to 57 passengers, which is about 50% more passengers. (A prototype 65-foot bus is also used for the G Line.) The buses are articulated in the center due to this longer length and have three doors for faster boarding and alighting. Vehicles have no fareboxes because the Metro G Line operates on a proof-of-payment system, like the Metro Rail network. These buses are scheduled to be replaced by battery electric New Flyer XE60 buses, starting in July 28, 2020 and finish by December 2020.