From Wikipedia, the free encyclopedia
For the later company that helped to settle the state of Ohio, see Ohio Company of Associates. 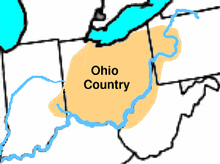 The Ohio Company, formally known as the Ohio Company of Virginia, was a land speculation company organized for the settlement by Virginians of the Ohio Country (approximately the present state of Ohio) and to trade with the Native Americans. The company had a land grant from Britain and a treaty with Indians, but France also claimed the area, and the conflict helped provoke the outbreak of the French and Indian War. [1]

Virginian explorers recognized the potential of the Ohio region for colonization and moved to capitalize on it, [2] as well as to block French expansion into the territory. [1] In 1748, [2] Thomas Lee and brothers Lawrence and Augustine Washington organized the Ohio Company to represent the prospecting and trading interests of Virginian investors. [3] 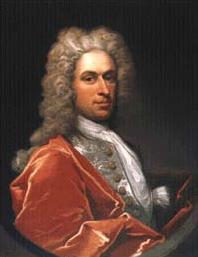 Thomas Lee, president of the Virginia Council of State, organized the Ohio Company of Virginia in 1748.

In addition to the mandate and investment of Virginia Royal Governor Robert Dinwiddie, [4] other original members included John Hanbury, Colonel Thomas Cresap, George Mercer, John Mercer, and "all of His Majesty's Colony of Virginia." In that same year, George Mercer petitioned King George for land in the Ohio country, [4] and in 1749, the British Crown granted the company 500,000 acres in the Ohio Valley between the Kanawha River and the Monongahela. [5] The grant was in two parts: the first 200,000 acres were promised, and the following 300,000 acres were to be granted if the Ohio Company successfully settled one hundred families within seven years. [6] Furthermore, the Ohio Company was required to construct a fort and provide a garrison to protect the settlement at their own expense. But the land grant was rent and tax free for ten years to facilitate settlement. [7]

The organizers signed a treaty of friendship and permission at Logstown with the main tribes in the region in 1752 . [7] A rival group of land speculators from Virginia, the Loyal Company of Virginia, was organized about the same time, and included influential Virginians such as Thomas Walker and Peter Jefferson (father of Thomas Jefferson).

In 1752 George Mason, later to become a major founding father, became treasurer of the Ohio Company, a post he held for forty years until his death in 1792.

In 1748–1750, the Ohio Company hired Thomas Cresap who had opened a series of trading posts along the Potomac at Long Meadow, Oldtown, Maryland and Will's Creek (now Cumberland) on the foot of the eastern climb up the Cumberland Narrows along what was soon to be called the Nemacolin Trail, one of only three mid-mountain-range crossings of the Appalachian Ridge and Valley system outside the Hudson-Great Lakes route, or southern Georgia-Mississippi-Western Tennessee plains route. Cresap was given a contract to blaze a small road over the mountains to the Monongahela River, and then to start widening this road into a wagon road. In 1750, the Ohio Company hired Christopher Gist, a skillful woodsman and surveyor, to explore the Ohio Valley in order to identify lands for potential settlement. He surveyed by estimating the Kanawhan Region and the Ohio Valley tributaries beginning in 1750, 1751 and 1753. His journals provide valuable insights of the greater Ohio Valley and the Alleghenies. Gist travelled as far west as the Miami Indian village of Pickawillany (near present Piqua, Ohio). Upon the basis of his report, the Ohio Company settled in an area in Western Pennsylvania and present-day West Virginia; Gist and Cresap both receiving sizable settlements on the west side of the mountains. In 1752 the company had a pathway blazed between the small fortified posts at Wills Creek ( Cumberland, Maryland), and Redstone Old Fort ( Brownsville, Pennsylvania); Cresap and Nemacolin had established the location in 1750, which overlooked Redstone Creek and the ancient Monongahela River ford.

The settlement efforts were complicated by the conflicting land claims of the time. The Ohio Country ceded by the King through Governor Dinwiddie included, in Dinwiddie's opinion, the "forks of the Monongahela," present-day Pittsburgh. In addition to the Pennsylvania colonial government claims of this territory, the French were fighting for and occupying much of the Ohio Valley, most notably at Fort Duquesne. [7] Dinwiddie responded by sending a military unit under the command of George Washington to the region, [8] which led to the outbreak of the French and Indian War.

In 1763, the Ohio Company sent a representative to petition the British Crown for a grant renewal. The plans for settlement and military development continued, with Henry Bouquet's 1764 plans to construct military posts around prospective western settlements. [9] However, following Pontiac's War, land claims west of the Appalachian Mountains were forfeited to the Native American tribes in the Proclamation of 1763, requiring them to be re-purchased through King George III. [10] 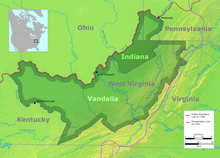 In 1768, the British government authorized Sir William Johnson to make the Treaty of Fort Stanwix, purchasing land rights from the Iroquois, in accordance with the Proclamation of 1763. [11] [12] Samuel Wharton and William Trent applied for a "despoiled traders" (frontiersmen who had been aggrieved by the various Indian raids during and after the French and Indian Wars) land grant in 1768, and to get approved by the British Crown, they joined with a number of other land speculators to form the Walpole Company, [9] named for Thomas Walpole, a British lawyer involved in the endeavor. [6] The goal was acquiring 2.5 million acres of Ohio Country land. Benjamin Franklin was one of the seventy-two shareholders, as well as included Franklin's son William (then Royal Governor of New Jersey), George Croghan and Sir William Johnson, as well as Franklin's perennial London allies William Strahan and Richard Jackson. The Walpole Company, Indiana Company, and members of the Ohio Company reorganized, and on December 22, 1769, formed the Grand Ohio Company. [13] In 1772, the Grand Ohio Company received from the British government a grant of a large tract lying along the southern bank of the Ohio as far west as the mouth of the Scioto River. A colony to be called "Vandalia" was planned. However, the outbreak of the American Revolutionary War interrupted colonization and nothing was accomplished. The company, based in London, ceased operations in 1776.

The Ohio Company of Associates was organized in 1786, composed largely of New England veterans who had certificates for land from Congress for their services during the Revolution. [14]