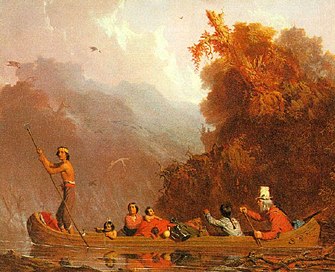 "Oh Shenandoah" (also called simply "Shenandoah" or "Across the Wide Missouri") is a traditional American folk song of uncertain origin, dating to the early 19th century.

The song appears to have originated with Canadian and US voyageurs or fur traders traveling down the Missouri River in canoes, and has developed several different sets of lyrics. Some lyrics refer to the Oneida chief Shenandoah and a canoe-going trader who wants to marry his daughter. By the mid 1800s versions of the song had become a sea shanty heard or sung by sailors in various parts of the world.

The song is number 324 in the Roud Folk Song Index.

Until the 19th century only adventurers who sought their fortunes as trappers and traders of beaver fur ventured as far west as the Missouri River. Most of these Canadian and US " voyageurs" in the fur trade era were loners who became friendly with, and sometimes married, Native Americans. Some lyrics of this song heard by and before 1860 tell the story of a trader who fell in love with the daughter of the Oneida Iroquois chief Shenandoah (1710–1816), who lived in the central New York state town of Oneida Castle. He was a co-founder of the Oneida Academy, which became Hamilton College in Clinton, New York, and is buried on the campus grounds.

["Shenandoah"] probably came from the American or Canadian voyageurs, who were great singers .... In the early days of America, rivers and canals were the chief trade and passenger routes, and boatmen were an important class. Shenandoah was a celebrated Indian chief in American history, and several towns in the States are named after him. Besides being sung at sea, this song figured in old public school collections.

The canoe-going fur-trading voyageurs were great singers, and songs were an important part of their culture. [1] Also in the early 19th century, flatboatmen who plied the Missouri River were known for their shanties, including "Oh Shenandoah". Sailors heading down the Mississippi River picked up the song and made it a capstan shanty that they sang while hauling in the anchor. [2] This boatmen's song found its way down the Mississippi River to American clipper ships, and thus around the world. [3]

The song had become popular as a sea shanty with seafaring sailors by the mid 1800s. [4] A version of the song called "Shanadore" was mentioned in Capt. Robert Chamblet Adams' article "Sailors' Songs" in the April 1876 issue of The New Dominion Monthly. [5] He also included it in his 1879 book On Board the "Rocket". [6] "Shanadore" was later printed as part of William L. Alden's article "Sailor Songs" in the July 1882 issue of Harper's New Monthly Magazine, [7] [8] [9] and in the 1892 book Songs that Never Die. [10] Alfred Mason Williams' 1895 Studies in Folk-song and Popular Poetry called it a "good specimen of a bowline chant". [11]

In a 1930 letter to the UK newspaper The Times, a former sailor who had worked aboard clipper ships that carried wool between Great Britain and Australia in the 1880s said that he believed the song had originated as a black American spiritual which developed into a work song. [12]

Since "Shenandoah" was a riverman's and then sailor's song and went through numerous changes and versions over the years and centuries, there are no set lyrics. Modern lyrics are usually some variation of the following:

Missouri, she's a mighty river.
Away you rolling river.
The redskins' camp, lies on its borders.
Ah-ha, I'm bound away, 'Cross the wide Missouri.

The white man loved the Indian maiden,
Away you rolling river.
With notions [13] his canoe was laden.
Ah-ha, I'm bound away, 'Cross the wide Missouri.

The chief disdained the trader's dollars:
Away you rolling river.
"My daughter never you shall follow."
Ah-ha, I'm bound away, 'Cross the wide Missouri.

At last there came a Yankee skipper.
Away you rolling river.
He winked his eye, and he tipped his flipper.
Ah-ha, I'm bound away, 'Cross the wide Missouri.

He sold the chief that fire-water,
Away you rolling river.
And 'cross the river he stole his daughter.
Ah-ha, I'm bound away, 'Cross the wide Missouri.

"O, Shenandoah, I long to hear you,
Away you rolling river.
Across that wide and rolling river."
Ah-ha, I'm bound away, 'Cross the wide Missouri.

A Mr. J.E. Laidlaw of San Francisco reported hearing a version sung by a black Barbadian sailor aboard the Glasgow ship Harland in 1894:

Lyrics to "Oh Shenandoah" as sung by Tennessee Ernie Ford (1959):

Mis-sou-ri, She's a mighty river,
Hi-o, you rolling river.
When she rolls down, her topsails shiver,
Hi-o, I'm bound away,
'Cross the wide, Mis-sou-ri.

The song is popular in local organizations such as Shenandoah University, Southern Virginia University, Washington and Lee University, and the Virginia Military Institute.

In 2006 "Shenandoah" was proposed as the "interim state song" for Virginia, with updated lyrics. [15] The proposal was contentious because the standard folksong refers to the Missouri River, and in most versions of the song the name "Shenandoah" refers to an Indian chief, not the Shenandoah Valley or Shenandoah River which lie almost entirely in Virginia. [15] [16] In 2015, " Our Great Virginia", which uses the melody of "Shenandoah" was designated by the Virginia Legislature as the official traditional state song of Virginia.

It features in the soundtrack of the 1965 movie, Shenandoah, starring Jimmy Stewart. It is also heard repeatedly in 1947's Mourning Becomes Electra, and as part of a medley in the 1962 film How the West Was Won.

Members of the Western Writers of America chose it as one of the Top 100 Western songs of all time. [17]

Various arrangements by Percy Grainger have been recorded by John Shirley-Quirk and other classically trained singers. "A song of the waters: variations on the folksong Shenandoah" is a classical composition by James Cohn. At least one version was arranged by Leslie Woodgate. [18]

The song was used in the HBO television series The Newsroom, season 3, episode 5, Oh Shenandoah. [19]

This song was also performed by the main character and his friends in the Netflix TV series House of Cards, season 1, chapter 8.