From Wikipedia, the free encyclopedia
Coast of Oʻahu

A sign announcing the entrance to the community of Haleʻiwa, the North Shore's largest settlement.

The North Shore, in the context of geography of the Island of Oʻahu, refers to the north-facing coastal area of Oʻahu between Kaʻena Point and Kahuku. The largest settlement is Haleʻiwa.

This area is best known for its massive waves, attracting surfers from all around the globe. 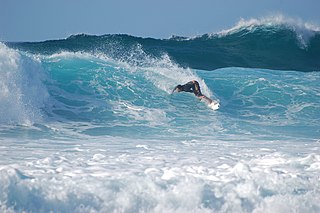 A surfer navigating a wave during an amateur competition at the North Shore's Banzai Pipeline.

The spot of Ehukai Beach, commonly known as the Banzai Pipeline, is the most notable surfing spot on the North Shore, and is considered a prime spot for competitions due to its close proximity to the beach, giving spectators, judges, and photographers a great view.

The North Shore is considered to be the surfing mecca of the world. Every December, the area hosts three competitions, which make up the Triple Crown of Surfing. The three men's competitions are the Hawaiian Pro, the O'Neill World Cup of Surfing, and the Billabong Pipeline Masters. The Pipe Masters was founded in 1971 and is regarded as the sport's top surfing contest. [1] The three women's competitions are the Hawaiian Pro, the Roxy Pro Sunset, and the Billabong Pro on the neighboring island of Maui. [2]

Waimea Bay hosts the Quiksilver Big Wave Invitational in Memory of Eddie Aikau. This is an exclusive competition that participants must be invited to. The competitions has a scheduled window of dates each winter, however the competition has a minimum requirement of consistent, 20-foot (6.1 m) waves. Therefore, the competition is not held every year.

Although the North Shore is known for its large winter surf, there are a number of surf schools that teach a beginner the basics of surfing in coves that are protected from the larger waves. 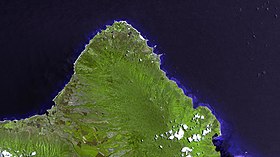 A satellite image of the North Shore.

Due to its natural environment, proximity to Honolulu, and large waves, the North Shore is a popular area for filming.

The documentary film Bustin' Down The Door (2008) chronicles the rise of professional surfing in the early 1970s.

The Fox Network TV show North Shore was filmed there. ABC's Lost was filmed almost entirely on O'ahu, with much of it filmed on the North Shore, including in the area of Turtle Bay.

The North Shore was also the setting for the movies Ride the Wild Surf, North Shore, Blue Crush, The Big Bounce, and Forgetting Sarah Marshall, as well as being fictionalized for the animated film Surf's Up.

Since December 2015 Hale'iwa and Pupukea have been the setting for the popular German reality TV show Die Reimanns portraying the life of the Reimann family on their lush estate in Sunset Hills.

The North Shore only houses one large commercial hotel, the Turtle Bay Resort, which also has two world-class golf courses designed by Arnold Palmer and George Fazio. Other accommodations are available in privately run condos, house rentals, and a youth hostel. [3]

While the North Shore is most famous for its surfing, there are a number of other popular activities on the North Shore including hiking, scuba diving, shark cage diving, snorkeling, food trucks, foilboard, shopping, shave ice, dolphin tours, etc.

The surf during the winter months regularly cause flooding along the North Shore, which may lead to temporary closure of Kamehameha Highway, erosion of some beaches, and take a toll on oceanfront homes. [4]