Norteños (Spanish: [noɾˈteɲos] meaning Northerners; Norteñas for females) are the various, loosely affiliated gangs that pay tribute to Nuestra Familia while in California state and federal correctional facilities. [4] Norteños may refer to Northern California as Norte. Their biggest rivals are the Sureños from Southern California. [5] [6] The statewide north-south dividing line between Norteños and Sureños has roughly been accepted as Salinas and Fresno. [6] [7] The gang's membership consists of Mexican Americans.

In 1968, [8] Mexican American inmates of the California state prison system separated into two rival groups, Norteños (northerners) [9] and Sureños (southerners), according to the locations of their hometowns. Norteños, affiliated with Nuestra Familia, were prison enemies of the Southern Latinos, who are composed of members and affiliates of La Eme, better known as the Mexican Mafia. While La Eme had initially been created to protect Mexicans in prison, there was a perceived level of abuse by members of La Eme towards the imprisoned Latinos from rural farming areas of Northern California. [10] The spark that led to the ongoing war between Norteños and members of the Mexican Mafia involved a situation in which a La Eme allegedly stole a pair of shoes from a Northerner. This event put into motion the longest-running gang war in the state of California and the founding of Nuestra Familia. [10]

Only Mexican Americans raised in Northern California can become Norteños. Norteños use the number 14 which represents the fourteenth letter of the English alphabet, the letter N, in order to pay allegiance to Nuestra Familia. [11] [12] It is sometimes written in Roman numerals as XIV, or a hybrid of Roman and Arabic numerals, X4. Norteños use the color red to signify affiliation. [11] Some Norteños will tattoo themselves with four dots. [13] A Norteño derogatorily refers to a Sureño as a "scrap" (Hispanicized scrapa) or "Sur rat" (south rat). Norteños also use images of the Mexican American labor movement, such as the sombrero, machete, and the logo of the United Farm Workers which is a stylized black Aztec eagle ("Huelga bird"). [13] 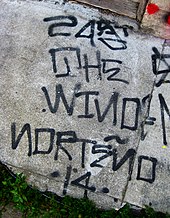 Norteños have trafficked drugs across the Mexican border. Their receiving members include other Norteños, and in few cases Mexican narcs. [7]

On January 9, 2005, in Ceres, California in Stanislaus County, Officer Sam Ryno was the first to respond to a call of a man with a gun in front of George's Liquors. Andres Raya, a U.S. Marine on leave after serving in Iraq, was armed with an SKS rifle and opened fire on officers, hitting Officer Ryno and killing Sergeant Stevenson. Raya was shot dead some time later after he opened fire on SWAT team members. [14]

Law enforcement officials claimed Raya had been involved in gangs for years prior to him signing up for military service. Modesto authorities discovered information during the investigation into the shooting that shows Raya was a Norteño gang member who was not involved in combat during his tour of duty in Iraq. A cooperative effort between local law enforcement, federal and military agencies revealed a large amount of information about Raya in a short amount of time. [15] [16]

In August 2013, a shooting done by a documented Norteno killed 3 people and wounded four others at Taco Choice, a Mexican restaurant and bar in Salinas, California. The gunman, a 21-year-old man, was sentenced to life without parole. [17]

Federal law enforcement agencies, long unable to infiltrate the group, began to step up their investigations in the late 1990s. In 2000 and 2001, 22 members were indicted on Racketeer Influenced and Corrupt Organizations Act (RICO) charges including several who were allegedly serving as high-ranking gang leaders while confined in Pelican Bay State Prison in northern California. [9] Thirteen of the defendants pleaded guilty; the other cases are still ongoing. Two of the defendants face the death penalty for ordering murders related to the drug trafficking. The largest of the federal investigations was Operation Black Widow. [9] In the aftermath of Operation Black Widow, the five highest ranking leaders of the Norteños were transferred to a federal supermax prison in Florence, Colorado.