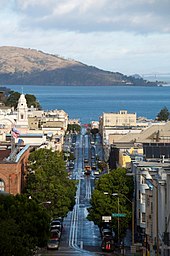 View of the San Francisco Bay from Mason Street. 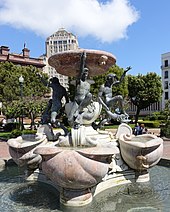 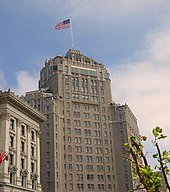 The Polk Gulch area comprises the westernmost portions of Nob Hill and Russian Hill. The southern portion of Nob Hill is known Lower Nob Hill. On its southwest slope, the area in between Nob Hill and the Tenderloin neighborhood is an area known as the " Tendernob".

The neighborhood was destroyed in the 1906 earthquake and fire, except for the granite walls surrounding the Stanford, Crocker, Huntington and Hopkins mansions. Those walls remain and black scars caused by smoke from the intense fires that burned after the quake can still be seen.

The intersection of California and Powell streets is the location of two of its four well-known and most expensive hotels: the Fairmont Hotel, the Mark Hopkins Hotel, the Stanford Court. The Mark Hopkins Hotel and the Huntington Hotel are located one block away at Mason & California. The hotels were named for three of The Big Four, four entrepreneurs of the construction of the Central Pacific Railroad: Leland Stanford, Mark Hopkins & Collis P. Huntington. The Fairmont is also named for a San Francisco tycoon, James G. Fair.

There are numerous historic and well maintained parks throughout Nob Hill. The most prominent park in the neighborhood is Huntington Park, which takes up an entire block, bounded by Sacramento Street to the north, Taylor Street to the west, California Street to the south, and Cushman Street to the east. Huntington Park was formerly the site of the mansion of Central Pacific Railroad baron Collis P. Huntington; the mansion was destroyed by the 1906 earthquake and fire, however, and Mr. Huntington's widow donated the property to the city to establish a park in 1915. [17] Huntington Park has a playground for children, landscaping, and several fountains.