From Wikipedia, the free encyclopedia
(Redirected from Nigerian American)

The first people of Nigerian ancestry in what is now the modern United States were brought to the Americas by force as slaves. [7] Calabar and Badagry ( Gberefu Island), Nigeria, became major points of export of enslaved people from Africa to the Americas during the 17th and 18th centuries. Most slave ships frequenting this port were English. [8] Most of the slaves of Bight of Biafra – many of whom hailed from the Igbo hinterland – were trafficked to Virginia. After 400 years in the United States and the lack of documentation because of enslavement, African Americans have often been unable to track their ancestors to specific ethnic groups or regions of Africa. Like Americans of other origins, at this point most African Americans have ancestors of a variety of ethnic backgrounds. Most of the people who were kidnapped from Nigeria were likely to have been Igbo, [9] and Yoruba. Other ethnic groups, such as the Fulani and Edo people were also captured and transported to the colonies in the New World[ citation needed]. The Igbo were exported mainly to Maryland [10] and Virginia. [11] They comprised the majority of all enslaved Africans in Virginia during the 18th century: of the 37,000 Africans trafficked to Virginia from Calabar during the eighteenth century, 30,000 were Igbo.[ citation needed] In the next century, people of Igbo descent were taken with settlers who moved to Kentucky. According to some historians, the Igbo also comprised most of the slaves in Maryland. [11] This group was characterized by high rates of rebellion and suicide, as the people resisted and fought back against enslavement.

Some Nigerian ethnic groups, such as the Yoruba, and some northern Nigerian ethnic groups, had traditional, cultural identification marks, such as tattoo and scarification designs. These could have assisted a kidnapped and enslaved person who escaped in locating other members of their ethnic group, but few enslaved people managed to escape the colonies. In the colonies, slavers tried to dissuade the practice of traditional tribal customs. They also mixed people of different ethnic groups together to make it more difficult for them to communicate and band together in rebellion. [12]

According to the United Census Bureau, 4 percent of Nigerians hold the Ph.D. degree compared to 1% of the general US population. 17% of Nigerians hold a master's degree and 37% have a bachelor's degree. Since the mid-20th century particularly, after Nigeria gained independence, many modern Nigerian immigrants have come to the United States to pursue educational opportunities in undergraduate and post-graduate institutions. In the 1960s and 1970s after the Biafra War, Nigeria's government funded scholarships for Nigerian students, and many of them were admitted to American universities. While this was happening, there were several military coups, interspersed with brief periods of civilian rule. The instability resulted in many Nigerian professionals emigrating, especially doctors, lawyers and academics, who found it difficult to return to Nigeria. [13]

During the mid- to late-1980s, a larger wave of Nigerians immigrated to the United States[ citation needed]. This migration was driven by political and economic problems exacerbated by the military regimes of self-styled generals Ibrahim Babangida and Sani Abacha. Other émigrés comprised a large number of refugees, fleeing on account of religious persecutions, endless political unrests and ethnic/tribal conflicts, the presumption of Nigeria as a failing state, or just to enhance the quality of lives for themselves and their families (Ogbuagu, 2013). The most noticeable exodus occurred among professional and middle-class Nigerians who, along with their children, took advantage of education and employment opportunities in the United States.

This exodus contributed to a "brain-drain" of Nigeria's intellectual resources to the detriment of its future. Since the advent of multi-party democracy in March 1999, the former Nigerian head-of-state Olusegun Obasanjo has made numerous appeals, especially to young Nigerian professionals in the United States, to return to Nigeria to help in its rebuilding effort. Obasanjo's efforts have met with mixed results, as some potential migrants consider Nigeria's socio-economic situation still unstable (Ogbuagu, 2013b).

Nigerian culture has long emphasized education, placing value on pursuing education as a means to financial success and personal fulfillment. [17] Famous Nigerian Americans in education include Professor Jacob Olupona, a member of the faculty at Harvard College of Arts and Sciences as well as Harvard Divinity School. Migrating to the US from Nigeria more than 40 years ago, Professor Olupona has furthered the academic study of traditional African religions, such as the Yoruba traditional religion, and has been a vocal advocate for Nigerian Americans and education initiatives. [18]

A large percentage of black students at highly selective top universities are immigrants or children of immigrants. Harvard University, for example, has estimated that more than one-third of its black student body consists of recent immigrants or their children, or were of mixed-race parentage. [19] Other top universities, including Yale, Princeton, Penn, Columbia, Rice, Duke and Berkeley, report a similar pattern. [20] As a result, there is a question as to whether affirmative action programs adequately reach their original targets: African Americans who are descendants of American slaves and their discriminatory history in the US. [19]

According to the 2016 Open Doors report, the top five U.S. institutions with the largest student population of Nigerian descent (in no particular order) are Texas Southern University, University of Houston, University of Texas at Arlington, University of North Texas, and Houston Community College. [21][ better source needed] According to the 2017 report, 11,710 Nigerian immigrants studied in the U.S. in the 2016-17 academic year, the 12th highest country of origin and highest of any African country. [22] 4,239 of these (36%) are pursuing graduate degrees. [23]

Demography and areas of concentrated residence

See also: History of Nigerian Americans in Dallas–Fort Worth

Based on DNA studies, an estimated 80 percent of African Americans (about 35 million) could have some Igbo or Hausa ancestry. Therefore, 60 percent of them, according to historian Douglas B. Chambers, could have at least one Igbo ancestor. [24]

US states with the largest Nigerian populations

The 2012-2016 ACS [4] estimates that 277,027 American residents were born in Nigeria. It also estimates that these states have the highest Nigerian-born population: 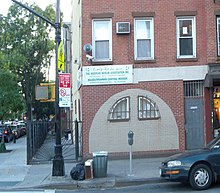 Igbo Roman Catholics in the Cathedral of Our Lady of the Angels, Los Angeles, California

In terms of religion the Nigerian community is split, Christianity (41%) and many others following Islam (47%) and other religions (2%)[ disputed – discuss].

Among Nigerian Americans, traditional Nigerian attire remains very popular[ citation needed]. However, because the fabric is often hard to acquire outside of Nigeria[ citation needed], traditional attire is not worn on an everyday basis but rather, reserved for special occasions such as weddings, Independence Day celebrations and birthday ceremonies. For weddings, the fabric used to sew the outfit of the bride and groom is usually directly imported from Nigeria or bought from local Nigerian traders and then taken to a local tailor who then sews it into the preferred style. Due to the large number of Nigerians living in America and the cultural enrichment that these communities provide to non-Nigerians, the traditional attire has been adopted in many parts of the country as a symbol of African ethnicity, for example, clothes worn during Kwanzaa celebrations are known to be very influenced by Nigerian traditional attire. In recent years, the traditional fabric has attracted many admirers especially among celebrities such as Solange Knowles [25] and most notably Erykah Badu. On the fashion runway, Nigerian American designers like Boston-born Kiki Kimanu [26] are able to combine the rich distinct colours of traditional attire with Western styles to make clothes that are highly sought after by young Nigerian professionals and Americans alike. [27]

Igbo Americans are people in the United States that maintain an identity of a varying level of Igbo ethnic group that now call the United States their chief place of residence (and may also have US citizenship). Many moved to the US following the effects of the Biafran War (1967–1970). The Igbos lived in small clans during the pre-colonial era.

Yoruba Americans are Americans of Yoruba descent. The Yoruba people ( Yoruba: Àwọ̀n ọ́mọ́ Yorùbá) are an ethnic group originating in southwestern Nigeria and southern Benin in West Africa.The first Yoruba people who arrived to the United States were imported as slaves from Nigeria and Benin during the Atlantic slave trade. This ethnicity of the slaves was one of the main origins of present-day Nigerians who arrived to the United States, along with the Igbos. In addition, native slaves of current Benin hailed from peoples such as Nago (Yoruba subgroup, although exported mainly by Spanish, when Louisiana was Spanish), Ewe, Fon and Gen. Many slaves imported to the modern United States from Benin were sold by the King of Dahomey, in Whydah.

The native tongue of the Yoruba people is spoken principally in Nigeria and Benin, with communities in other parts of Africa, Europe and the Americas. A variety of the language, Lucumi, is the liturgical language of the Santería religion of the Caribbean. [28]

Nigerian-American organizations in the US include:

Nigerian American associations representing the interests of determined groups include: