A literal model of a big apple is located outside of Citi Field, the New York Mets' ballpark.

New York City has been known by a variety of nicknames, both officially and unofficially, now and in the past. City nicknames can help in establishing a civic identity, helping outsiders recognize a community or attracting people to a community because of its nickname; promote civic pride; and build community unity. [1] Nicknames and slogans that successfully create a new community "ideology or myth" [2] are also believed to have economic value. [1] Their economic value is difficult to measure, [1] but there are anecdotal reports of cities that have achieved substantial economic benefits by " branding" themselves by adopting new slogans. [2]

New York City is frequently shortened to simply "New York", "NY", or "NYC". New York City is also known as "The City" in some parts of the Eastern United States, in particular New York State and surrounding U.S. states. [3] Other monikers have taken the form of " Hong Kong on the Hudson" or " Baghdad on the Subway", references in different cases to the city's prominence or its immigrant groups. [4] 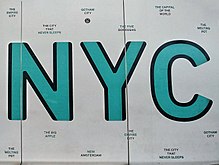 Various nicknames are featured on a wall at John F. Kennedy International Airport.