In 2015 the airport handled about 404,000 passengers. The loss of dominant air carrier AirTran in 2012 and competition from low-cost airlines at Richmond International Airport have led to more than a 60% reduction in the annual number of passengers at PHF since 2011.

In 1946 Virginia's General Assembly passed legislation creating the Peninsula Airport Commission (PAC) to determine a location for and establish a new airport or the cities of Newport News and Hampton. An agreement was reached with the US War Asset Administration in 1947 to transfer 924 acres (3.7 km2) of the former Camp Patrick Henry, a World War II US Army base, to the PAC as the site for the new airport. A Nike missile air defense base, known as N-85, still exists on the property, though abandoned since the mid-1960s.

National Airlines arrived at PHF in 1955; Allegheny Airlines (later renamed USAir) arrived in 1966. United (Capital's successor), National, Allegheny and Piedmont all operated jets to PHF, the first jets being National 727s in 1966 (runway 6 had been extended from 5600 to 6100 ft by then). Both runways were extended to their current lengths of 6526 feet (1989 m) Runway 2–20, and 8003 feet (2439 m) Runway 7–25. The airport became "Patrick Henry International Airport" in 1975. A US Customs facility was added to the terminal to allow international arrivals (airline and corporate). The airport now covers of 1,800 acres (7.3 km2), most of it in the city of Newport News and nearly half of the airfield with runways 20 and 25 in York County.

When the United States Congress deregulated the airlines in 1978, many airlines serving Patrick Henry Airport consolidated their southeast Virginia services at other airports, and Patrick Henry International Airport lost its jet flights. National pulled out in 1978, Piedmont pulled its YS11s and Allegheny Commuter replaced Allegheny in 1979, and United left in 1981. The airport led the nation in air service decline after deregulation and was facing severe financial difficulty. [2]

The turnaround began with the hiring of Charles J. Blankenship as Executive Director in 1984. [3] Blankenship implemented a strategic plan of developing a business park named Patrick Henry Commerce Center [4] and a marketing campaign to attract air carriers. [5] By 1985 the airport had the distinction of being America's fastest growing airport. That success was repeated in 1986. [6]

On December 19, 1980, the Daily Press reported a committee authorized by the PAC recommended that the airport change its name to "Newport News/Williamsburg International" to then-Executive Director Michael White. This change would not take place until ten years later. At the time, the Commission members represented the cities of Newport News, Hampton, and Williamsburg, as well as James City County and York County. Since 2010, the Commission consists of six commissioners who are appointed by the cities of Hampton (2) and Newport News (4).

Until the 1990s, part of the original terminal building was named Flight Services Building, and home to the National Weather Service. Weather reports and emergency alerts were broadcast on radio stations and weather frequencies during severe weather right from the airport.

When the original control tower was shut down in July 2007 with the opening of the 147 ft (45 m) tall new tower, it had been the oldest operating control tower on the east coast, in continuous service for 55 years.

The airport launched an expansion effort in the early 21st century. A new air traffic control tower was completed in July 2007, replacing the 1951 tower. A new three-level parking garage opened in June 2007. In 2009, more parking lots were completed to handle increased rental car fleets; parking capacity was estimated at 3,000 vehicles.

In January 2011 Delta Air Lines started two more daily flights to Atlanta on 142-seat McDonnell Douglas MD-88s, for a total of four. Service on Airbus A320s began later in the year; in 2012 Delta replaced its early morning CRJ900 with a McDonnell Douglas DC-9-80.

Frontier Airlines began nonstop service from Newport News in 2010 as the airport was finishing a $23 million renovation. Initial service included four direct flights a week to Denver on 128-seat Airbus A318s, replaced within weeks by an Airbus A319. [8] [9]

Beginning May 13, 2011, Frontier flights were operated with 162-seat Airbus A320s; as of September 12, 2011, Frontier began seasonal service. On February 4, 2012, PAC announced that Frontier will resume year-round lights, and will operate daily May 22 through Labor Day. After Labor Day, Frontier planned to operate six days per week. On January 6, 2015, Frontier Airlines withdrew service from Newport News. [10]

Allegiant Airlines also began service to the airport with flights to Orlando-Sanford, which later pulled service from the airport by 2012.

Concourse A opened in May 2010 as the airport's second concourse. Concourse A is designed with a full-service customs facility for larger jets. A local contractor donated $50,000 worth of labor and materials to expand the airport's USO office in 2010, doubling it in size to better serve military personnel.

Elite Airways announced intention to begin service with flights from PHF to Myrtle Beach, SC in 2018, but scrapped the plans due to doubts and concerns about airport operations following the failed launch of PeoplExpress Airlines and multiple investigations into the airport and lack of demand [11]. 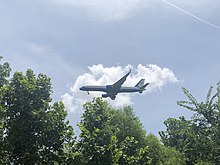 On March 9, 2012, PHF's longtime largest airline AirTran Airways ceased operations at the airport due to their merger with Southwest Airlines (which was already flying to Norfolk International Airport). Passenger count declined in 2012 after the departure of AirTran, with layoffs at the airport announced in May 2012 including police officers, all police dispatchers and other staff.

Newport News–Williamsburg is the first airport in the nation to undergo a sustainability project, to incorporate green technology in every facet of operations.[ citation needed]

In January 2014 Concourse A began to add a Federal Inspection Station and fully implement a US Customs processing facility. In 2020, additional administrative staff were laid off from positions due to declining revenues and further impacts from the COVID-19 pandemic.