The New York Wheel is a proposed 630-foot (190 m) Ferris wheel to be located at St. George in Staten Island, New York City, next to the proposed Empire Outlets retail complex.

The project was announced in 2012 as part of an initiative to make St. George into a tourist attraction. It was canceled by investors in September 2018 due in large part to lack of support from the New York City government, as well as a lack of funding. New York City mayor Bill de Blasio refused to endorse bonds citing it as too risky, and a speculative project which was supposed to be entirely privately funded.

Proposals to build a smaller New York Wheel were being discussed in May 2019.

In October 2008, developer Meir Laufer rode the London Eye and met with its lead engineer. He established a business relationship with them to bring a wheel to New York. On September 27, 2012, then-New York City Mayor Michael Bloomberg and then-New York Wheel CEO Richard Marin announced a deal to build the wheel at the St. George Waterfront District. [6]

In January 2016, The Real Deal, citing mounting lawsuits by infighting members, ran an article skeptical about the project: "Is the New York Wheel spinning out of control?" [18] In July 2017, the design and construction teams were fired [19] [20] and construction was postponed indefinitely. [21] The following month, New York Wheel LLC announced that it planned to engage American Bridge Company as the new contractor. [22]

Instead, the developers filed for bankruptcy in Delaware in December 2017. [23] As part of the bankruptcy agreement, developer New York Wheel LLC and contractor Mammoet-Starneth agreed to find funding by September 5, 2018, with the proviso that the project would be canceled if funding was not found before that date. [24] 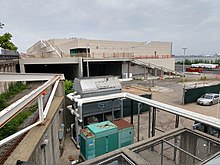 On September 21, 2018, mayor Bill de Blasio said that the now-$900-million project would not receive a bailout from the city because it was too risky to support the project with bonds. As such, the city would not support tax free status for a $380 million bond sale to complete the project. [5] [31] Investors refused to proceed with construction without city support, and stated that it would allow the parts for the Ferris wheel to be auctioned off if the city did not provide funding. [32] Subsequently, investors decided to cancel the project. [33] At this point, investors had spent $450 million on the project. [5] The official announcement of the project's cancellation was made the following month. [34]

However, the developers never terminated their lease with the city, which was still ongoing through November 2021. According to the lease agreement, the developers were to pay the city annually $1 million in rent, plus interest. though these would be deferred. By December 2018, the deferred payment amounted to $2.3 million. [35] In May 2019, it was announced that the developers were seeking new investors for a smaller wheel on the site, and that the NYCEDC was in talks with potential investors. [36] [37] [38] In August, the Staten Island Advance reported that Wheel investors and EB-5 visa investors were "actively pursuing a smaller project more like the London Eye." [39]

The designated designer and manufacturer was Mammoet-Starneth LLC, which had team members who worked on the London Eye. The New York Wheel was to have 36 passenger capsules (which were to be built by the Dutch company VDL Groep [40]), each carrying up to 40 passengers, and a total maximum capacity of 1,440 people per ride. Bloomberg's office has expected up to 30,000 passengers per day and about 4.5 million per year. [7]

The wheel was expected to create 400 construction jobs and 700 full-time jobs. [2] Four large pedestals for the wheel arrived on site in November 2016. [41] Legs for the wheel arrived in spring 2018. [42] Following the announcement of the Wheel's cancellation in late 2018, the completed portions of the wheel (namely its legs, drive towers, and capsules) were auctioned in January 2019. [43] [36]