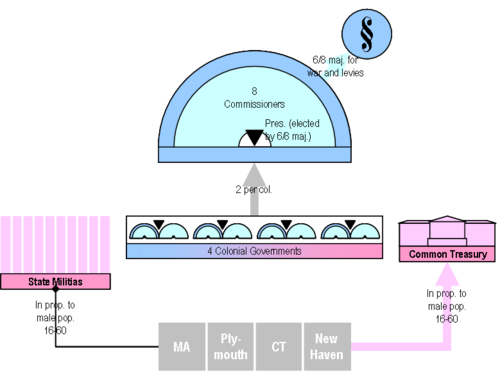 The Articles of Confederation of the United Colonies of New England, 1643

The United Colonies of New England, commonly known as the New England Confederation, was a short-lived military alliance of the New England colonies of Massachusetts Bay, Plymouth, Saybrook (Connecticut), and New Haven formed in May 1643. Its primary purpose was to unite the Puritan colonies in support of the church, and for defense against the American Indians and the Dutch colony of New Netherland. [1] It was the first milestone on the long road to colonial unity and was established as a direct result of a war that started between the Mohegan and Narragansett Indian tribes. Its charter provided for the return of fugitive criminals and indentured servants, and served as a forum for resolving inter-colonial disputes. In practice, none of the goals were accomplished. [2]

The confederation was weakened in 1654 after Massachusetts refused to join an expedition against New Netherland during the First Anglo-Dutch War, although it regained importance during King Philip's War in 1675. It was dissolved after numerous colonial charters were revoked in the early 1680s.

John Quincy Adams remarked at a meeting of the Massachusetts Historical Society on the 200th anniversary of the Confederation's founding:

The New England confederacy was destined to a life of less than forty years' duration. Its history, like that of other confederacies, presents a record of incessant discord-of encroachments by the most powerful party upon the weaker members, and of disregard, by all the separate members, of the conclusions adopted by the whole body. Still the main purpose of the union was accomplished. [3]

The colonies of New England were expanding and growing, and their contact was increasing with other European colonial settlements, as well as with surrounding Indian tribes. The New England colonial leaders, therefore, sought an alliance that would allow the colonies to coordinate a collective defense of New England. The New England leaders also felt that they were unique among the American colonies, and they hoped to band together to preserve their Puritan values. The treaty calls on the New England colonies to act as a nation, saying that they share a way of life and religion. This alliance was meant to be a perpetual mode of defense and communication among the colonies themselves and with any foreign entities. [4]

The treaty outlining the alliance contained the following clauses, in summary: [5]

Quincy Adams, John, ed. (1843). The New England Confederacy A Discourse delivered before the Massachusetts Historical Society, at Boston, on the 29th of May 1843; In Celebration of the Second Centennial of that Event. Charles C. Little and James Brown.