Naval Station Norfolk is a United States Navy base in Norfolk, Virginia, that is the headquarters and home port of the U.S. Navy's Fleet Forces Command. The installation occupies about 4 miles (6.4 km) of waterfront space and 11 miles (18 km) of pier and wharf space of the Hampton Roads peninsula known as Sewell's Point. It is the world's largest naval station, with the largest concentration of U.S. Navy forces through 75 ships alongside 14 piers and with 134 aircraft and 11 aircraft hangars at the adjacently operated Chambers Field. [1] Port Services controls more than 3,100 ships' movements annually as they arrive and depart their berths.

Air Operations conducts over 100,000 flight operations each year, an average of 275 flights per day or one every six minutes. Over 150,000 passengers and 264,000 tons of mail and cargo depart annually on Air Mobility Command (AMC) aircraft and other AMC-chartered flights from the airfield's AMC Terminal. [2] 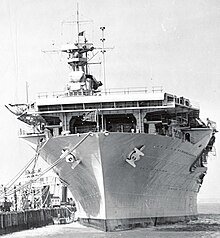 The area where the base is located was the site of the original 1907 Jamestown Exposition. [3]

In 1915, the Headquarters of the 5th Naval District was established. In April 1917, shortly after the United States entered World War I, a bill was passed for the purchase of the land, and money was set aside in the amount of $1.6 million for the development of the base. The Naval Operating Base (NOB) and other facilities were established. By 1918, there were 34,000 enlisted men at the base. [3] However, by the war's end, the base was reduced in personnel and put into a "standby mode." [4] 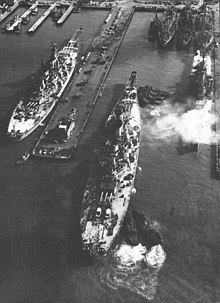 USS New Jersey and USS Missouri at NS Norfolk in 1954.

When World War II began in Europe in 1939, the base became more active again. New facilities were built, including new runways for aircraft, part of Naval Air Station Norfolk. It also had ramps built to be used by seaplanes to be operated by the Navy during the war. [3] About 400 acres was acquired and, by 1943, the air station had become a central airfield for operations. Due to the expansion, it contributed to ending the war because of the training it provided to naval air units. [5]

In March 1946, the Chief of Naval Operations ordered the Commandant of the 5th Naval District to place NOB Norfolk and NAS Norfolk as separate installations under the command of Commandant Naval Base, whose title was soon changed to Commander, Navy Region, Mid-Atlantic. [6]

Following World War II, NOB Norfolk became the primary base of the Atlantic Fleet. It was one of the largest naval bases in the world.

On 1 January 1953, the name of the naval base was officially changed to Naval Station Norfolk (NS Norfolk), after being known as the NOB. [5]

In 1968, the Naval Air Station was given a major role in John F. Kennedy's vision of putting a man on the moon. The air station became Recovery Control Center Atlantic, which provided command, control, and communications for the ships and aircraft that participated in the recovery operations of Apollo 7. [5]

Following the attack on USS Cole and 11 September 2001 terrorist attacks, the base had some major upgrades to its security gates, costing more than $12.5 million. [5]

On 26 January 2017, NS Norfolk celebrated its centennial at the Pennsylvania House, an historical building built for the Jamestown Exposition, [7] located on the base. [8]

On Easter (3 April) of 1988, members of the anti-nuclear group Plowshares boarded the battleship USS Iowa with visitors for a ship's tour and left their group to do symbolic damage to the ship's empty Tomahawk missile launchers, using hammers and their own blood. [9]

On March 24, 2014, a shooting at NS Norfolk resulted in the death of a Sailor and a civilian. The shooting occurred around 11:20 p.m. EDT aboard USS Mahan. Security forces shot and killed the civilian who had allegedly shot the Sailor aboard the vessel. [10] The base was closed for a short time after the shooting on USS Mahan. [11]

Naval Station Norfolk is home port of four carrier strike groups and their assigned ships. In addition, the Naval Station plays host to several Military Sealift Command ships, as well as the submarines of the Atlantic Fleet.

As of June 2017, the following operational units are headquartered or homeported at Naval Station Norfolk:

In addition to the several operational units, Naval Station Norfolk is also headquarters to a number of shore activities that provided administrative and specialty support to regional operational assets, and in some cases, the entire Navy.

This article incorporates  public domain material from websites or documents of the United States Navy.