The National Congress of American Indians (NCAI) is an American Indian and Alaska Native [2] rights organization. It was founded in 1944 [3] to represent the tribes and resist federal government pressure for termination of tribal rights and assimilation of their people. These were in contradiction of their treaty rights and status as sovereign entities. The organization continues to be an association of federally recognized and state-recognized Indian tribes.

Historically the Indian peoples of the North American continent rarely joined forces across tribal lines, which were divisions related to distinct language and cultural groups. One reason was that most tribes were highly decentralized, with their people seldom united around issues.

In the 20th century, a generation of Native Americans came of age who were educated in multi-tribal boarding schools. They began to think with a broad pan-Native American vision, and they learned to form alliances across tribes. They increasingly felt the need to work together politically in order to exert their power in dealing with the United States federal government. In addition, with the efforts after 1934 to reorganize tribal governments, activists believed that Indians had to work together to strengthen their political position. Activists formed the National Congress of American Indians to find ways to organize the tribes to deal in a more unified way with the US government. They wanted to challenge the government on its failure to implement treaties, to work against the tribal termination policy, and to improve public opinion of and appreciation for Indian cultures.

The initial organization of the NCAI was done largely by Native American men who worked for the Bureau of Indian Affairs, and represented many tribes. Among this group was D'Arcy McNickle of the BIA.[ citation needed] At the second national convention, Indian women attended as representatives in numbers equal to the men. The convention decided that BIA employees should be excluded from serving as general officers or members of the executive committee. The first president of the NCAI was Napoleon B. Johnson, a judge in Oklahoma. Dan Madrano ( Caddo) was the first secretary-treasurer; he also had been serving as an elected member of the Oklahoma State Legislature. [4] From 1945 to 1952, the executive secretary of the NCAI was Ruth Muskrat Bronson ( Cherokee), who established the organization's legislative news service. [5] [6] Bronson's work was largely voluntary, as the organization could not afford to pay her to act as its executive secretary. [7]

In 1950 John Rainer became the first paid executive director of NCAI [8]. He was replaced by Bronson in 1951, who resigned in 1952. Frank George, a Nez Perce from the Colville Indian Reservation, briefly held the post [6] before Helen Peterson ( Cheyenne- Lakota) took over the post as the executive director of the organization in 1953. That same year, W. W. Short replaced Johnson as president of NCAI. [9] In 1954, Short was replaced by Joseph Garry ( Coeur d'Alene), a veteran of both World War II and the Korean War. Garry significantly enlarged the organizational direction away from its focus on issues of Native Americans in the Great Plains and the Southwest, making it more inclusive of tribes in the Midwest and Northwest. [10]

In 1966, the NCAI mustered nearly 80 tribal leaders from 62 tribes to protest their exclusion from a US-Congress sponsored conference on reorganizing the BIA (Bureau of Indian Affairs). The Congressional event was organized by Morris Udall, chairman of the House Committee on Interior and Insular Affairs, to discuss the reorganization of the Bureau of Indian Affairs. Udall eventually allowed the NCAI representatives to attend. He confirmed that a group composed of tribe members, called the Tribal Advisory Commission, would be created to advise him. [11]

During the late 20th century, NCAI contributed to gaining legislation to protect and preserve Indian culture, including NAGPRA. They worked with the tribes to assert their sovereignty in dealing with the federal government.

In the early 21st century, key goals of the NCAI are:[ citation needed]

In 2017, the NCAI took over the assets of the Indian Country Media Network, which were donated by the Oneida Nation of New York. It had owned and operated the network for some time. The NCAI continues to operate the news service, primarily online. It reports on Native American news and has especially covered politics in depth. [12]

The NCAI Constitution says that its members seek to provide themselves and their descendants with the traditional laws, rights, and benefits. It lists the by-laws and rules of order regarding membership, powers, and dues. There are four classes of membership: tribal, Indian individual, individual associate, and organization associate. Voting right is reserved for tribal and Indian individual members. According to section B of Article III regarding membership, any tribe, band or group of American Indians and Alaska Natives shall be eligible for tribal membership provided it fulfills the following requirements [13]

The organizational structure of the National Congress of American Indians includes a General Assembly, an Executive Council, and seven committees. The up-and-coming[ when?] executive Board of the NCAI is as follows:

The current chief executive officer of the National Congress of American Indians is Kevin Allis, member of the Forest County Potawatomi Community in Wisconsin.

Every tribe gets a number of votes allocated to them specific to the size of each tribe.

The successes of the NCAI over these years have been a policy of non-protesting. During the 1960s NCAI carried a banner with the slogan, "INDIANS DON'T DEMONSTRATE." [15] 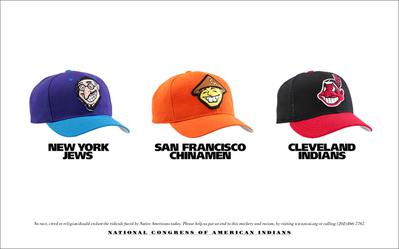 The advertising firm of DeVito/Verdi created a poster for the NCAI to highlight stereotypical Native American mascots.

The NCAI is fighting for improved living conditions on reservations, arguing that 560 tribes are federally recognized but fewer than 20 tribes gain profits from casinos to turn the tribe's economy around.[ citation needed]According to the NCAI website, other current issues and topics include:

In 2001, the advertising firm of DeVito/Verdi created an advertising campaign and poster for the NCAI to highlight offensive and racist sports team images and mascots. [18] In October 2013, the NCAI published a report on sports teams using harmful and racial "Indian" mascots. [19]

Representatives of various tribes attending organizational meeting, 1944; all were alumni of the Carlisle Indian School