The National Archives and Records Administration (NARA) is an independent agency of the United States government charged with the preservation and documentation of government and historical records. It is also tasked with increasing public access to those documents which make up the National Archive. [7] NARA is officially responsible for maintaining and publishing the legally authentic and authoritative copies of acts of Congress, presidential directives, and federal regulations. NARA also transmits votes of the Electoral College to Congress. [8]

Main article: Organization of the National Archives and Records Administration

The Archivist of the United States is the chief official overseeing the operation of the National Archives and Records Administration. The Archivist not only maintains the official documentation of the passage of amendments to the U.S. Constitution by state legislatures, but has the authority to declare when the constitutional threshold for passage has been reached, and therefore when an act has become an amendment.

The National Historical Publications and Records Commission (NHPRC)—the agency's grant-making arm—awards funds to state and local governments, public and private archives, colleges and universities, and other nonprofit organizations to preserve and publish historical records. Since 1964, the NHPRC has awarded some 4,500 grants.

The Office of Government Information Services (OGIS) is a Freedom of Information Act (FOIA) resource for the public and the government. Congress has charged NARA with reviewing FOIA policies, procedures and compliance of Federal agencies and to recommend changes to FOIA. NARA's mission also includes resolving FOIA disputes between Federal agencies and requesters.

The Rotunda of the National Archives Building, where the Charters of Freedom documents are publicly exhibited

Originally, each branch and agency of the U.S. government was responsible for maintaining its own documents, which often resulted in the loss and destruction of records. Congress created the National Archives Establishment in 1934 to centralize federal record keeping, with the Archivist of the United States serving as chief administrator. R.D.W. Connor was chosen to be the first leader of the organization. [9]

After a recommendation by the first Hoover Commission in 1949, the National Archives was placed within the newly formed General Services Administration (GSA). NARA was officially given its independence from the GSA with the passing of the Records Administration Act of 1984, thus giving birth to the institution we have today. [10]

In December 1978, millions of feet of news reels were destroyed in a fire at an offsite location in Suitland, Maryland. [11] The reels, made of exceptionally flammable nitrate material, had been donated previously by Universal Pictures and were stored in special vaults to protect against fires. In total over 12.6 million feet of film was destroyed. [11]

In March 2006, it was revealed by the Archivist of the United States in a public hearing that a memorandum of understanding between NARA and various government agencies existed to "reclassify", i.e., withdraw from public access, certain documents in the name of national security, and to do so in a manner such that researchers would not be likely to discover the process (the U.S. reclassification program). [12] An audit indicated that more than one third withdrawn since 1999 did not contain sensitive information. [13] The program was originally scheduled to end in 2007.

The National Archives found itself under public scrutiny when it initially agreed, in 2017, to requests from the U.S. Immigration and Customs Enforcement agency (ICE) to allow certain documents be scheduled for destruction. [15]

NARA's holdings are classed into "record groups" reflecting the governmental department or agency from which they originated. [16] Records include paper documents, microfilm, still pictures, motion pictures, and electronic media.

Archival descriptions of the permanent holdings of the federal government in the custody of NARA are stored in the National Archives Catalog. [17] The archival descriptions include information on traditional paper holdings, electronic records, and artifacts. [18] As of December 2012, the catalog consisted of about 10 billion logical data records describing 527,000 artifacts and encompassing 81% of NARA's records. [19] There are also 922,000 digital copies of already digitized materials. [19]

Most records at NARA are in the public domain, as works of the federal government are excluded from copyright protection. However, records from other sources may still be protected by copyright or donor agreements. [20] Executive Order 13526 directs originating agencies to declassify documents if possible before shipment to NARA for long-term storage, [21] but NARA also stores some classified documents until they can be declassified. Its Information Security Oversight Office monitors and sets policy for the U.S. government's security classification system. 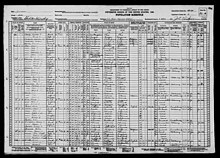 Most people who access records at NARA are genealogists or family historians. [22] While many records are available online through the National Archives Catalog, individuals can also request paper copies and microfilm scans. When applicable, the catalog will indicate a document's physical location in a National Archives facility.

Census records are among the most frequently requested at NARA, with the oldest entries from 1790. [23] These records often contain information such as addresses and names of family members. However, all pieces of personal data are restricted for 72 years after collection; prior to then, federal agencies can only access statistical data. [24] The newest unrestricted census is from 1940 and was released to the general public in April 2012. The subsequent census from 1950 will be released in 2022.

NARA has also collaborated with Ancestry.com, Fold3.com, and Familysearch.org to scan microfilms and documents of genealogical interest. [25] These digitization partners have expanded the number of genealogical sources on their respective websites, such as ship passenger lists and military records. NARA will eventually offer free access to all digitized sources through the National Archives Catalog. [26] However, many file collections are not available for public viewing either through NARA or affiliate websites. This includes naturalization records and vital records that reveal extensive personal data. Depending on a requestor's verifiable relation to a subject of interest, restricted files may be obtainable under the Freedom of Information Act (FOIA). [27]

Since 2005, NARA has held annual Genealogy Fairs with guest speakers and research workshops. [28] These events are free of charge and are designed for interested individuals of any skill level. Materials from past Genealogy Fairs are available on the National Archives website.

The most well known facility of the National Archives and Records Administration is the National Archives Building (informally known as "Archives I"), located north of the National Mall on Constitution Avenue in Washington, D.C.. A sister facility, known as the National Archives at College Park ("Archives II") was opened 1994 near the University of Maryland, College Park. The Washington National Records Center (WNRC), also located in the Washington, D.C., metropolitan area, is a large warehouse facility where federal records that are still under the control of the creating agency are stored. Federal government agencies pay a yearly fee for storage at the facility. In accordance with federal records schedules, documents at WNRC are transferred to the legal custody of the National Archives after a certain time; this usually involves a relocation of the records to College Park. Temporary records at WNRC are either retained for a fee or destroyed after retention times have elapsed. WNRC also offers research services and maintains a small research room.

In April 2019 an unknown person set fire to an exterior wall of the archives building using a homemade incendiary device before firefighters were able to extinguish the flames. [30]

In an effort to make its holdings more widely available and more easily accessible, the National Archives began entering into public–private partnerships in 2006. A joint venture with Google will digitize and offer NARA video online. When announcing the agreement, Archivist Allen Weinstein said that this pilot program is

... an important step for the National Archives to achieve its goal of becoming an archive without walls. Our new strategic plan emphasizes the importance of providing access to records anytime, anywhere. This is one of many initiatives that we are launching to make our goal a reality. For the first time, the public will be able to view this collection of rare and unusual films on the Internet. [31]

On January 10, 2007, the National Archives and Fold3.com (formerly Footnote) [32] launched a pilot project to digitize historic documents from the National Archives holdings. Allen Weinstein explained that this partnership would "allow much greater access to approximately 4.5 million pages of important documents that are currently available only in their original format or on microfilm" and "would also enhance NARA's efforts to preserve its original records." [33]

In July 2007, the National Archives announced it would make copies of its collection of Universal Newsreels from 1929 to 1967 available for purchase through CreateSpace, an Amazon.com subsidiary. During the announcement, Weinstein noted that the agreement would "... reap major benefits for the public-at-large and for the National Archives." Adding, "While the public can come to our College Park, Maryland, research room to view films and even copy them at no charge, this new program will make our holdings much more accessible to millions of people who cannot travel to the Washington, D.C. area." The agreement also calls for CreateSpace partnership to provide the National Archives with digital reference and preservation copies of the films as part of NARA's preservation program. [34]

The National Archives currently utilizes social media and Web 2.0 technologies in an attempt to communicate better with the public. [35]

On June 18, 2009, the National Archives announced the launching of a YouTube channel "to showcase popular archived films, inform the public about upcoming events around the country, and bring National Archives exhibits to the people." [36] Also in 2009, the National Archives launched a Flickr photostream to share portions of its photographic holdings with the general public. [37] A new teaching-with-documents Web site premiered in 2010 and was developed by the education team. The site [38] features 3,000 documents, images, and recordings from the holdings of the Archives. It also features lesson plans and tools for creating new classroom activities and lessons.

In 2011, the National Archives initiated a WikiProject on the English Wikipedia to expand collaboration in making its holdings widely available through Wikimedia.

In January 2020, a Washington Post reporter noticed blurred protest signs in an image of the 2017 Women's March at the Archives' public exhibit. Some of the edited signs contained potentially offensive language, and some mentioned president Donald Trump. Besides censoring language, the changes altered the meaning of some protest signs. The agency defended the edits and said they were made "so as not to engage in current political controversy", but admitted it "made a mistake ... we were wrong to alter the image." [39] [40] [41]

This article incorporates  public domain material from websites or documents of the National Archives and Records Administration.