Nathaniel Lyon (July 14, 1818 – August 10, 1861) was the first Union general to be killed in the American Civil War. He is noted for his actions in Missouri in 1861, at the beginning of the conflict, to forestall secret secessionist plans of the governor Claiborne Jackson.

He had fought in the Second Seminole War in Florida and the Mexican–American War. After being assigned to Kansas, where many residents were divided about slavery and the Union, he developed strong pro-Union views. In February 1861, Lyon was made commander of the Union arsenal in St. Louis, Missouri (another divided state). Suspicious of governor Claiborne, who was working with Jefferson Davis on a secret plan for secession, Lyon forced the surrender of the pro-Confederate militia.

Some civilians rioted and Lyon’s troops fired into the crowd ( Camp Jackson Affair). Lyon was promoted brigadier-general and given command of Union troops in Missouri. He was killed at the Battle of Wilson’s Creek, while trying to rally his outnumbered soldiers. But Lyon’s efforts had prevented the State of Missouri from joining the Confederacy. 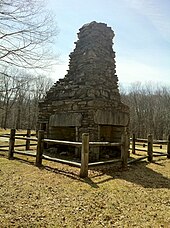 A stone chimney with four fireplaces is all that is left of General Nathaniel Lyon's birthplace homestead at Nathaniel Lyon Memorial State Park.

Lyon was born in 1818 on a farm in Ashford, Connecticut, now in the Town of Eastford, the son of Amasa and Kezia (Knowlton) Lyon. He had a brother, William H. Lyon. [1] [2] As a boy he hated farming.

His relatives had fought in the American Revolutionary War, and Lyon was determined to follow in their footsteps. In 1837 he applied to the United States Military Academy, was admitted, and in 1841 graduated eleventh in his class of 52 cadets.

Upon graduating from West Point, Lyon was commissioned as a 2nd lieutenant and assigned to the 2nd U.S. Infantry Regiment after graduation and served with them in the Seminole Wars and the Mexican–American War. Despite denouncing American involvement in the Mexican War, [3] he was promoted to first lieutenant for "conspicuous bravery in capturing enemy artillery" at the Battle for Mexico City and received a brevet promotion to captain for the battles of Contreras and Churubusco. Although he was eligible for membership, Lyon did not join the Aztec Club of 1847 when it was formed in Mexico City in 1847.

After the Mexican War, Lyon was then posted to the frontier, where he participated in the massacre of Pomo Native Americans at Clear Lake, California, the 1850 " Bloody Island Massacre"; [4] as many as 100 old men, women and children were killed.

After being reassigned to Fort Riley, Kansas, Lyon became staunchly antislavery. He did not support the radicalism of the abolitionists, [5] and came to support the Republican Party while serving in the border wars known as " Bleeding Kansas." In January 1861, he wrote about the secession crisis, "It is no longer useful to appeal to reason, but to the sword." [1]

Monument to Nathaniel Lyon with the arsenal in the background

In March 1861, shortly before the outbreak of the American Civil War, Lyon arrived in St. Louis in command of Company B of the 2nd U.S. Infantry. At the time the population and state of Missouri were relatively neutral in the dispute between North and South, but Governor Claiborne F. Jackson was a strong Southern sympathizer, as were many of the state legislators. Lyon guessed correctly that Jackson would seize the federal arsenal in St. Louis if the state seceded and that the Union had insufficient defensive forces to prevent the seizure. He attempted to strengthen the defenses, but came into opposition from his superiors, including Brig. Gen. William S. Harney of the Department of the West. Lyon employed his friendship with Francis P. Blair, Jr., to have himself named commander of the arsenal. When the Civil War broke out and President Abraham Lincoln called for troops to put down the Confederacy, Missouri was asked to supply four regiments. Governor Jackson refused the request and ordered the Missouri State Guard to muster outside St. Louis under the stated purpose of training for home defense. [1] 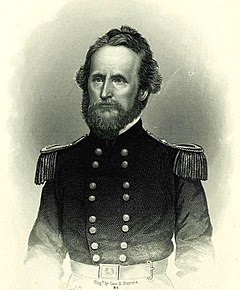 Lyon himself had been extensively involved in the St. Louis Wide Awakes, a pro-union paramilitary organization that he intended to arm from the arsenal and muster into the ranks of the federal army. Upon obtaining command of the arsenal, Lyon armed the Wide Awake units under guise of night. Lyon had most of the excess weapons in the arsenal secretly moved to Illinois. Lyon was aware of a clandestine operation whereby the Confederacy had shipped captured artillery from the U.S. arsenal in Baton Rouge to the Missouri State Militia camp in St. Louis. Lyon allegedly disguised himself as a farm woman to spy on the State Guard's camp and then claimed that he had uncovered a plan by Jackson to seize the arsenal for Missouri troops.

On May 10 Lyon directed the Missouri volunteer regiments and the 2nd U.S. Infantry to the camp, forcing its surrender. Riots broke out in St. Louis as Lyon marched his prisoners through the city to the St. Louis Arsenal. The event provoked the Camp Jackson Affair of May 10, 1861, in which Lyons' troops opened fire on a crowd of civilians injuring at least 75 and killing 28. [1] Two federals and three militia were also killed and others were wounded. The source of the first shot is disputed, some witnesses claiming it was a drunken rioter, others claiming it was unprovoked. Lyon was nonetheless promoted to brigadier general May 17. [6] and given command over the Union troops in Missouri May 31, 1861 as commander of the Department of the West.

On June 12, 1861 Lyon (accompanied by Congressman Colonel Francis P. Blair, Jr.) met with Governor Jackson and Major General Sterling Price of the Missouri State Guard (who both traveled under a safe conduct from Lyon) at St. Louis' Planter's House hotel to discuss the implementation and potential continuation of the Price–Harney Truce between Federal forces and the State Guard. The discussions were conducted largely between Lyon and Jackson, who were generally intransigent in their respective positions: that U.S. forces had the right to move anywhere in the state, and that Federal forces should be restricted to the St. Louis-area, respectively. After four unproductive hours Lyon eventually halted the meeting, informing Governor Jackson and MG Price that Jackson's demanded limitations on federal authority "means war". Lyon then allowed the two to leave St. Louis for Jefferson City by train, in accordance with the safe conduct. [7]

The governor fled first to the capitol at Jefferson City (ordering the tracks destroyed behind him), and then retreated with the State Guard to Boonville. Lyon moved up the Missouri River by steamer and occupied Jefferson City without a fight on June 13. Lyon continued the pursuit and on June 17 he defeated a portion of the State Guard at the Battle of Boonville. The governor, his administration, and the Guard retreated to the southwest. Lyon was subsequently supported by the reconvened Missouri State Convention which reconvened on July 22, 1861, declared the office of Governor and other state officials "vacant", and appointed a Unionist provisional state government under former Missouri Chief Justice Hamilton Gamble. Lyon assumed command of the Army of the West on July 2. [6] Lyon reinforced his army before moving southwest in pursuit of Jackson, Price and the State Guard. [1] [8] [9]

Battle of Wilson's Creek and death

By July 13, Lyon was encamped at Springfield, Missouri, with about 6,000 Union soldiers. The Missouri State Guard, about 75 miles southwest of Lyon and under the command of Price, met with troops under Brig. Gen. Benjamin McCulloch near the end of July. The combined Confederate forces numbered about 12,000, formed plans to attack Springfield, and marched northeast on July 31.

The armies met at dawn a few miles southwest of Springfield on the morning of August 10 in the Battle of Wilson's Creek. Lyon was wounded twice in the fighting; shot in the head and leg [6] and his horse shot from under him. He returned to Union lines and commandeered a bay horse ridden by Maj. E.L. McElhaney of the Missouri Infantry. [10] [11] Lyon, badly outnumbered by Confederate forces, then dramatically led a countercharge of the 2nd Kansas Infantry on Bloody Hill, where he was shot in the heart at about 9:30 am. Although the Union Army was defeated at Wilson's Creek, Lyon's quick action neutralized the effectiveness of pro-Southern forces in Missouri, allowing Union forces to secure the state. [1] According to a witness General Lyon was killed by a soldier named John Morgan after he was completely surrounded by Confederate soldiers. He said "The bravest man I ever saw was General Lyon. He picked up rocks and fought with thousands of men around him. He then said “General Lyon struck Will Morgan in the face with a rock, and John Morgan shot him dead with an old Fashion horse pistol." [12]

In the confused aftermath of the Union retreat from Wilson's Creek, Lyon's body was mistakenly left behind on the battlefield and discovered by Confederate forces. It was briefly buried on a Union soldier's farm outside Springfield until it could be returned to Lyon's relatives. Eventually the remains were interred at the family plot in Eastford, Connecticut, where an estimated crowd of 15,000 attended the funeral. A cenotaph stands in memory of Lyon in the Springfield National Cemetery, Missouri. [6]

Lyon was slight of figure with a shabby appearance; his boots were often unpolished, his uniform was often faded, and his insignia were often tarnished. Nonetheless, the men under his command were said to have respected him. Lyon was known for his love of mustard, and was often seen by his troops to be slathering it on thick slices of bread, even in the midst of battle. He never married but had one unnamed son; it is often written that he bequeathed all his property to the federal government of the United States, but this is disputed.[ citation needed]

On December 24, 1861, the United States Congress passed a resolution of thanks for the "eminent and patriotic services of the late Brigadier General Nathaniel Lyon. The country to whose service he devoted his life will guard and preserve his fame as a part of its own glory. That the Thanks of Congress are hereby given to the brave officers who, under the command of the late general Lyon sustained the honor of the flag and achieved victory against overwhelming numbers at the battle of Springfield, Missouri." [6]

The 24th Missouri Volunteer Infantry was recruited as "The Lyon Legion" in honor of the General, and carried a unique regimental color, depicting a Lion beneath a constellation of six stars. Counties in Iowa, Kansas, Minnesota, and Nevada, are named in Nathaniel Lyon's honor. [13] Two forts were also named in his honor: Fort Lyon in Colorado and Fort Lyon (Virginia), which defended Washington, D.C., during the American Civil War. Lyon Park in St. Louis, Lyon Street in San Francisco and Lyon Lane in Carson City, Nevada are also named for him.

General Nathaniel Lyon camped near Windsor, Missouri (southeast of Kansas City) in 1861. The small settlement is almost abandoned now, but had a postmaster until 1901. A water well still exists there which was dug by General Lyon's men and it is reported that on Duck Creek one can still find graffiti carved in the rocks from 1861.